Scott Roewer, the founder of The Organizing Agency, contacted us for advice about how to paint a “herd of foam aliens” for the Halloween display he was working on. Having seen the type of Halloween decor The Organizing Agency has created in the past, we were eager to help. Scott had created Planet Pumpkin for a client using a variety of different items, including foam pumpkins, pool noodles, and beach umbrellas. The problem was, he couldn’t get paint to stick to any of it. After a whirlwind of testing, he discovered that Rosco CrystalGel could be used as a primer for painting foam and synthetic fabrics. Scott found that the CrystalGel stuck to everything he needed it to – and then the paint stuck to the CrystalGel.

Scott created Planet Pumpkin last year. The display was a success, but he was disappointed by two aspects of the installation. A.) A lot of his painting work had either faded or had chipped/flaked off. This was especially true for the pumpkin-headed aliens he created to inhabit Planet Pumpkin. B.) He wanted the aliens to glow brighter in the black light that the display was bathed in. 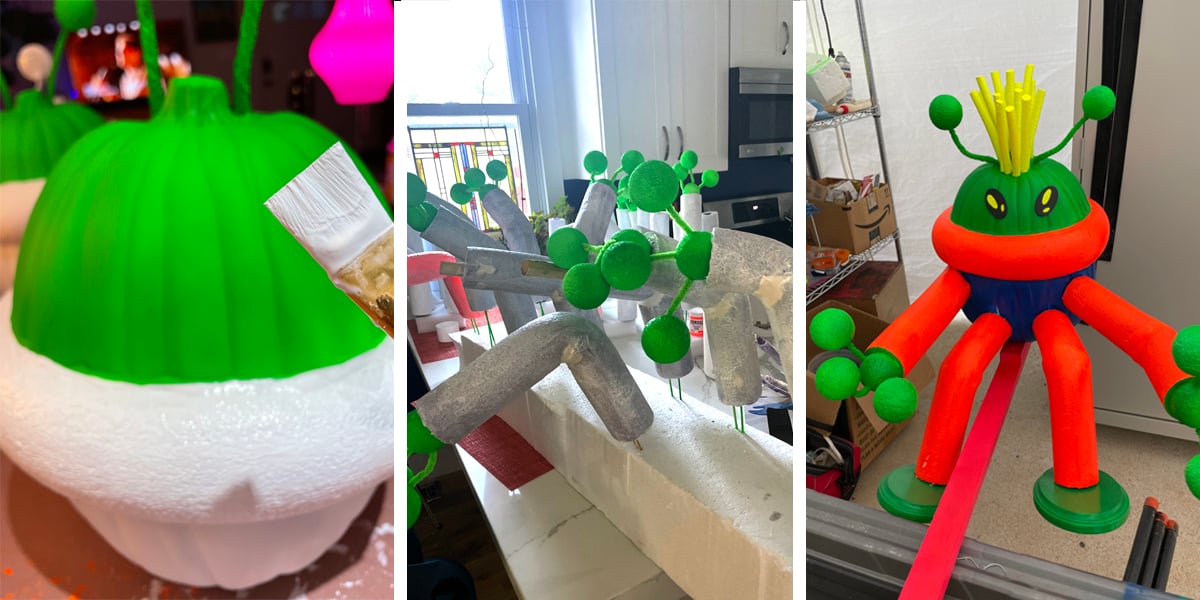 The alien bodies were comprised of foam pumpkins with pool noodles wrapped around them. Scott also used pool noodles to create the arms and legs. “When it came to the aliens,” Scott reported, “I couldn’t get the paint to stick to anything.” So, he tested a variety of different materials and found that the CrystalGel bonded with the foam better than anything else. Scott used CrystalGel to prime the arms, legs, antennae, and torso of every Planet Pumpkin alien.

One thing that Scott appreciated most about using CrystalGel as a primer for painting foam was how flexible everything remained once it dried. This was particularly noticeable when looking at the aliens on the teeter-totter part of the display. One of the aliens has long, thick strands of hair that Scott made using foam weather-stripping tubes. The CrystalGel allowed the alien’s hair to flow and bounce “naturally” as it moved up & down on the teeter-totter. Now that he had a surface he could paint on, Scott repainted his aliens so that they would glow brighter in the black light. First Scott applied a white basecoat, which helps the brightness level of the fluorescent paint. From there, he applied four coats of Rosco VividFX Fluorescent Paint – #6258 Deep Blue on the bottom half of the torso and #6262 Deep Green on the feet. In order to get the paint into the valleys of the pumpkin bodies, he brushed the paint onto the torso areas, and he used a sponge brush to paint the feet. To maximize his time, Scott used fluorescent spray paint on the other areas of the aliens.

Scott made his alien spaceships out of beach umbrellas with plastic bowls attached to them and glowing LED rope lights streaming below. His design gave them that “Classic UFO” look. Unfortunately, Scott had the same issue painting the UFOs – he couldn’t get paint to stick to the fabric of the umbrella or the plastic bowls. “Last year’s paint job cracked when I closed up the umbrellas for storage,” he reported.

As he was applying the CrystalGel to the alien bodies, Scott tested some of it on one of his UFO umbrellas. It stuck to the nylon fabric of the umbrella perfectly to provide a uniform primed surface that his paint could stick to. Scott reported that he ended up applying two thin coats of CrystalGel to the umbrellas. He found that the two coats made the nylon stiffer and more robust. He also primed the plastic bowls with CrystalGel so that the fluorescent paint wouldn’t chip off like it did last year.

In the heart of the Planet Pumpkin display a pair of aliens teeter-totter around an arrangement of glowing, inter-planetary flowers. Knowing from experience that his fluorescent paint wasn’t going to stick to the synthetic petals of his “Dollar Store flowers,” Scott primed them with CrystalGel. Scott figured out a way to spray the CrystalGel. This enabled him to efficiently prime all of the plastic leaves and delicate nylon petals in the display. He diluted the CrystalGel with water until it had enough viscosity that it could come out of the nozzle of his spray bottle. Then he applied multiple coats – up to 10 coats in some cases – with his diluted CrystalGel mixture until he had an adequate surface to paint.

When it was all said and done, both Scott – and his client – were very pleased with the upgrades for Planet Pumpkin. The fluorescent colors of the display glowed brighter than they did last year, and Scott is confident that the paint will end up lasting longer now that everything has been primed with Rosco CrystalGel.

3 Things To Improve Your Photography: Color, Fog And Magic