As filming begins for Jessica Jones season 3, so too do rumors about returning and possible new characters, plot twists and release dates. While we can’t provide answers to any of those questions, we can give you a look behind the scenes at backdrops used on previous seasons of Jessica Jones and fellow Marvel-Netflix shows, Luke Cage and Iron Fist. Cinematographer Manuel Billeter, Production Designer Loren Weeks and Art Director Toni Barton shared how they created some of the iconic Marvel series sets with Rosco SoftDrop. 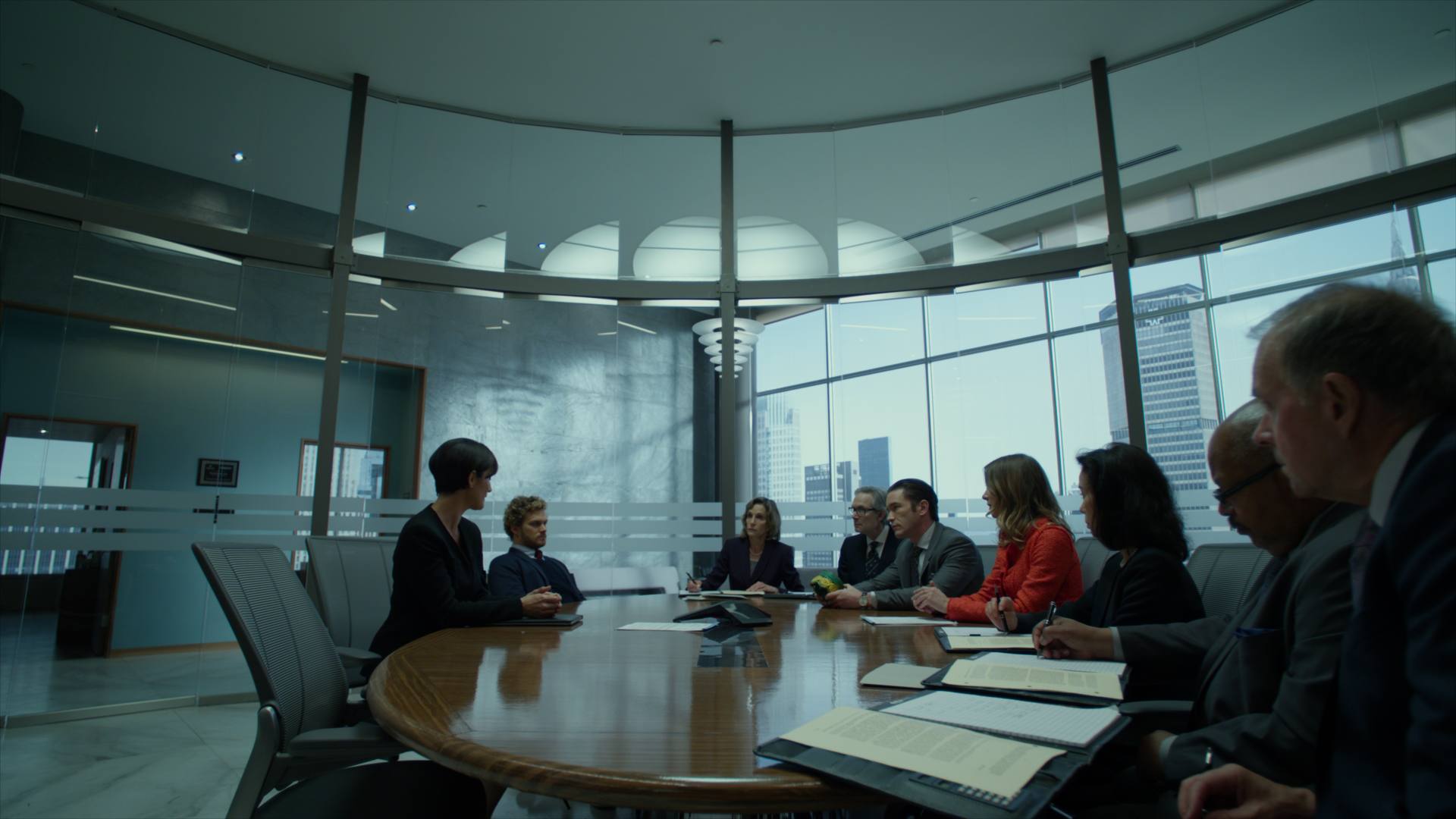 A Rosco SoftDrop of Midtown Manhattan is featured behind the Rand Corporation set in "Iron Fist."

When the team first embarked upon creating the sets for Jessica Jones season 1, Weeks and Barton knew they wanted to photograph existing NYC cityscapes as opposed to compositing a library of stock images. They consulted with Phil Greenstreet at Rosco, who referred them to SoftDrop as an innovative, day/night backdrop alternative to the vinyl backings they were familiar with. “Phil has the backdrop photography down to a science, and I love working with him,” said Barton. “When Phil started sending us samples, Manuel, Loren and I were amazed. The SoftDrops were so beautiful, and the look is awesome.” 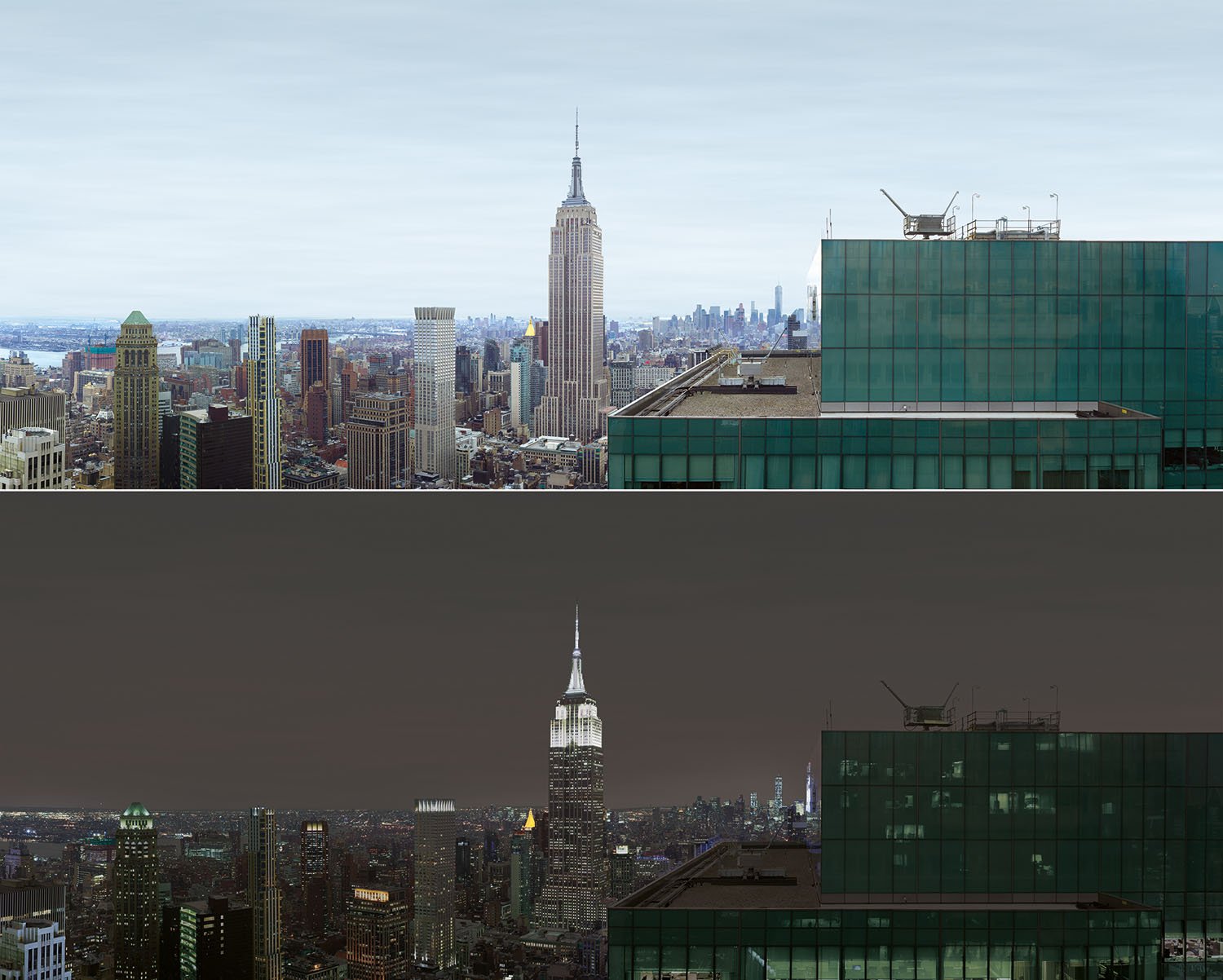 The Day & Night photo files used to create the SoftDrop outside of Hogarth's office.

As the production designer, Weeks oversaw the production of the SoftDrops, but it was a collaborative effort between the Art Department and the DP. Weeks always included Billeter in the conception to ensure he was onboard with the design so he could properly light the SoftDrop after it was finalized and installed on set. “We chose to go with the Rosco SoftDrops starting with Jessica Jones because they looked a little softer and more naturalistic and didn’t give off a glare like vinyl drops do,” said Billeter. The team has since used the SoftDrops on Jessica Jones season 2, Luke Cage seasons 1 and 2 and Iron Fist season 1. One of the sets for Jessica Jones was Hogarth’s law firm office, which was photographed on location in Manhattan from the Bank of America Building looking south with the Empire State Building featured prominently in the shot. Rosco photographed during the day and night since this SoftDrop was going to be used for both day and evening scenes. “For day, I used the ambient light coming from the space lights hung near the ceiling to mimic sunlight coming from above,” said Billeter. “For night, I used a few gelled Cyc lights from below and Leko Source Four units cut down to light specific buildings to avoid light spilling into the sky.” Billeter was surprised overall at how little light he needed to light the night SoftDrops. 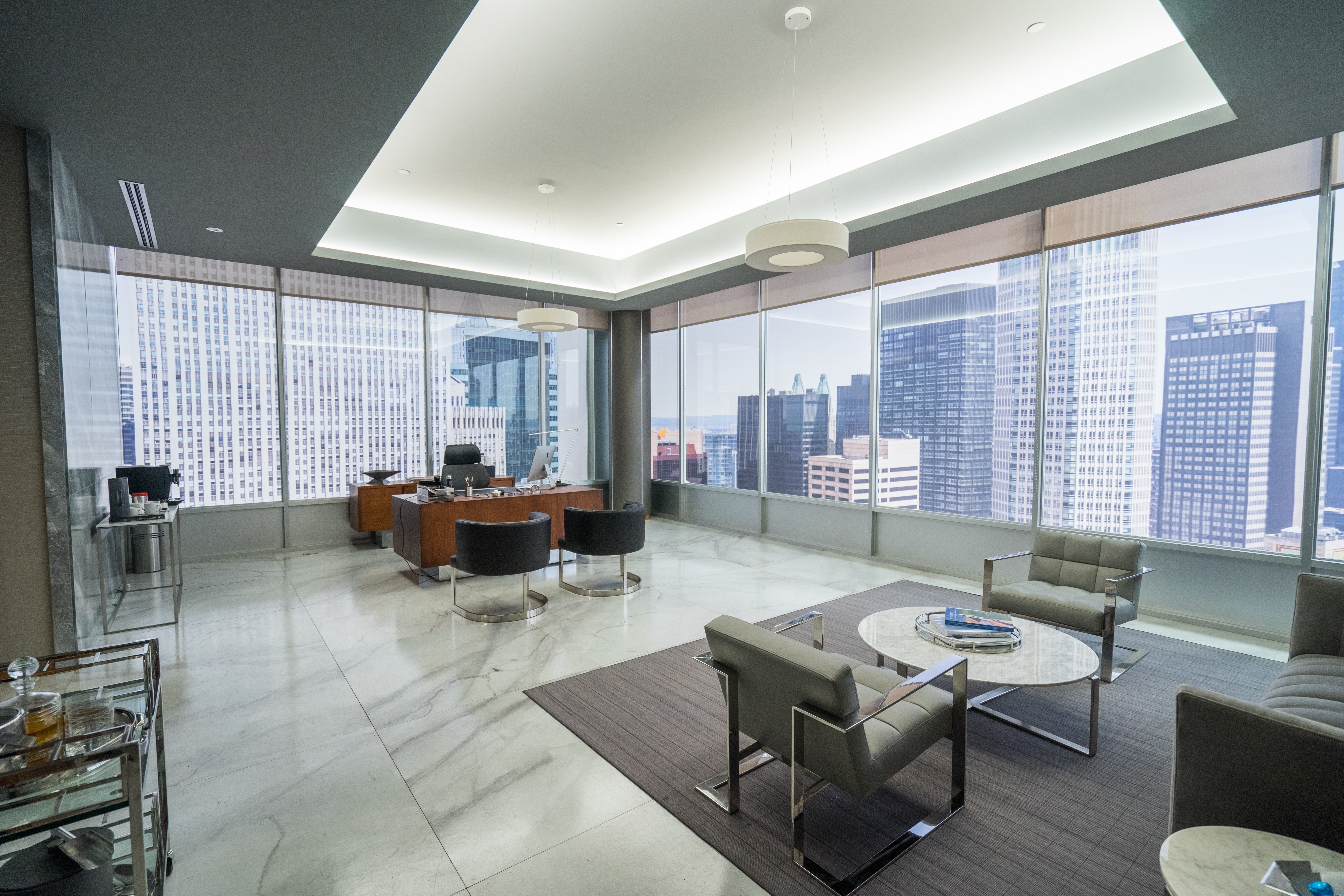 The panoramic Midtown view outside a corner office at Rand Corporation provided by Rosco SoftDrop.

According to Weeks, one of the most impressive SoftDrops was for the Rand Corporation in Iron Fist. Also a New York City skyline, this was meant to be a penthouse level suite in Midtown looking east. The final dimensions were 203 feet long by 34 feet tall, and the backdrop also turned a corner. “It’s not unusual to alter the photographed image for a SoftDrop by adding a building to fill a skyline, changing the colors of buildings, removing signage and making more windows lit for night scenes,” said Weeks. As an example, for the backdrop outside of Harold Meachum’s apartment, the Rosco Digital team made several edits, including the removal of the scaffolding that was on the top ten floors of the Woolworth building and the addition of some height to achieve the look the filmmakers wanted for the scene. 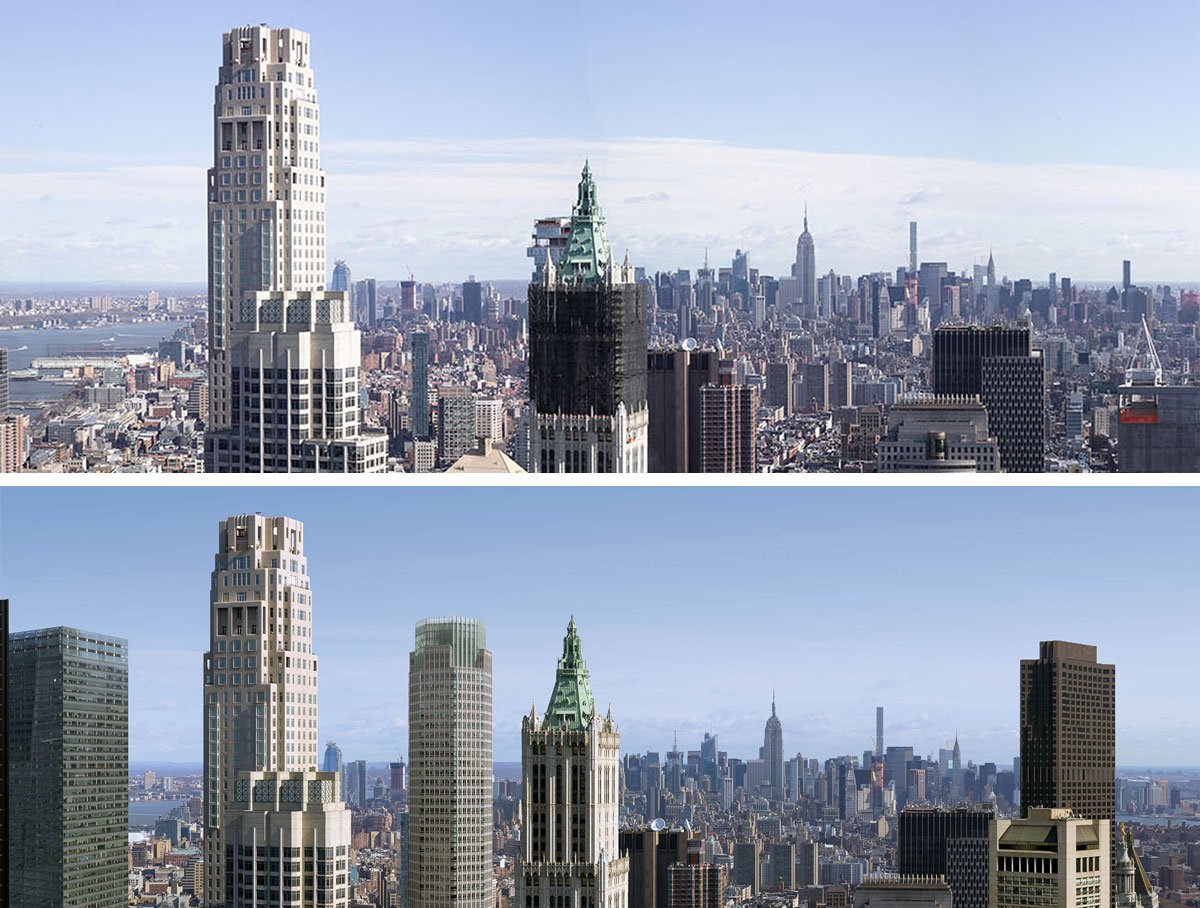 A portion of the original photo for the Meachum's Apartment backdrop (top - note the scaffolding) and the final, edited image file that was used to make the SoftDrop (bottom).

One of the major sets on Luke Cage was Pop’s Barbershop. The show’s creator wanted the barbershop set to be at street level to accommodate the ebb and flow of characters in the scene. But since this was shot on a soundstage, it was missing the cars and some of depth needed to paint a realistic-looking street level. “We solved this by finding a location in Harlem that stepped down from the sidewalk, and on set we cheated the SoftDrop a little higher and sunk the set below street level,” said Weeks. “We then created a stone wall that helped block the view of the street itself.” 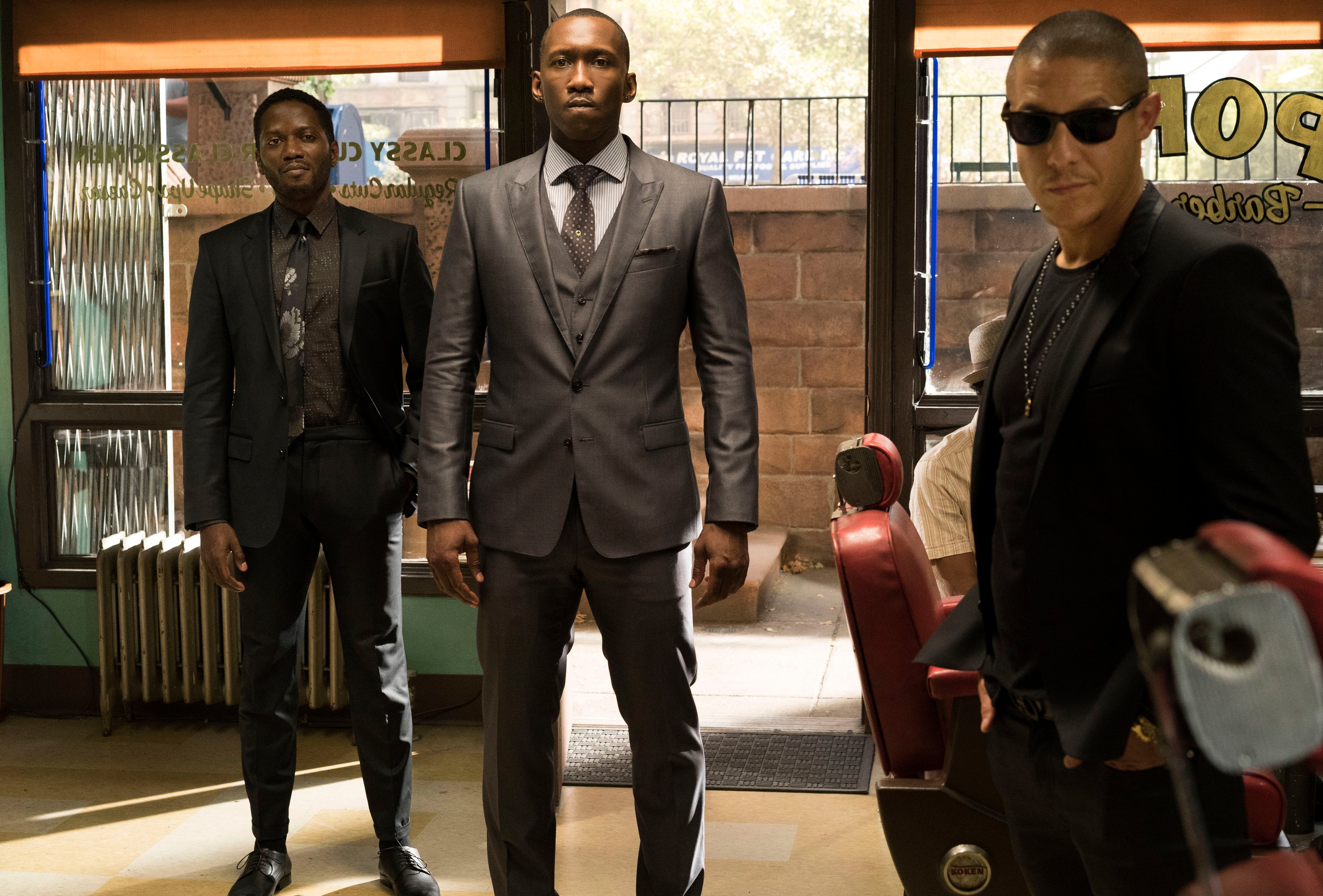 The Pop's Barbershop set for Luke Cage appears to be below street level due to the placement of the SoftDrop.

The team worked with Rosco to photograph the exterior location for the SoftDrop in Harlem, but the interior was shot on a soundstage about the size of a bowling alley. “It was so narrow that our drop had to curve around and go out of perspective,” noted Barton. “Phil from Rosco was doing all the calculations in front of me to make this work, and when we set it up, it was genius.” Weeks also mentioned what a fantastic job Manuel Billeter did “re-creating daytime lighting with the natural light and then reflections from passing cars” to add one more layer of realism to the drop. 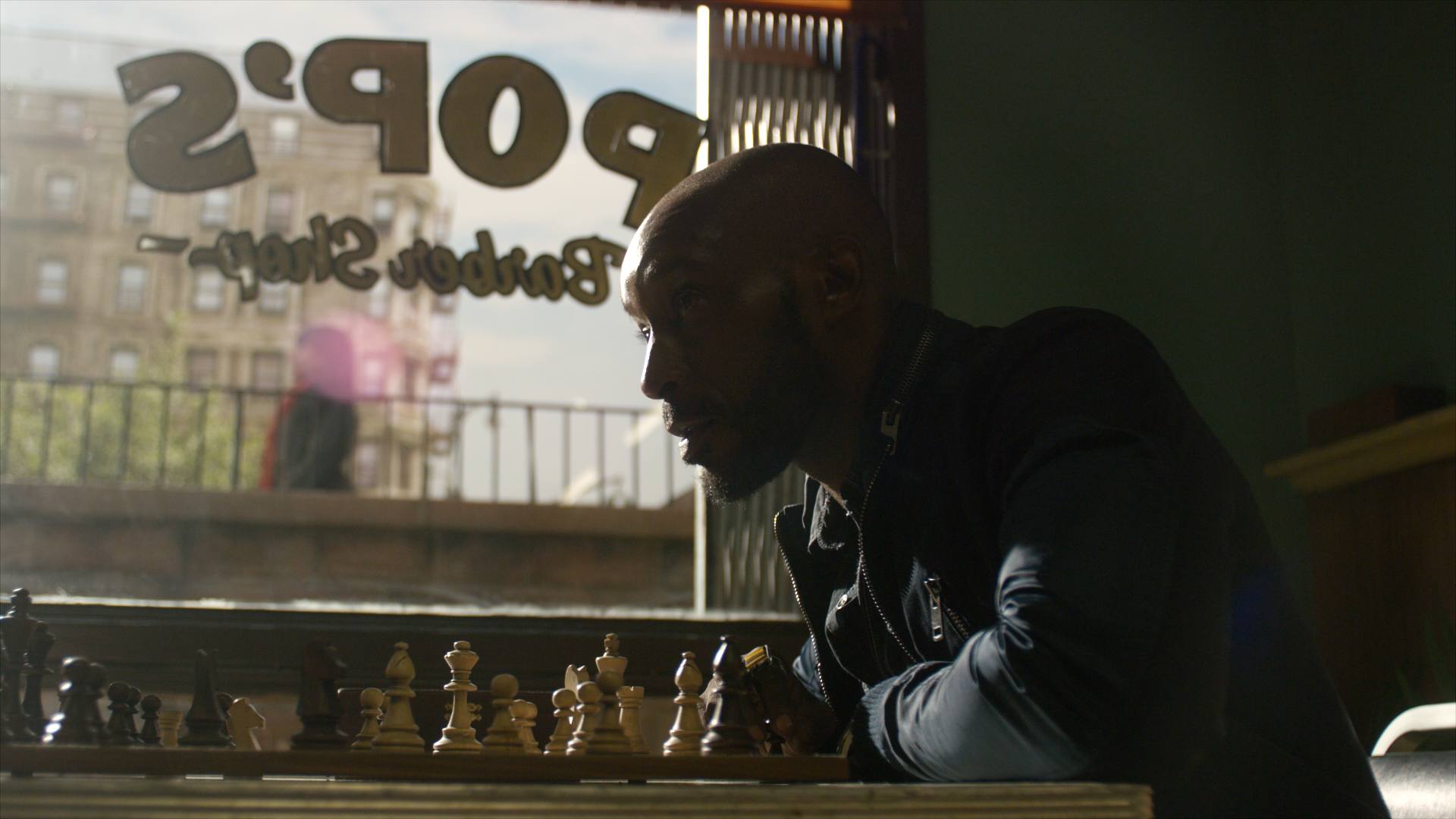 Rosco SoftDrop provides the view of Harlem outside of Pop's Barbershop

“Another advantage of the SoftDrops is they take up a lot less space to store between seasons than the vinyl drops,” said Weeks. “Once we establish a drop outside a set, that becomes the drop for that set from season to season.” While he didn’t reveal any details, Billeter plans to once again use SoftDrop on the upcoming season 3 of Jessica Jones.

“When you’re looking through the window of a set, and you see these backdrops, they have such a realistic quality to them - it’s just fantastic,” said Weeks. “The vinyl drops never achieve that, and they have more of manufactured look to them.” Barton agreed, “Without a doubt and as long as it makes sense, I’ll use SoftDrops on every production moving forward. They allow us to have a foreground and background and are not as harsh as what we get with vinyl backdrops.”

While we wait for the next installment of Jessica Jones, you can watch (or re-watch) seasons 1 and 2, Luke Cage seasons 1 and 2 and Iron Fist on Netflix now. Our thanks to Manuel Billeter, Loren Weeks and Toni Barton for recalling some of the production stories that built these Marvel-Netflix worlds. Visit Rosco’s Custom Backdrop page to learn more about the technology behind Rosco SoftDrop for your next production.