Halston is a limited series on Netflix that follows the legendary fashion designer (played by Ewan McGregor) as he leverages his name into a worldwide fashion empire. The setting of the series – New York City in the 1970s and 80s – required the production design team to imagine and construct sets that matched the time period and Halston’s lavish lifestyle. This included using a customized Rosco SoftDrop® for re-creating the 1980s Manhattan skyline that Halston would have seen outside his office window.

Taking on the challenge of re-creating Halston’s world was Production Designer Mark Ricker and Art Director Nithya Shrinivasan. The series features scenes at Studio 54 and Versailles Palace, as well as inside his lavish apartment – all of which were faithfully re-created by the production design team. The bulk of the scenes, however, take place inside Halston’s office. 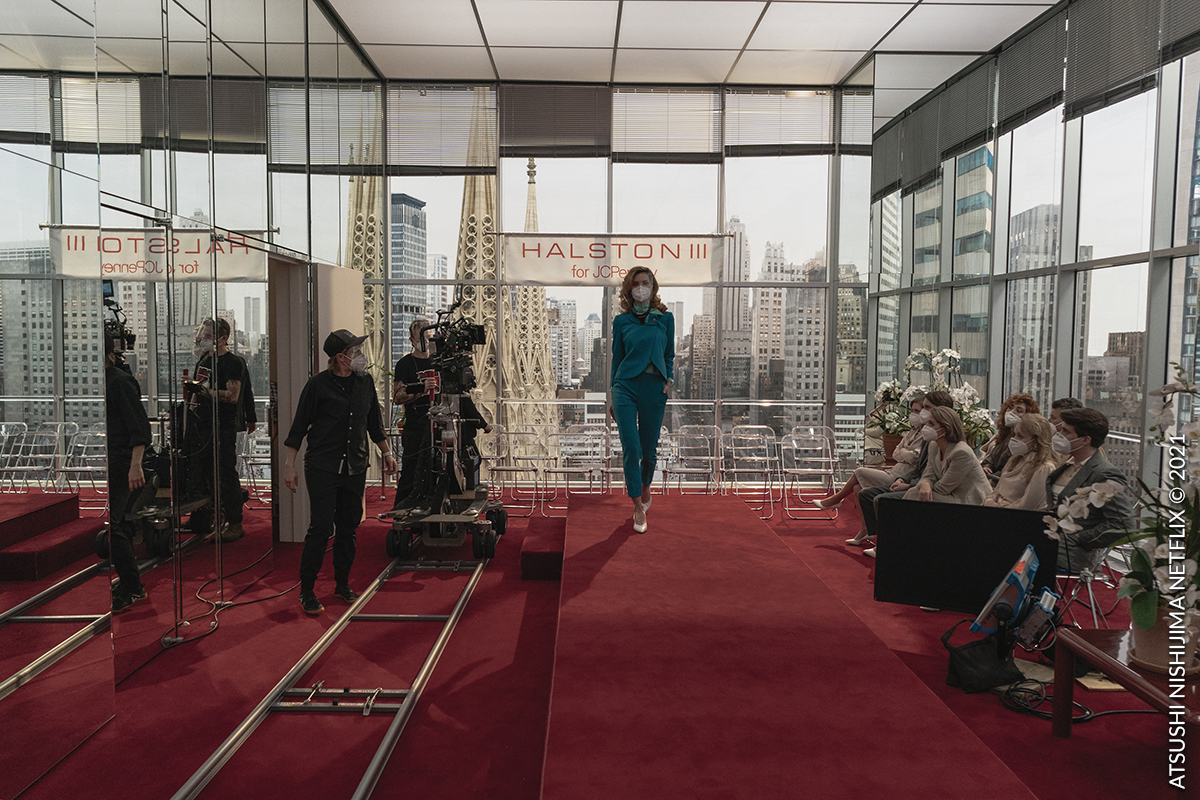 A Halstonette walks the runway inside the “Halston’s Office” set.

At the height of his career, Halston’s headquarters were located on the 21st floor of Olympic Tower, located at 641 Fifth Avenue in Midtown Manhattan. Much of his life was spent designing his clothing and his brand inside this opulent office space. He even hosted fashion shows there with his “Halstonettes”! Because so much of Halston’s life was spent inside that space, Ricker and Shrinivasan needed to re-create the office with its bright red carpets and huge mirrors. This also meant creating the office's floor-to-ceiling windows and their stunning panoramic views of Midtown Manhattan for their set. 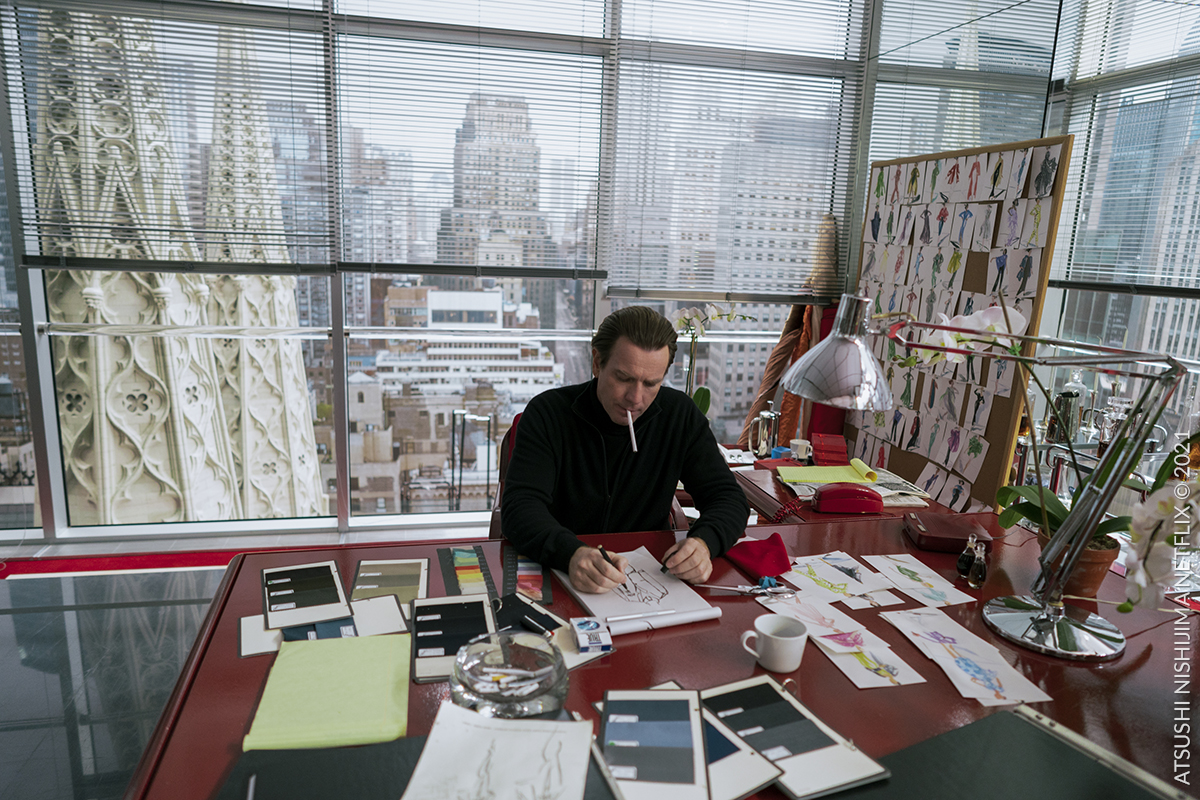 Ewan McGregor as Halston working at his desk inside his “Midtown Manhattan office space.”

The “Halston’s Office” set was constructed in painstaking detail inside Broadway Stages’ Stage 10 in Brooklyn. Ricker described how, with all of those large windows, “there was a lot of city to see in the background." He also noted that “there was no hiding behind curtains or windowsills." Ricker and his team knew early on that Manhattan – in all her glory – was an integral part of Halston’s world and had to be created outside the windows of that set. 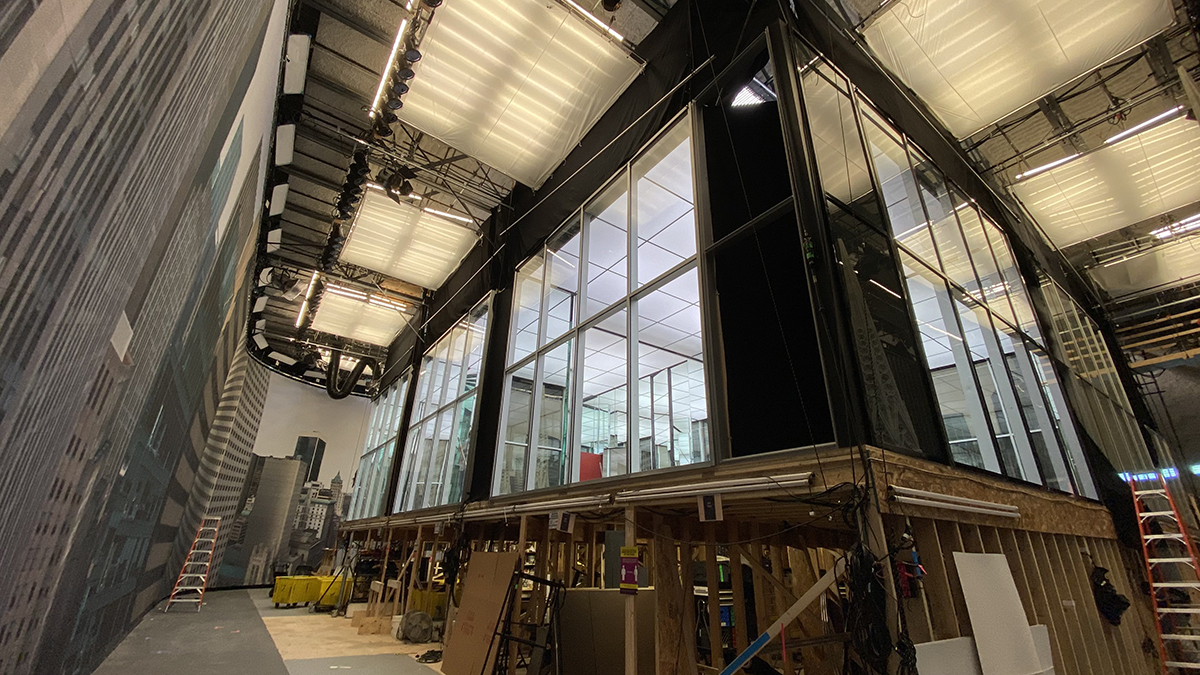 A behind-the-scenes shot of the Halston set with its Manhattan skyline SoftDrop outside the windows.

In order to create the Manhattan cityscape, Ricker and Shrinivasan worked with Rosco to create a 27’6”H x 200’W Day/Night SoftDrop. The process began with a present-day visit to the 21st floor of Olympic Tower. Shrinivasan recalled being “immersed in these stunning views.” She also realized that their only option for creating the background imagery was to photograph the view outside those specific windows. 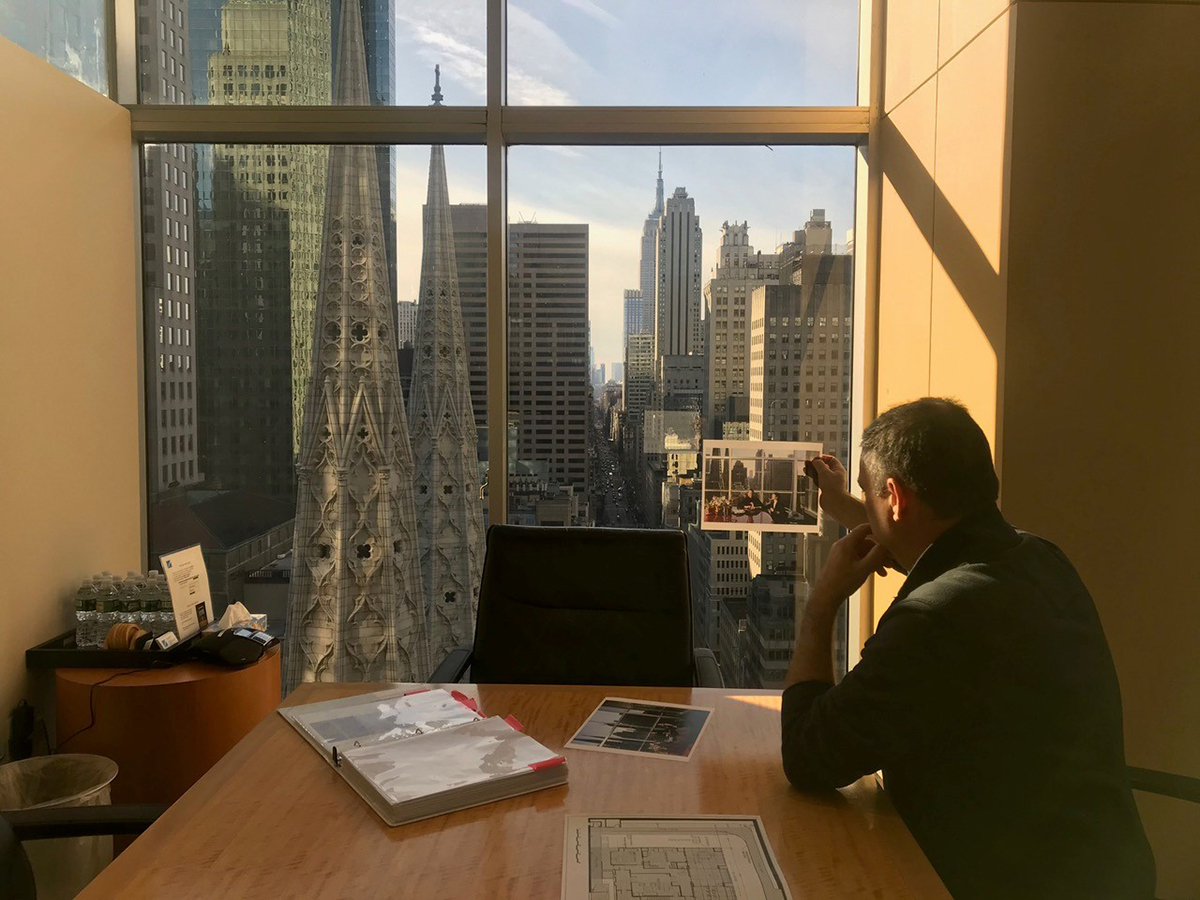 Rosco’s Phil Greenstreet looks out the same Olympic Tower window as the one in the photograph of Halston that he's examining. Click the image to get a closer look at the research photo.

Both Ricker and Shrinivasan had worked with Rosco’s Phil Greenstreet on previous projects. They knew that his 30+ years of experience shooting and creating backdrops for feature films and television shows would be needed for Halston. Phil arrived on location and captured all of the shots necessary to create both the day side and the night side of the SoftDrop. Phil noted that “one of the most important things about shooting background photography – especially from a location so high up – is making sure that the horizon line is accurate and consistent.” He and Shrinivasan worked together during the shoot to make sure the horizon was properly aligned and captured in each shot.

When you hire Rosco to make your backdrop, you don’t just get Phil – you get the entire Rosco Digital Imaging team. They worked with the Halston filmmakers to make period adjustments to the photos that Phil captured. The RDI team removed a number of modern buildings from the view, including Trump Tower. Then they added other structures, like the Pan Am Building and the distant Twin Towers, back in. The RDI team also worked with Cinematographer William Rexer to add a depth of field filter to the image that subtly blurred some of the buildings in the background. 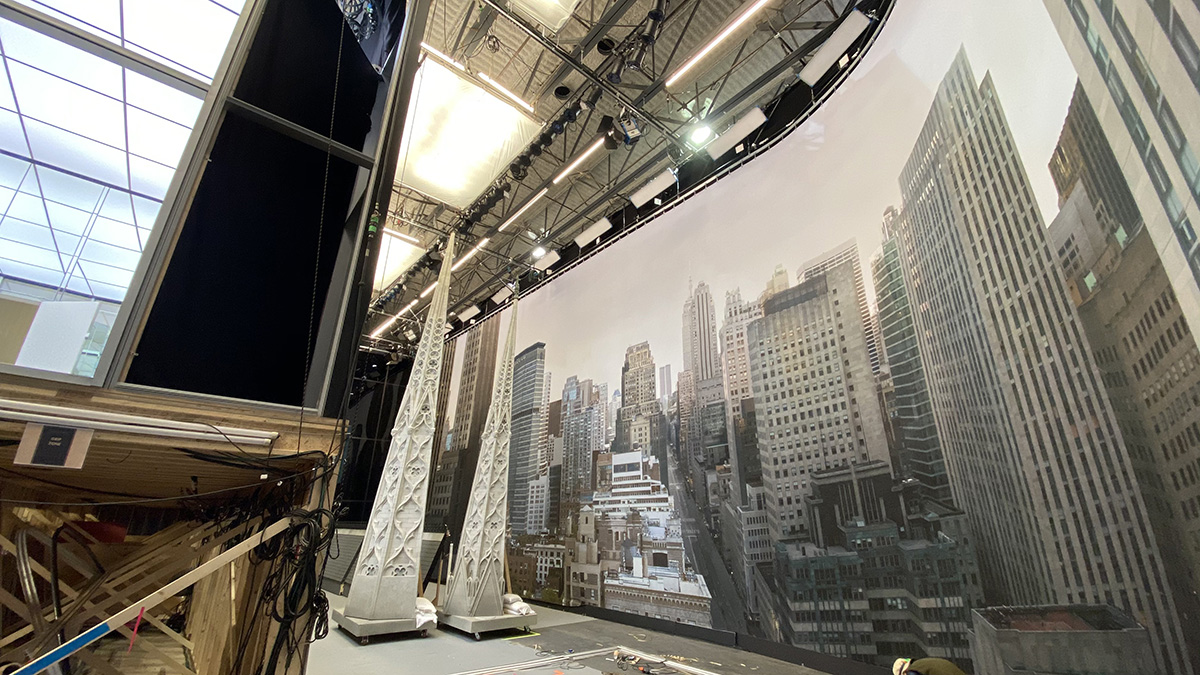 A behind-the-scenes look at how the miniature cathedral spires played in front of the backdrop.

One big edit the RDI team needed to make on the modern-day photo was the removal of the Saint Patrick’s Cathedral spires that were right outside of the window. “What do you mean we erased the spires?” asked the producers of the show. “Wasn’t that the whole point of getting that specific photo?” The problem was that, if the spires stayed in a fixed position outside the window, they would spoil the illusion. Because of their close proximity to the building, the juxtaposition of the spires needed to shift as the action moved through the set. That shift couldn't happen if the spires were printed on the backdrop, so the RDI team removed them. The filmmakers built miniatures of the spires instead and strategically placed them outside of the window.

Watch this animation to see some of the edits that were made to the original photograph.

Perfect From Any Angle

The most impressive feat of this SoftDrop is how realistic it looks – no matter what angle the filmmakers were shooting. It was engineered to wrap around the set precisely and provide the filmmakers with a 270° viewing angle out the windows. This enabled the filmmakers to shoot practically anywhere they needed and still have perfect Manhattan views in the background. From one angle, they had a fantastic view all the way down Fifth Ave. They were even able to shoot “exterior” views from outside the set. Because the office set was built on a platform, they could shoot up from the stage floor at McGregor gazing out the window with Manhattan all around him. 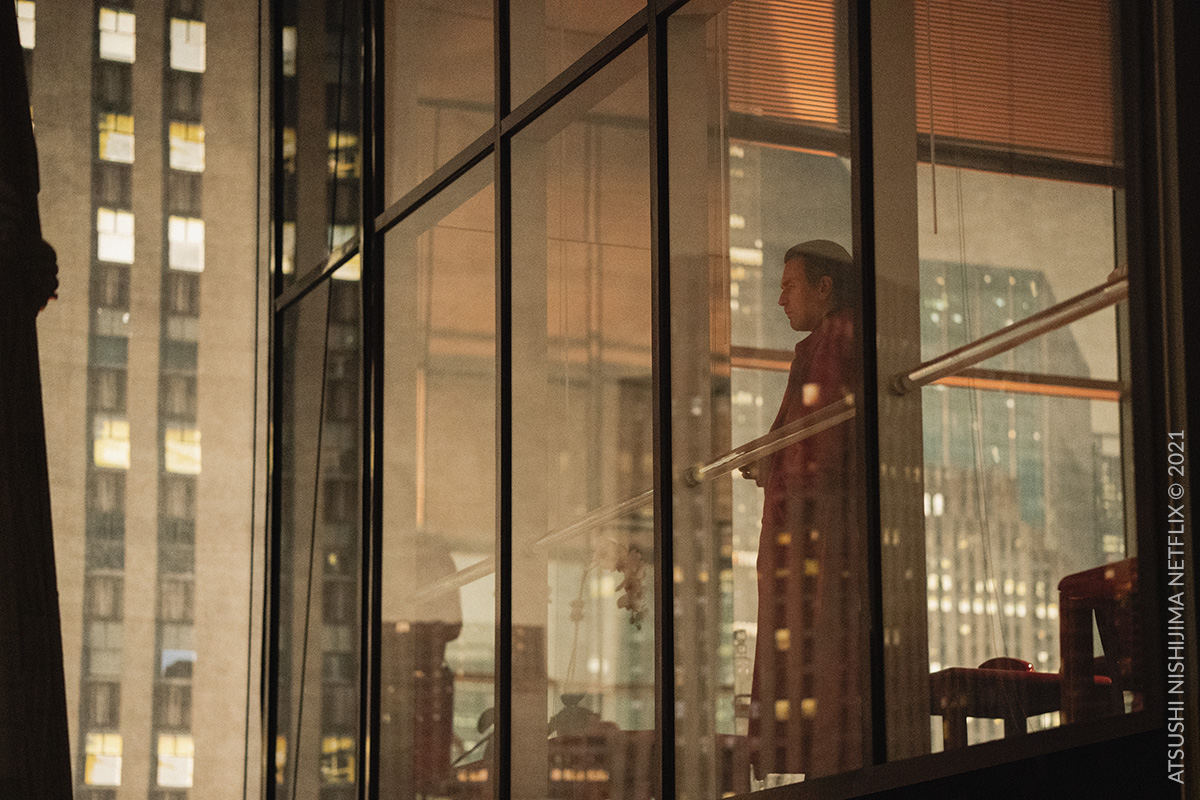 The Rosco SoftDrop creates Manhattan all around Halston in this shot – including in the window
reflections.

Perhaps the biggest compliment Ricker and Shrinivasan received about the SoftDrop was that some filmmakers asked if the background had been created using a green screen. Ricker admitted they had considered that approach briefly. He knew, however, that would become next to impossible with all of the mirrors on set. Ricker also noted that one of his favorite aspects of shooting with the physical drop was seeing the reflection of the nighttime city in the mirrors and other windows – which wouldn’t be possible with a green screen. A collection of screenshots from the Halston trailer showcasing the 1980s Manhattan SoftDrop in the background.

If you’d like to see how well this backdrop plays on screen, watch Halston on Netflix. Want to learn more about the solution that Nithya Shrinivasan and Mark Ricker used to re-create 1980s Manhattan outside of Halston’s office? Please explore the SoftDrop product page on the Rosco website.  It’s also worth noting that the Halston SoftDrop is now available as a Rosco Rental Backdrop. We are here to help. If you have questions, please contact us for more information.