The dystopian, totalitarian society that you know as Gilead lays the framework for the hit Hulu series, now in its third season, which was adapted from Margaret Atwood’s novel The Handmaid’s Tale by Writer and Executive Producer Bruce Miller. This world is very much meant to mirror our own while also exaggerating distortions of a patriarchal, religious hierarchy that now rules society. In the third season, we see more of Commander Lawrence, a character introduced in Season 2 and played by Bradley Whitford. Several scenes are shot inside Commander Lawrence’s estate, and the filmmakers relied on Rosco SoftDrop to create the background setting for these scenes.

Produced by MGM Television, the Hulu original series The Handmaid’s Tale is filmed both on location and on sound stages in Toronto. While Seasons 1 and 2 relied upon the same standing set and resources, Season 3 offered a chance for the production design team to create a new set for Commander Lawrence’s home. The Lawrence estate is actually a heritage home in the neighborhood of St. George, Ontario, and while the backyard exteriors are shot on location, the interiors are shot inside a sound stage. 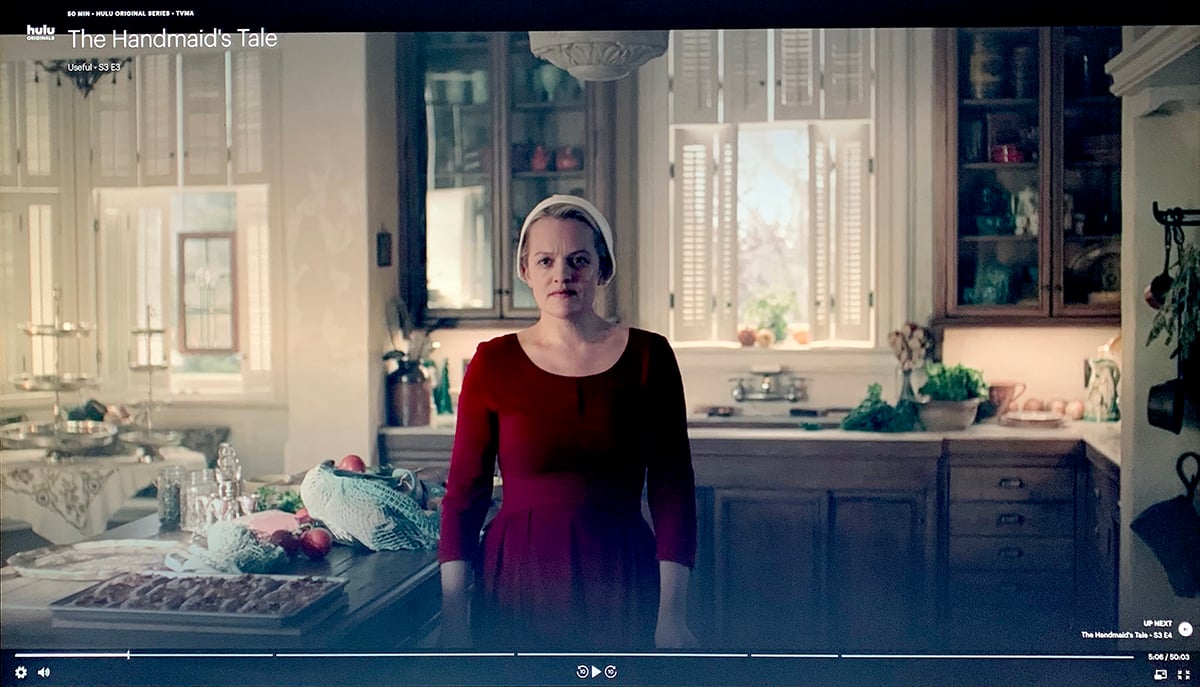 A Rosco SoftDrop provides the background for this screen shot of Elisabeth Moss as June Osborne inside the Lawrence household during The Handmaid’s Tale – Season Three.

When it came time to choose the backdrop for the set, Director of Photography Colin Watkinson, who had worked with a Rosco SoftDrop on a previous job, recommended it to the production design team. “The SoftDrop is something that’s made so well, and I hadn’t seen that before,” said Watkinson. “Its quality materials absorb the light instead of reflecting it, and that’s what a backdrop is meant to be. I also really liked how you could transition from day to night with the SoftDrop’s clever system.” 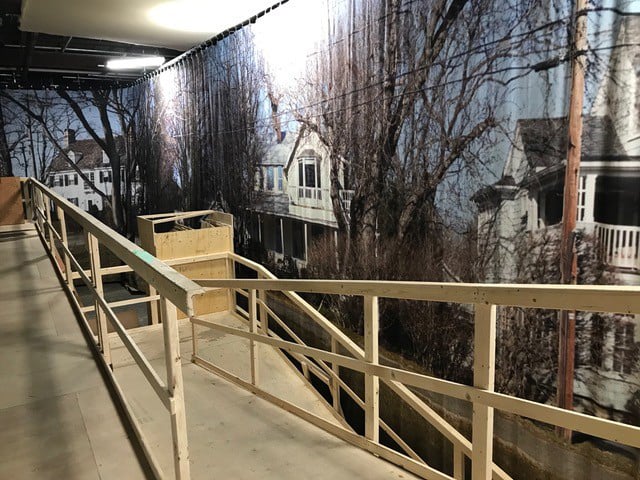 A behind the scenes photo of the SoftDrop getting hung behind the set for Commander Lawrence’s House.

Art Director Martha Sparrow oversaw the creation of the Rosco SoftDrop outside the Commander Lawrence set. “We had previously used vinyl and some locally-produced material backdrops, but the vinyl reflects a sheen, and you can’t get a seamless material drop for the size that we needed,” noted Sparrow. “Because this was a new set, we were able to justify putting the resources toward a drop that Colin would be happy with.”

Day/Night Backdrop #R0291 was the original image file Martha chose from the Rosco Image Bank to begin creating the background imagery for the Lawrence House set.

Sparrow began the process by choosing an image from Rosco’s extensive Image Bank of existing backdrop artwork. The aesthetic she sought out is best described as “affluent eastern North American architecture,” and the image she chose featured high-end white houses that were set far apart from one another, which was originally photographed in an upscale, New England residential neighborhood.

The final files used to create the Day/Night SoftDrop for the Lawrence House set – after digital manipulation that included mirroring, shadow removal and perspective correction on the houses that were added into the image.

From there, the team at Rosco Digital Imaging worked with Sparrow and her team to manipulate the image in order to create a longer drop. “We needed to source a continuous drop that would be large enough to stage scenes for the camera to flow between rooms of the house,” said Sparrow. “We actually ended up working with Rosco to mirror the street view image that we chose in order to expand it for a large enough drop.” The filmmakers ended up installing an 18’6” x 150’ (5.6M x 45.7M) SoftDrop on their set to provide background imagery that A.) didn’t have the sheen other vinyl backdrops had, and B.) didn’t have any seams that locally printed backdrops would have had. 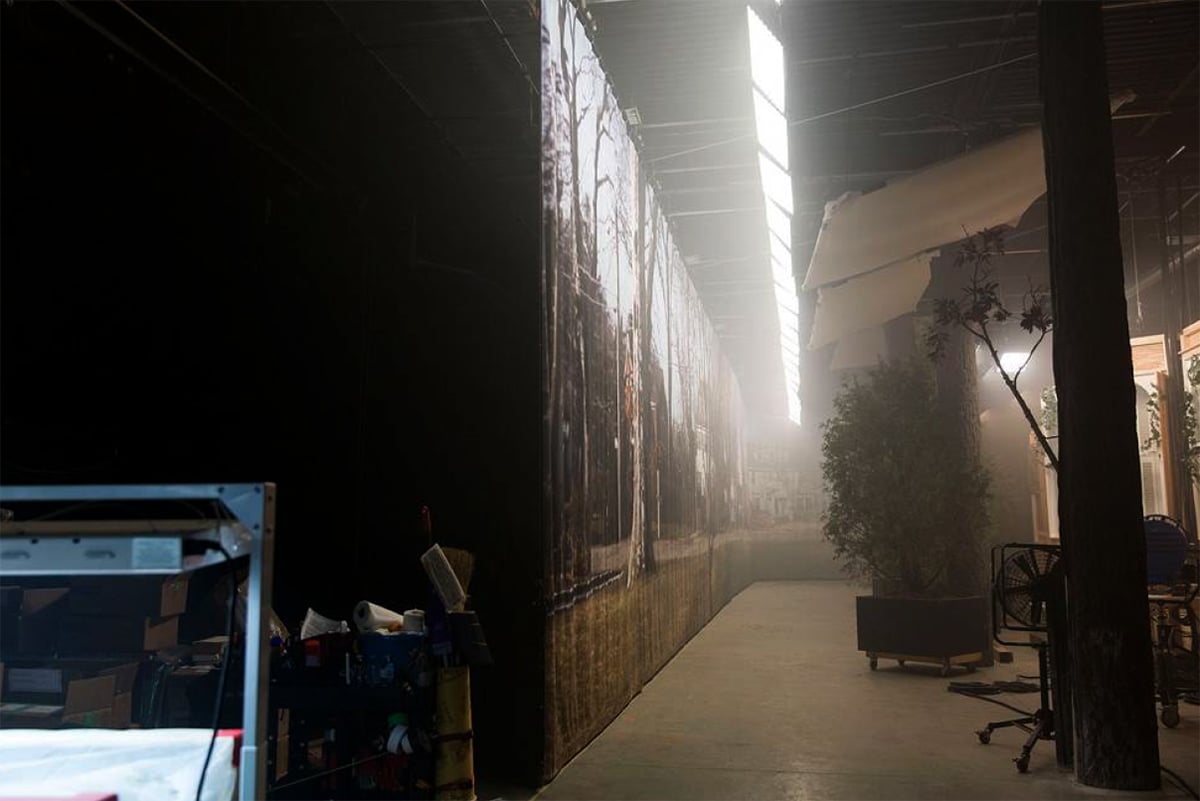 A behind the scenes look of the front of the SoftDrop with foliage wheeled in-between the window and the drop.

“Since we prepped in July and shot from September through April, one of the most important elements in sourcing a drop was being able to dictate the proper season for the image,” noted Sparrow. “We get the most flexibility by choosing an image that includes leafless trees and no snow because we can always bring in trees with leaves and/or bare branches to place in front of the drop to match the season we’re shooting.”

See the results of everyone’s efforts –  season three of The Handmaid’s Tale is available to stream now on Hulu. If you’d like to learn more about the products the filmmakers used to create the realistic background imagery seen in the show, visit the Custom Backdrop product page on the Rosco website