Ed Wu is an American cinematographer who has worked on a wide range of feature films, short films, documentaries, music videos, and commercials. He recently shot the Netflix thriller End of the Road directed by Millicent Shelton. After witnessing a murder, Brenda (played by Queen Latifah) and her family try to escape a mysterious killer as they travel alone through the New Mexico desert. Ed told us how he and his crew used numerous rolls of #R4990 CalColor 90 Lavender to create a harsh desert landscape for their nighttime exteriors. “We used so much CalColor 90 Lavender that Rosco had to make more just for us!” Below, Ed explains why he chose this specific color to create the film’s bold color aesthetic.

When I think of my favorite thriller films, they mostly feature gritty, bleak and muted color palettes. But with End of the Road, Millicent and I questioned why this needed to be that way. Why couldn’t a thriller movie have a bright and bold color aesthetic? Additionally, we hadn’t seen the desert portrayed in movies in a vibrant way either. With this in mind, Millicent gave me the freedom to push the limits of colorful lighting. Whenever I would pitch a lighting idea that I thought would be pushing my own comfort zone, she would fully embrace it. 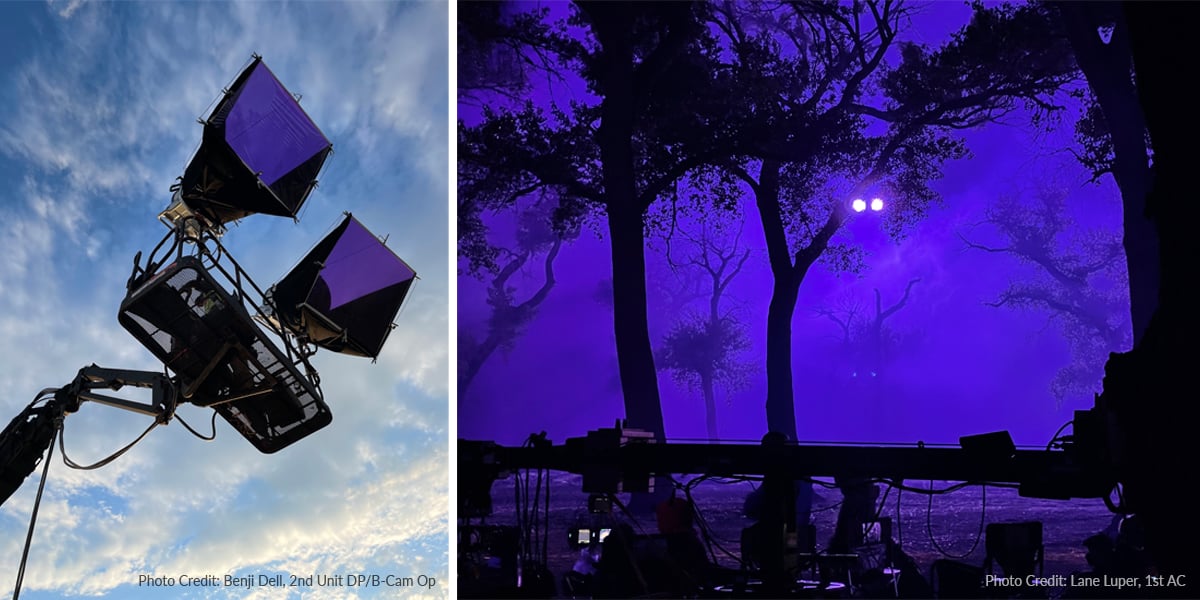 In addition to a bold color aesthetic, we also wanted to externalize how much struggle and pain that this family has to go through by making the sun and desert landscape a constant presence in the film. The family tries and tries to escape the harshness of the desert heat – but it is inescapable. Not only did I use a hard quality of light and overexposed light on our characters to emphasize this, but I also pushed color in the night photography to emphasize it further. For example, we typically see moonlight, especially in current trends, as a cyan or blue color. I love this aesthetic but, for this film in particular, I wanted the night scenes to get across that, no matter how hard the family tries, they can never escape the inevitable heat of the devastating desert. Using #R4990 CalColor 90 Lavender was a great way to still have the eye recognize the coolness of moonlight, but also add in that “devastating heat” with the red hue that naturally exists in purple.

I chose CalColor 90 Lavender specifically after doing extensive testing. My first step was to look through my Rosco swatchbook to see which purple hues resonated with me. I knew I wanted a deep rich purple color that was highly saturated. I ended up choosing the #R4930 CalColor 30 Lavender, #R4960 CalColor 60 Lavender, and #R4990 CalColor 90 Lavender gels to test on both tungsten and daylight balanced lights. I also tested some additional colors via RGB LED lights against the CalColor gels. I knew the colors would not exactly match the physical gel equivalent, but I believed it would be a close enough approximation for the time and money that we had. We then tested different color temperatures on the camera with each variation of colors and units. 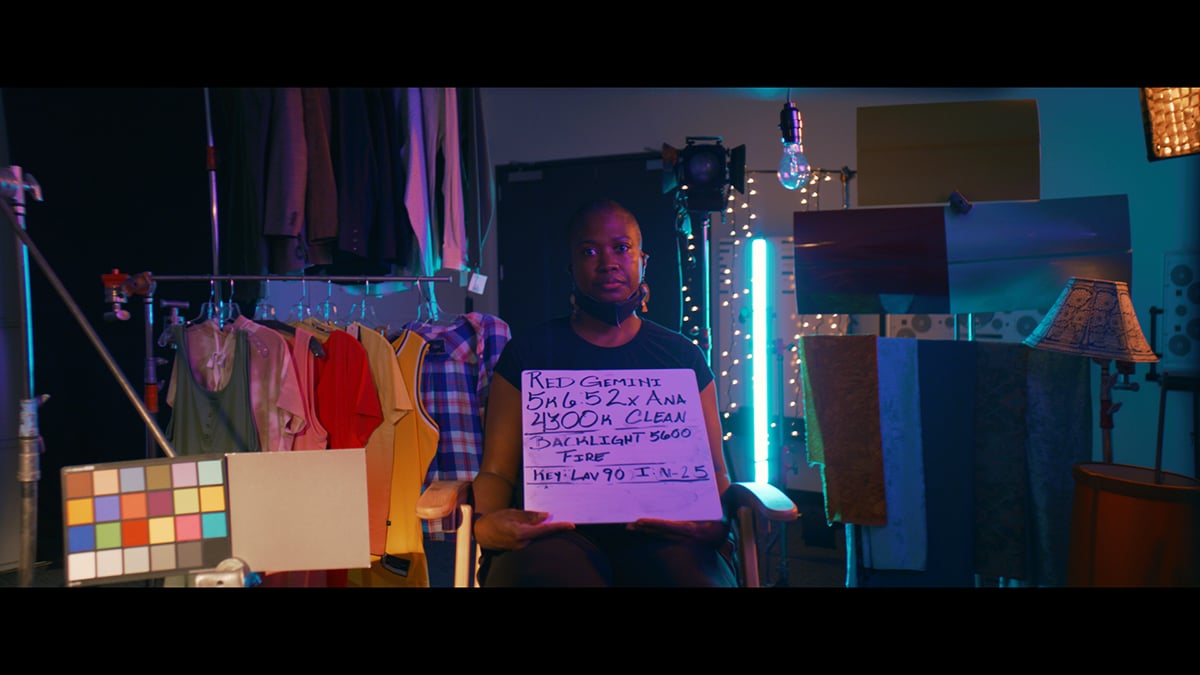 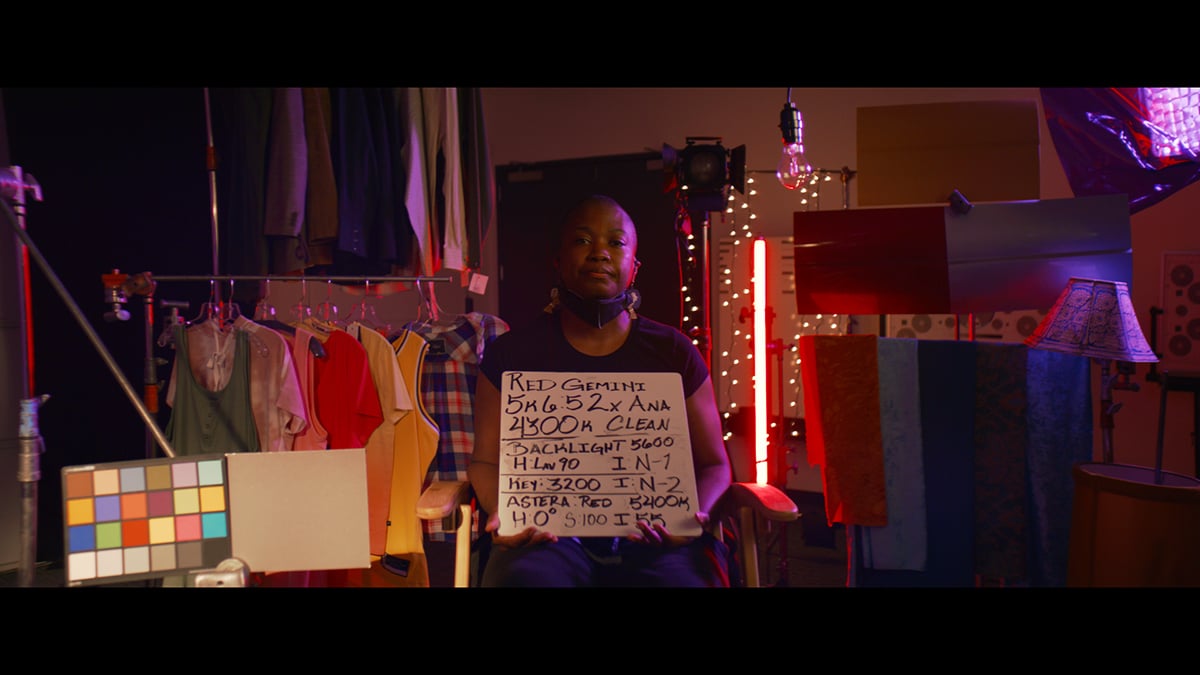 I ultimately decided to use physical gels instead of RGB LED units because we had a lot of large vast night exterior locations in the desert and forest. In order to light these sprawling wide shots for the scenes, I felt the need to use 18k and 20k HMIs because I wanted that hard quality, the far throw, and the spread of the beam. Plus, we needed the extra punch to compensate for the light loss of the gel. The LEDs that I used varied from brand to brand and I dealt with different shades of purple with each manufacturer’s interpretation of #R4990 CalColor 90 Lavender. The physical gel gave me the peace of mind to know that the color coming out of the light would be the color that I had envisioned. Although LEDs are extremely close to being able to replicate most gel colors, I found that the deepness and richness of the purple that I chose just wasn’t possible with current LED technology. 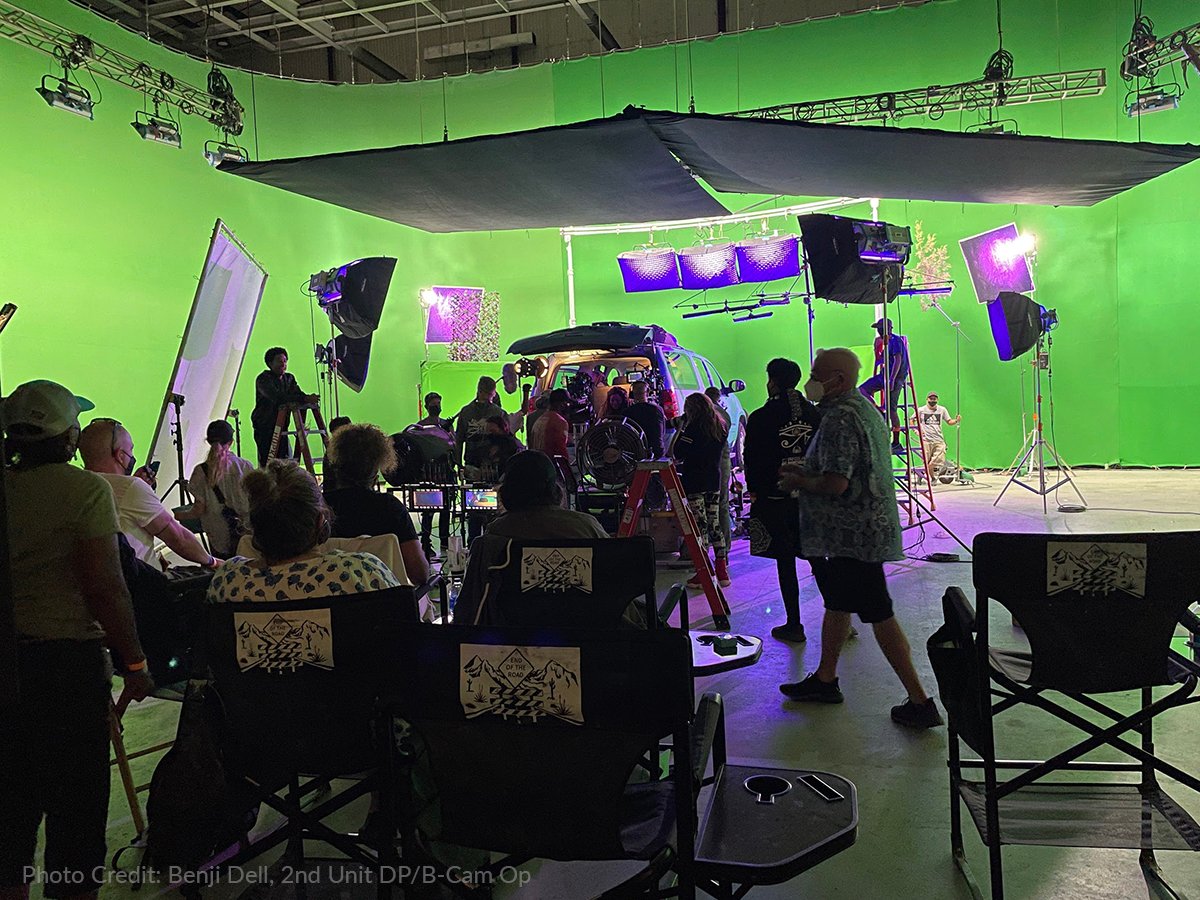 Some of my favorite nighttime exterior shots were the skinhead enclave scenes. The location that we found was an old epsom salt mine that was completely encompassed in white. It was excruciatingly hot to work in during the daytime because the sunlight bounced around everywhere. But, when night came, I imagined the location as a large canvas that we could use to paint an expansive swath of colors. 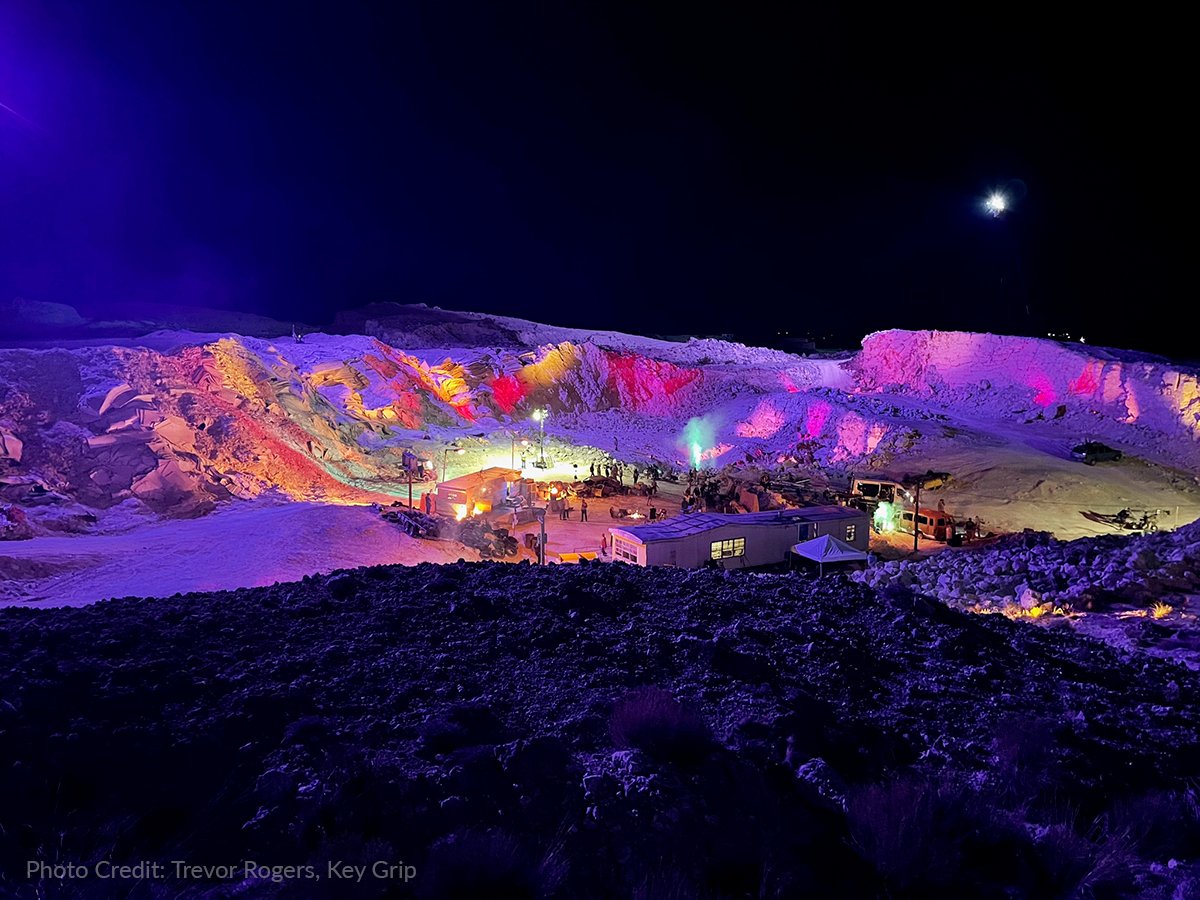 A combination of Rosco colors creates a vivid background for the skinhead enclave scenes.

I thought of various practical sources that could be believable for the story, while fitting into the warm color palette that I was imagining. This led to using e-colour+ #E106 Primary Red as ‘road flares’ and Cinegel #R3442 1/2 CTS as ‘work lights.’ These colors were peppered around the salt mine to create a collage of colors that mixed with the CalColor 90 Lavender in the background. I chose to use gels instead of LEDs in this location because Source 4 ellipsoidals were a cheap, but effective way to line the entire salt mine with color. This technique provided me 360 degrees of flexibility to point the camera in any direction I wanted without a huge lighting change. 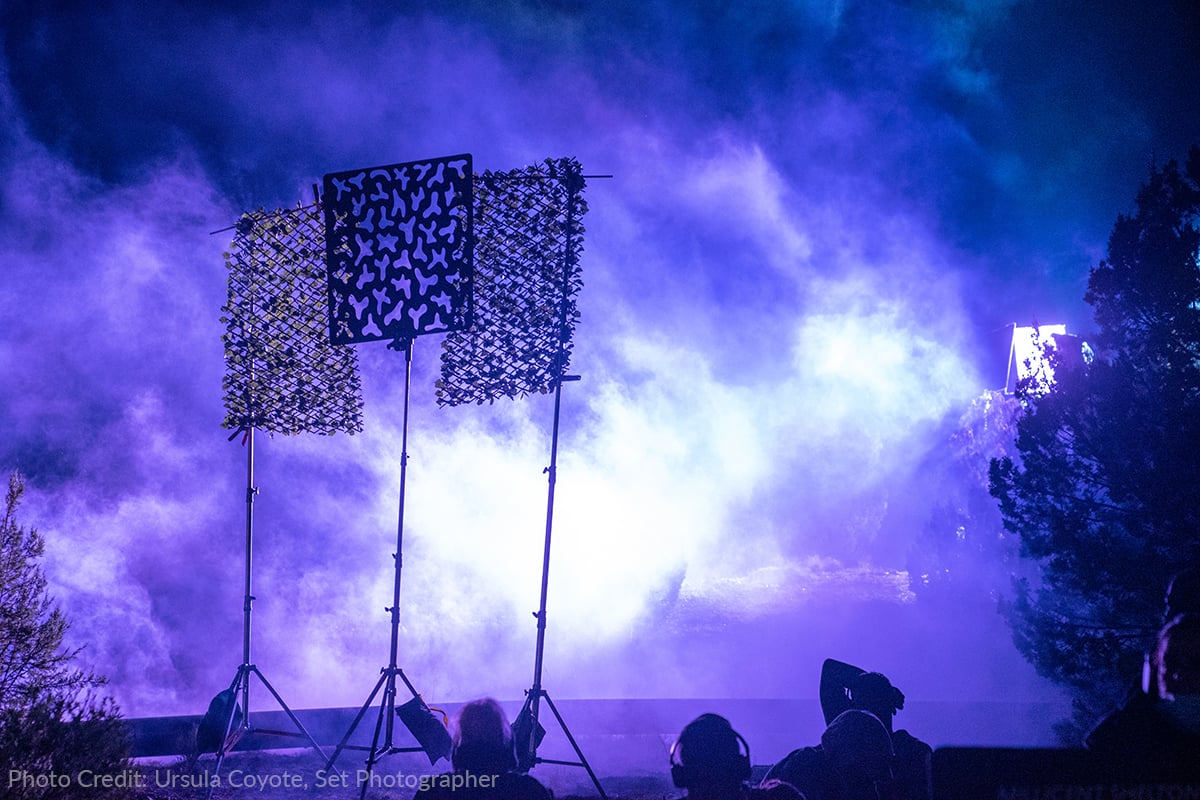 I would like to thank my crew who worked really hard on this shoot. My gaffer, Lamarr Gray, always gave me his 110% and was trusting about the choice to use such a dense gel that cut so much light. My key grip, Trevor Rogers, was always ready to rig up our big setups and skin up all of the different gels we were using. The two of them and their crews were vital to achieving the bold colorful look we were going for on this project.