The Colony is an award-winning, post-apocalyptic, science fiction thriller directed and written by Tim Fehlbaum. The film takes place on Earth after a global catastrophe has wiped out nearly all of humanity. Much of the film was shot in the German Tidelands. This wetland area features several small mudflats that created the barren, post-apocalyptic landscape for the film. The mudflats, however, only appear during low tide, which made it impractical to shoot the entire film on location. The filmmakers had to figure out how to re-create this unique landscape on a sound stage. Instead of using green screen or expensive LED walls, the filmmakers chose practical background visuals – including a Custom Rosco SoftDrop – to create the stunningly bleak world of The Colony.

The relationship between the wetlands and the sky made the German Tidelands the perfect setting for this particular film. Re-creating those wetlands inside a sound stage, however, was a massive undertaking. Tons of sand and water were trucked into Bavaria Studios. Plus, the set was flooded and drained every night to wash away the prior day’s footprints and reset the mudflats to smooth. Luckily, re-creating the sky was a little easier. The filmmakers surrounded their set with a 29.5'H x 295'L (9m x 90m) Backlit Custom SoftDrop to create 360 degrees of sky around their mudflats.

A panoramic view of the set for The Colony.

Markus Förderer, ASC, BVK was the cinematographer on the film. When asked why they chose practical background visuals instead of green screen, Förderer replied: “Shooting the story in ‘an authentic way’ was very important to Director Tim Fehlbaum. Shooting green screen would have led to a different aesthetic.” Förderer knew that capturing the reflection of the sky in the wet sand was key to making the stage scenes match the location shots. Having the practical sky in place gave the filmmakers freedom to explore as they shot. “That’s the major problem with green screen,” said Förderer. “You capture something assuming the final VFX composite will look great. But if it is not shot in the right perspective or with the right lighting, it will always look and feel artificial.”

The SoftDrop enabled the filmmakers to use haze and other practical background visuals in their scenes.

Förderer also shared how SoftDrop allowed them to shoot without the constraints that typically come with green screen. “Shooting on a green screen would have also restricted the production to a very limited number of shots,” reported Förderer. With SoftDrop, the filmmakers were able to capture everything in-camera and they could see immediately if the lighting looked real or if anything looked amiss. “I was able to experiment with various elements – different levels of haze, different focal lengths, etc. – and know right away if they worked. The SoftDrop enabled us to see immediately what kind of shots worked well in this stage setting, which allowed us to adjust accordingly if we had to. Despite our limited budget, the SoftDrop enabled us to capture very dynamic shots that would have been too costly to create with VFX.” 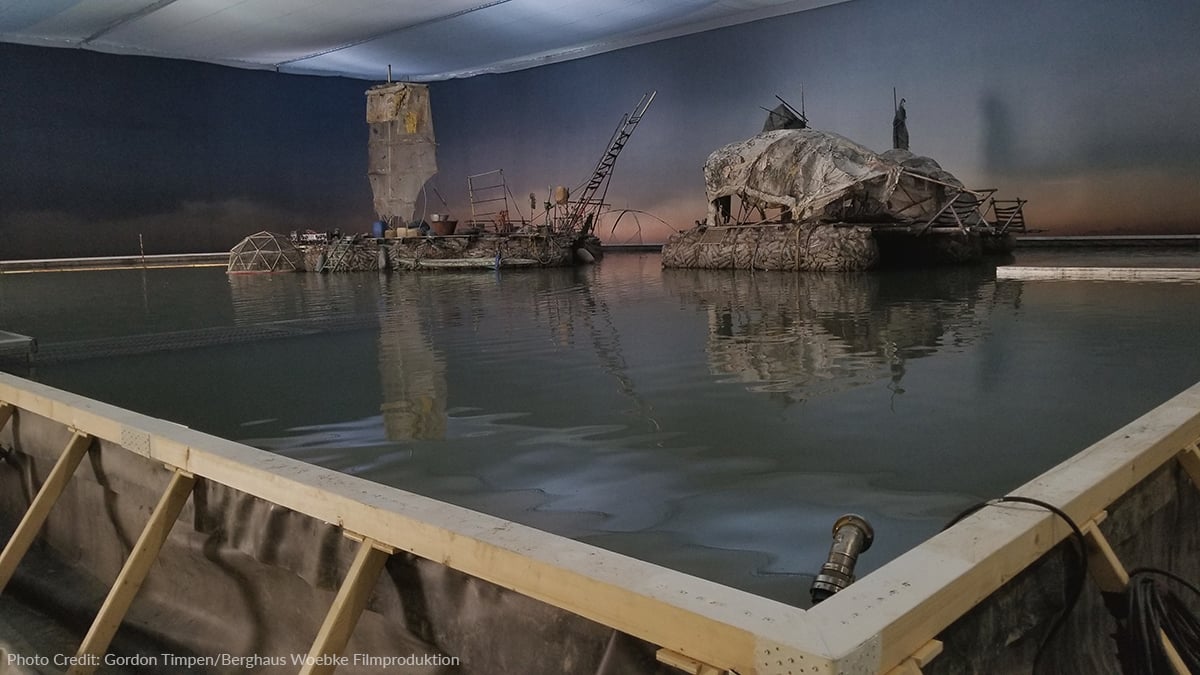 Because so many different scenes were shot in front of the same backing, the filmmakers had to figure out a way to vary the sky. The required SoftDrop was so huge that a second print would have been impossible, and the turnaround time would have been too long. Plus, it would have been impractical for the crew to physically swap out backdrops. Markus – relying on his prior experience with Rosco Day/Night SoftDrops – worked with Production Designer Julian Wagner to create two different sky effects. One version was printed on the front of the drop and the other version on the back. This enabled the filmmakers to create a variety of different sky effects by simply changing the ratio of front and rear light on the SoftDrop.

The final image file used to print the SoftDrop: top = the front side - bottom = the back side

In order to authentically re-create the reflection of the sky in the wet sand, the set lighting crew also had to re-create the lighting of the sky itself. During pre-production, Förderer collaborated with the
production’s art department to build a small model of the set. The model had scaled set pieces and figurines – but, most importantly, it had a glossy bottom surface and a sky background. This allowed Markus to test out different lighting techniques. 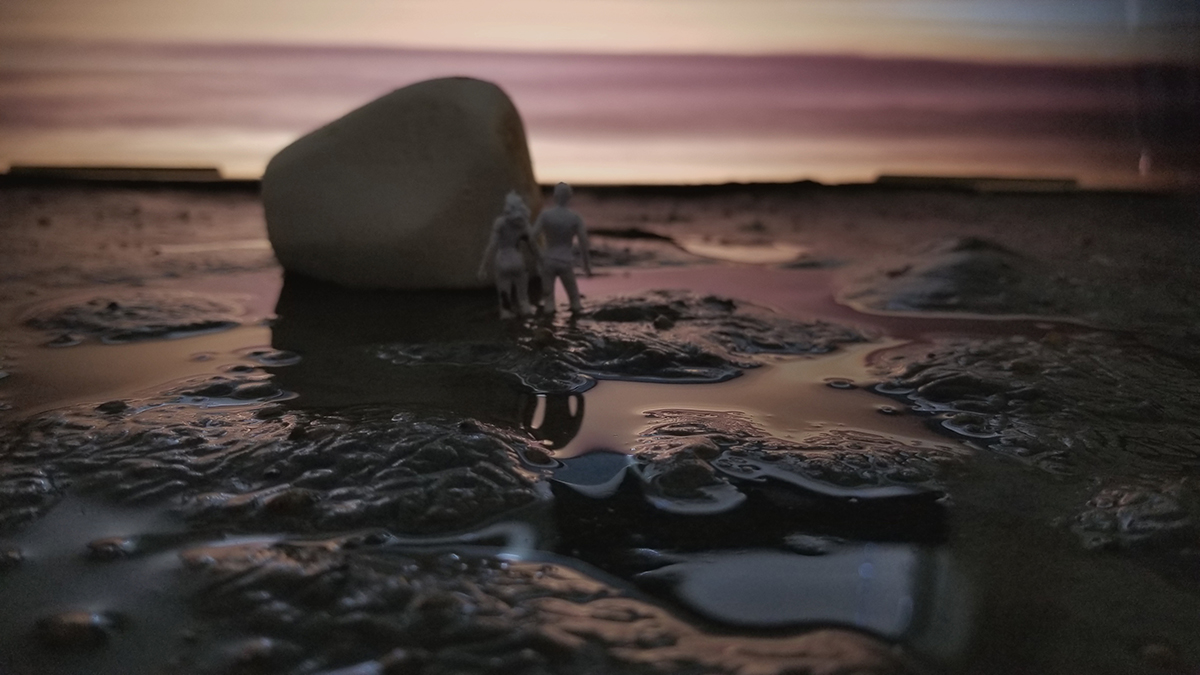 Markus tested how to light his practical background visuals using a model of the set.

Drawing on his previous experience shooting with SoftDrop, Förderer explained that “the best result is achieved if the source that is lighting the backing comes in at a steep angle from below or above. Since I wanted to create a hot horizon to give the illusion of depth, it made sense to place our lights
in a long row on the floor behind, and in front of, the backing.”

Backlighting the SoftDrop from the ground up.

Markus and his gaffer, Uwe Greiner, ended up using 200 Arri SkyPanel S60s side-by-side on the floor to backlight the drop. For the front light, they hid a row of ETC wash lights just below the horizon line of the sand floor. Uplighting the drop also saved the production a lot of rigging time and budget because the lights were literally just placed on the ground. 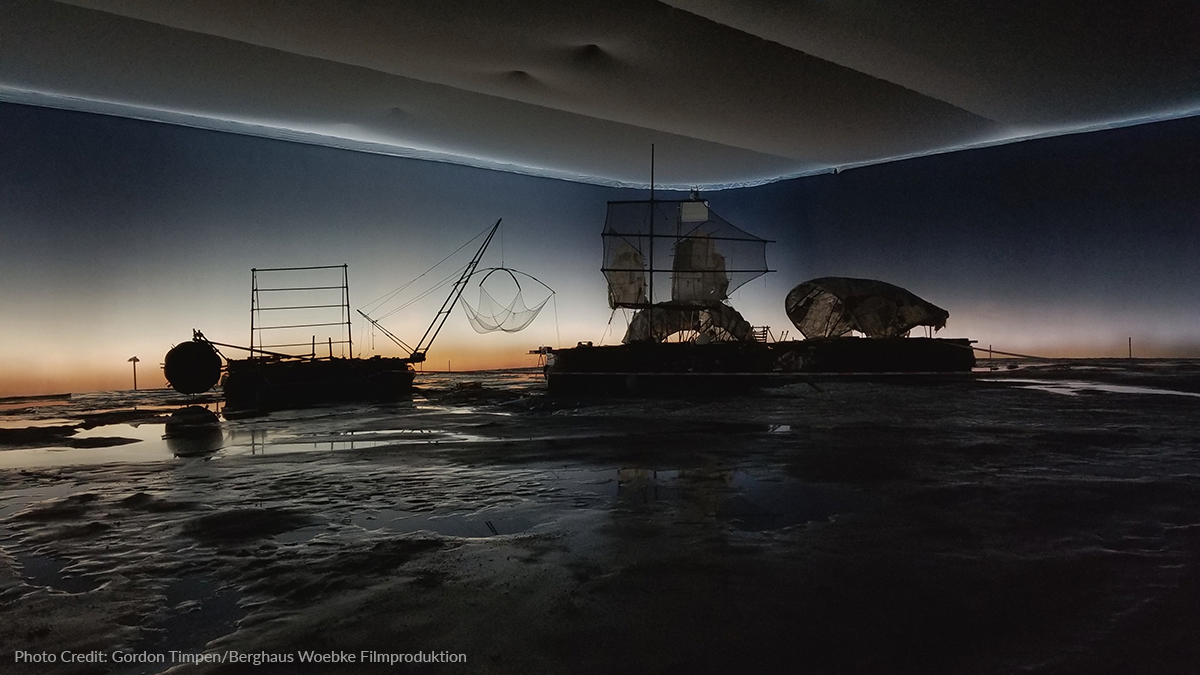 A photo from the lighting tests showing the SoftDrop lit from the front.

Perhaps the most striking effect that Förderer and Greiner achieved, however, was creating the sun on stage. They used an 18K ARRIMAX behind the SoftDrop to achieve the look of the sun piercing through clouds. “We had a fantastic lighting crew on this production,” Förderer recalled. “We were
all on the same page to create naturalistic lighting that provided the actors a lot of freedom to move within the set.”

The sun in the upper right of this photo was created with an 18K ARRIMAX behind the SoftDrop.

When it was all said and done, the filmmakers had created a set that perfectly matched the German Tideland location. The set design even earned Production Designer Julian Wagner a 2021 Lola German Film Award for Best Production Design! The filmmakers did such a good job re-creating the location that even they had a hard time differentiating between what was shot on stage and what was shot in the mudflats. Förderer shared that the only way he could tell the difference is if the shot had specific details that gave it away. “The transition between location and stage is seamless,” he reported. “The printed sky reflections that the SoftDrop created in the wet floor made the setting feel so authentic that we were able to go back and forth between the location and stage shots many times within the same scene.” 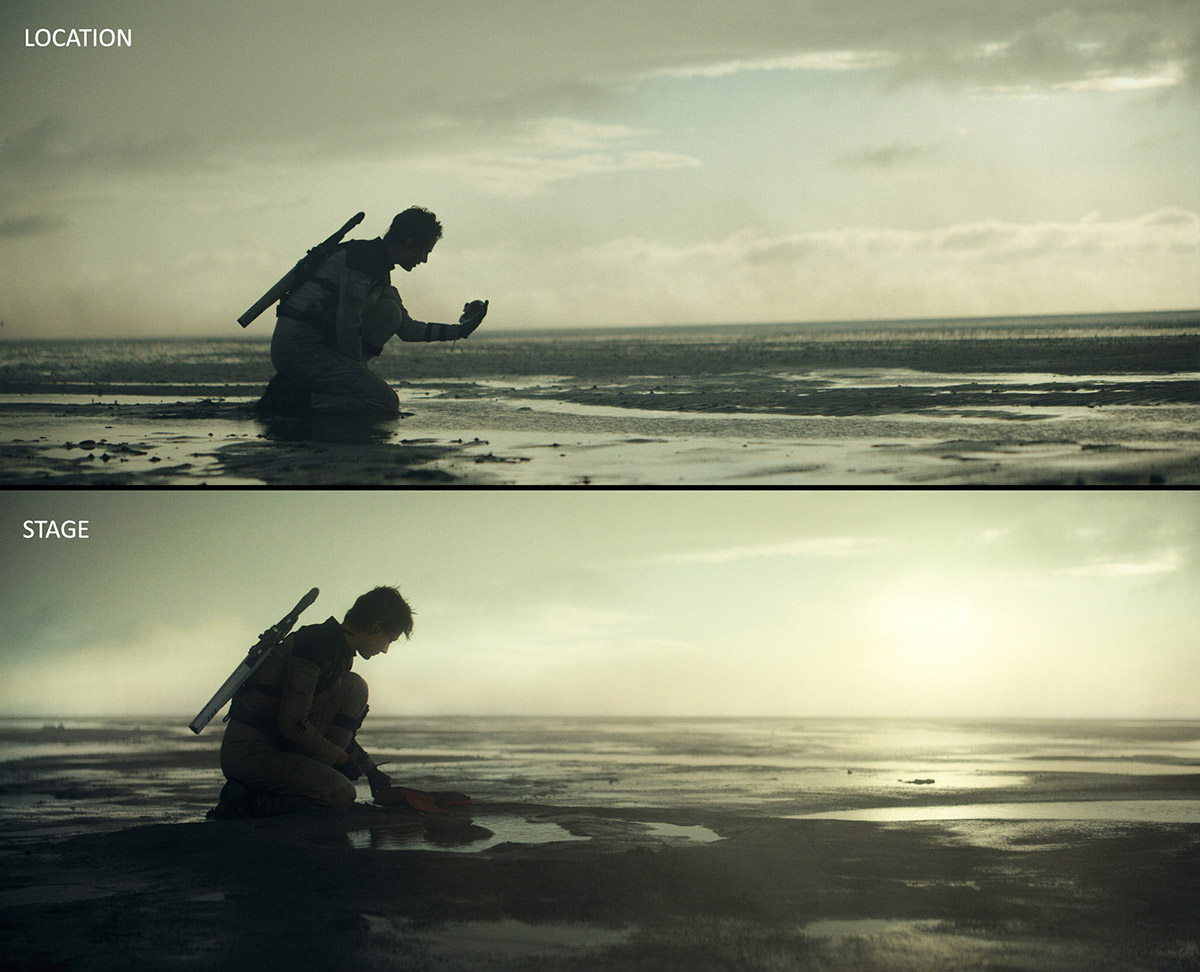 The Colony is available to rent or own via Amazon or iTunes now, and it looks amazing. Many of the early reviews praise the set design and Markus Förderer’s cinematography and actually note how the filmmakers used practical background visuals to create the setting of the film. We were thrilled to work with Markus again on this production, and we’re very proud that Rosco SoftDrop was a key component to this film’s success. Visit www.rosco.com/softdrop to learn more.