Chicago’s world-famous Field Museum is not only renowned for the exhibits housed inside its walls, but also for the touring exhibitions that are designed there, and then travel to other museums around the United States. Such is the case with Antarctic Dinosaurs. This interactive exhibit takes visitors on a journey deep into the past to one of the most remote areas on earth in order to showcase the fossils of newly discovered dinosaurs and the habitat they lived in. Conceived by the Field Museum’s design team and Thatcher Waller, Senior Designer at Morlights, the exhibition immerses the visitors in a prehistoric landscape of the once lush, green continent through multi-sensory experiences that include a dynamic Aurora Effect created by Rosco X-Effects LED projectors.

Based on the work by Head Paleontologist Pete Mackovicky and his team of scientists, the exhibition aims to show not only the dinosaur remains from Antarctica, but also the painstaking work of fossil hunting and excavation that went into these discoveries. To distinguish between the two narratives, visitors are taken backwards and forwards in time. The rooms evoking the distant past are designed to illustrate dark winter skies and polar lights, while the other rooms are set up to show the modern excavation process taking place during bright summer days. 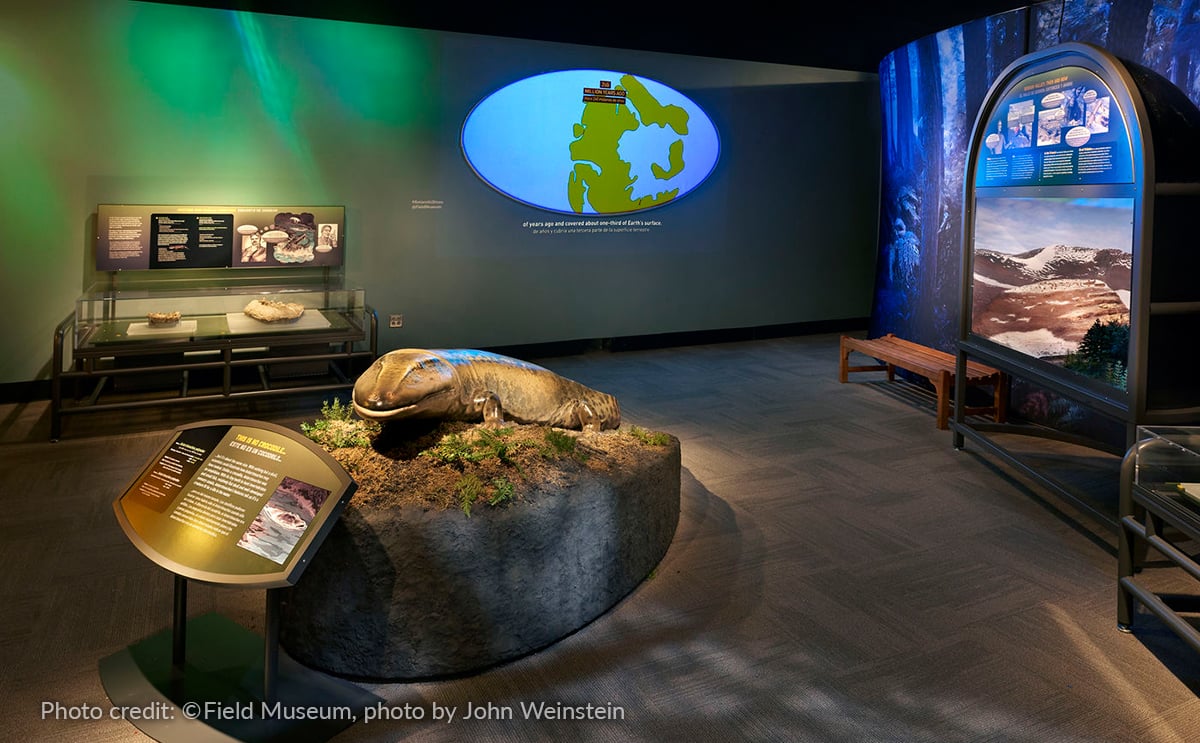 The “Origins of Antarctica” room features an aurora effect on the wall behind the Antarctosuchus.

The Field Museum’s design team explained that “Antarctica is a beautiful and remote place that few people get to experience,” as they described the goal of the exhibition. Their design was conceived to “transport people to this harsh, mysterious landscape through immersive environments, images, lighting, sound, and even smells. Specialty lighting reinforces the sense of time travel with contrasting summer ‘sunlight’ for today, and the wintry ‘polar lights’ for the distant past.”

The “World of Antarctic Dinosaurs” room features an aurora effect behind the Cryplophosaurus ellioti – the largest dinosaur found in Antarctica.

Thatcher specified our 5500K X-Effects LED projectors inside the “Origins of Antarctica” room and the “World of Antarctic Dinosaurs” room of the exhibit. Their purpose is to project vivid aurora australis effects (the southern equivalent of the northern aurora borealis) on the walls behind the prehistoric animals. Each X-Effects LED fixture was equipped with a 70º Lens, a Green Aurora Effect Filter, and one Cyan Waves ColorWaves Gobo to replace one of the standard Effect Gobos inside the light. “We needed a bright, standalone LED projector to create aurora australis effects with a short throw that would stand up to multiple installs,” Thatcher commented, noting that “the Rosco X- Effects LED fit the bill.” The exhibit has since left the Field Museum. It is currently at the Natural History Museum in Los Angeles, CA, with other exhibition dates scheduled for years to come. To learn more about the Antarctic Dinosaurs exhibit and its upcoming touring schedule, visit the Field Museum website.

For more information about the fixtures the designers used to create the realistic polar lighting effects inside the Antarctic Dinosaurs exhibit, explore the Rosco X-Effects LED page on our website.