Elevate Your Storytelling With Rosco SoftDrop®

For an inspired, fresh approach to filmmaking, sometimes it helps to examine the latest projects coming out of film schools around the world. Paul Nungeßer, for example, is a third-year cinematography student at the internationally renowned Filmakademie Baden-Württemberg in Ludwigsburg, Germany who has several short films, a feature documentary and a series of music videos and commercials under his belt. For his recent Filmakademie project – a “cinematic poem” entitled 8’20” – Paul knew he would need the scenery in the background to help him tell the story, and he shared with us how he used a Rental Rosco SoftDrop to advance the plot of his short film. 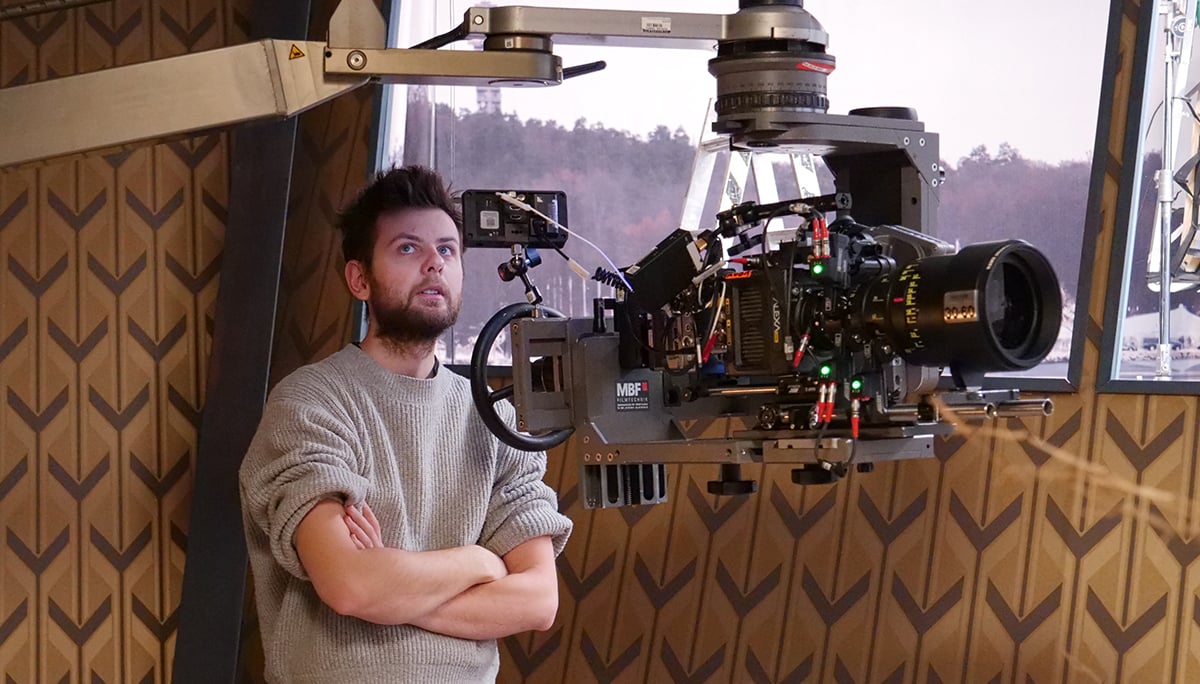 8’20” revolves around the idea that, if the sun were to explode, it would take eight minutes and twenty seconds for that explosion to reach Earth. “Rather than relying on a doomsday storyline, we tried to find the beauty in the small moments of a world about to end and the melancholy of doing certain routine tasks for the last time before facing the inevitable end,” said Paul. “With just one day of filming, it’s more of a fragmentary collection of what those last eight minutes would look and feel like.” 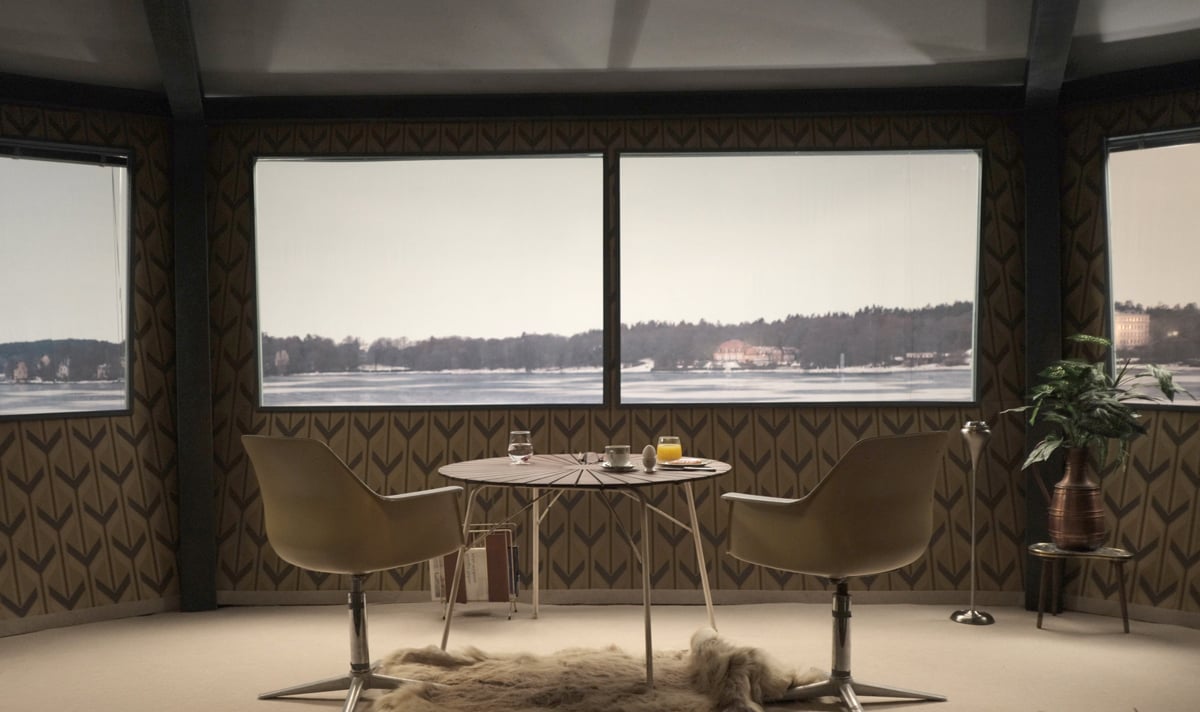 The Cinematography and Production Design departments collaborated together to “build a shared visual understanding” around the chosen concept of an old airport control tower. Paul worked with Art Director Lorena Hahn, who transformed their set into a 1970s Scandinavian architect’s villa, and they co-wrote and developed an idea together for that space. 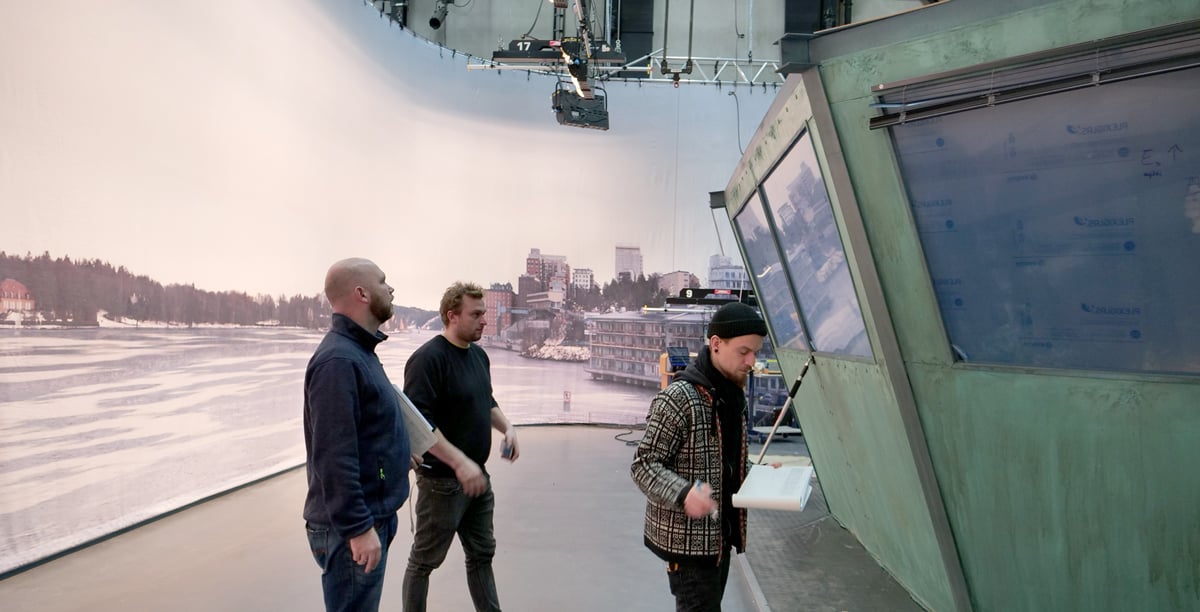 The scene was filmed inside one of the school’s sound stages. When Paul first saw the draft for the set, he took notice of the design’s gigantic windows and wanted to use them to tell the story. Having learned about Rosco SoftDrops at the AFC trade show in Paris, Paul worked with Rosco to find the right Scandinavian SoftDrop from the Rosco Rental Backdrops catalog. He and Lorena chose a 6x42 meter (20’x138’) SoftDrop depicting a lakeside view in Stockholm, Sweden. 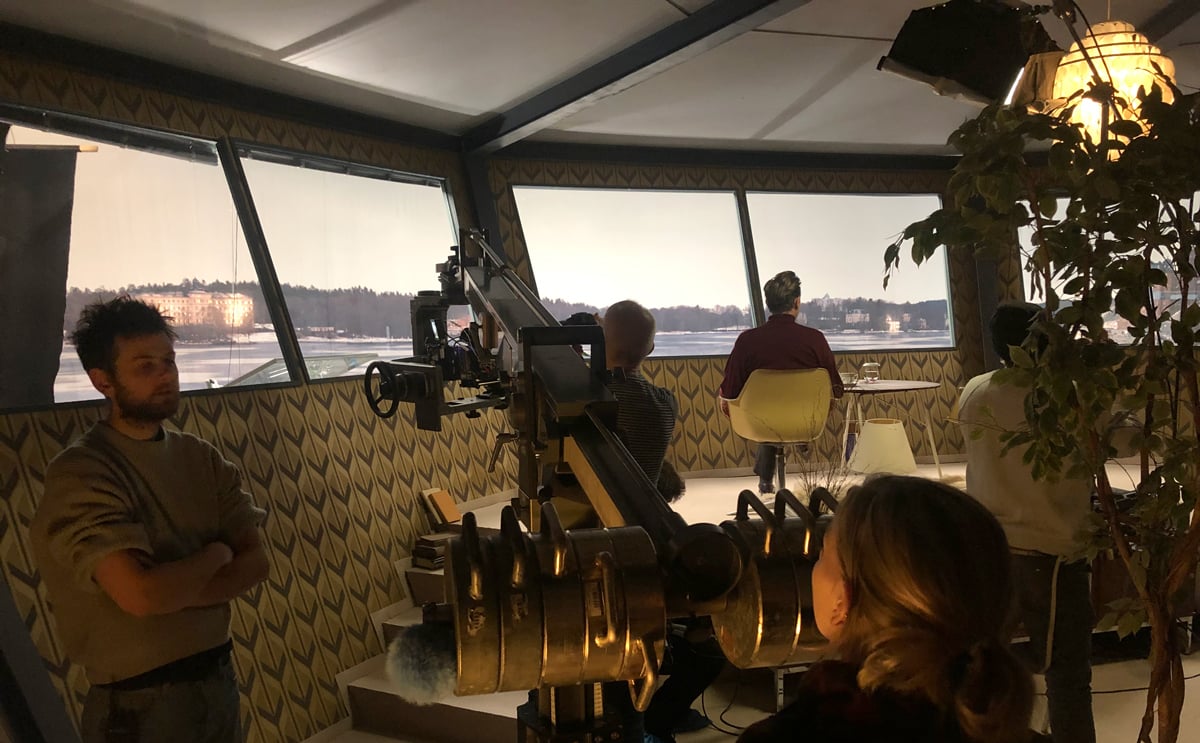 “Usually when shooting in the studio for student films, it’s always about obscuring the outside by boarding up windows or hanging curtains because most of the time there isn’t enough money or expertise to make an outside world believable in the studio,” said Paul. “But for this project, I knew the whole setting depended on this stunning view outside.” 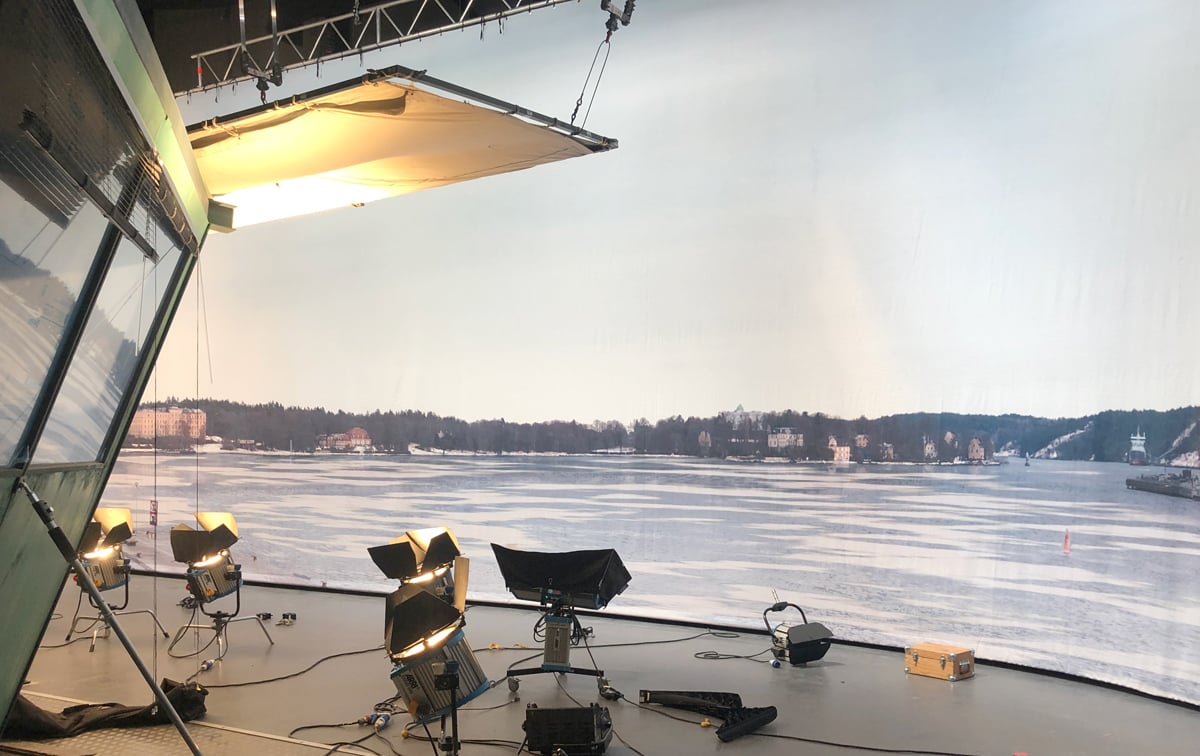 The fabric Rental SoftDrop allowed for easy transport and handling on set. Paul’s team only used about 25 meters of the drop based upon the available studio space. The backdrop installation took two crew members about three hours thus allowing others to divide and conquer additional on-set tasks. “A vinyl backdrop of that size would have been too much to handle for a small student production like ours,” said Paul.

The film opens with a realistic setting. Paul and his crew rigged asymmetric flood lights in the air to front light the SoftDrop, and smaller (300W-1000W) tungsten fixtures to light it from behind. As the film progresses, bizarre things start happening; the elevator malfunctions, the chandelier begins to shake, and we see raindrops streak upward on the window as the sky lighting turns a vivid shade of red. The red lighting was a combination of gels and color-mixing LEDs, and their exploding sun was a 10K tungsten placed behind the SoftDrop (with some Rosco Super Heat Shield to protect the fabric drop). “I really wanted to see how far I could push the backdrop when the colors became more intense and artificial, and the SoftDrop held up really well,” said Paul.

Paul had previously worked with green screen and projection technologies for creating background visuals. He shared two main advantages to working with SoftDrop. “Firstly, you can light with it rather than against it. By lighting the backdrop, you can actually light your set with it. It’s like having a massive 60’x20’ butterfly that you can bounce light off of.”

He went on to explain that the second advantage is setting the scene. “Having a material backdrop allows us to focus on the creative aspects of the shot and makes life easier for the art director, for me as the director of photography, and even for the actors,” said Paul. “In one of the final shots, a pair of glasses float through the air, and all the reflections and transparencies simply would not have been possible with a green screen or projector.”

Paul’s team is in post-production now and anticipates finalizing the short around summer 2019 when they hope to submit the finished film into the film festival circuit. Paul relayed how grateful he was to have Rosco’s pre-production support for this project. He credits everything going so smoothly on set to having access to and assistance from Rosco’s Sarah Horton prior to the shoot.

We wish Paul and his crew our best as they finalize this project - and in their future filmmaking endeavors. If you’re interested in renting a Rosco Backdrop for your next project, visit the online Rental Backdrop Catalog on RoscoDigital.com

Creating A Horror Look On An Indie Budget With DMG Lights

5 Ways To Use DMG DASH™ To Light A Short Film

Chinese Cinematographers Expand Their Vision With A Visit to Rosco