The Birth Of A Gobo: Life, Liberty And The Pursuit Of New Gobo Designs

While designing a production of the musical 1776 at the John W. Engeman Theater, Lighting Designer Cory Pattak needed to project imagery for a pivotal moment in the show. His solution was to work with Scenic Designer Stephen Dobay to create a pair of Rosco Custom Gobos for the production - and those two patterns are now official Rosco Standard Gobos! Below, Cory shares the history of the “Independence” gobo designs.

There is a fairly iconic moment often seen in many productions of 1776 where the play ends with the signers of the United States Declaration of Independence all freezing onstage while a scrim flies in downstage depicting either a painting of the original signers or a rendering of the actual document. The scene slowly bleeds away as the imagery becomes clear. Since the Engeman Theatre has no fly space, Director Igor Goldin and I discussed ways to still create a “moment” at the end of the show to leave the audience with a powerful final image. 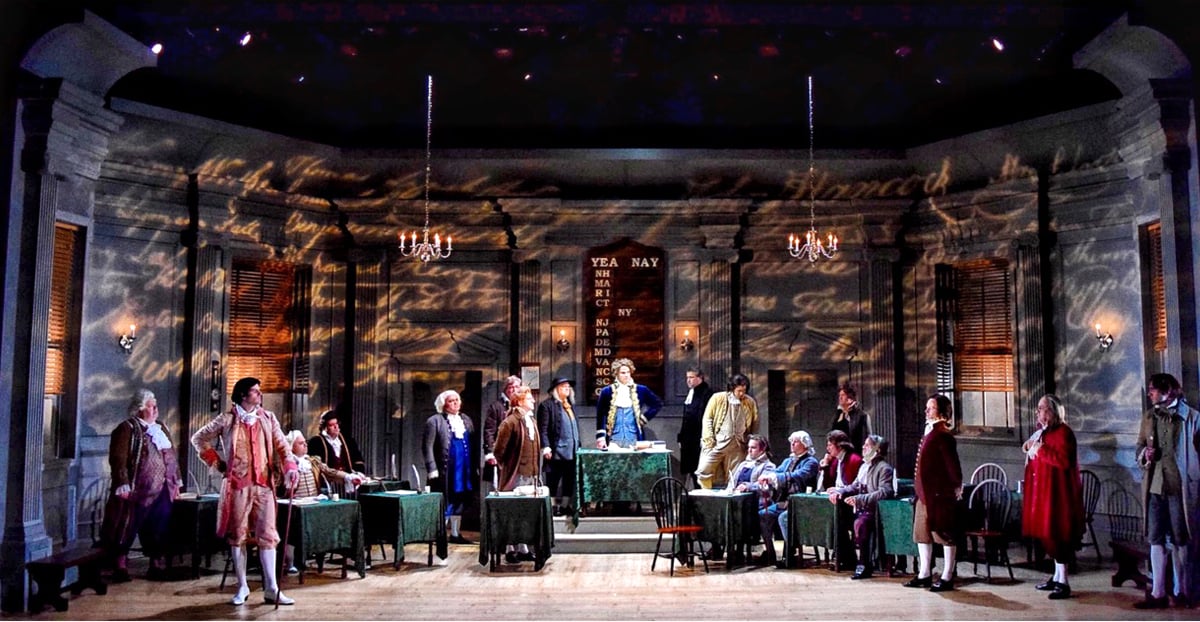 While I’m typically against using projected gobos that are meant to represent “real things,” this seemed like the perfect moment for such an effect. Scenic Designer Stephen Dobay and I discussed projecting all the signatures on the back wall of the set. He created the artwork and we refined the shape and size to make the text feel organic but still recognizable. We originally considered trying to use Rosco iPro Image Projectors, or print our own artwork, possibly in conjunction with an LED source so as to not overheat the acetate. Ultimately, we decided it was best to have the gobos custom made in glass. The gobos were placed in a pair of ETC Source 4 26°’s, one on each side in a Box Boom from a low angle. As the church bells chimed, and each character crossed to sign the declaration, the gobos faded up in a long count, slowly revealing the names. In the final blackout, the image lagged for a beat, the continental congress disappearing into a sea of their own names. It was a great solution to creating one final surprise for the audience.

Because 1776 is such a popular title for schools and regional theaters, R82866 Independence 1 and R82867 Independence 2 are both excellent new additions to the Rosco catalog. Thanks to Cory Pattak, these two glass gobo designs can now be found inside our library of Standard Gobos for everyone to use in their production of this beloved musical – or for use during Fourth of July events.

Cory Pattak is a New York based Lighting Designer with credits Off-Broadway, Regionally, and Internationally.  He has served as Associate for half a dozen Broadway shows including Newsies and Peter & the Starcatcher and he is the host and creator of the popular, design-focused “in 1: the podcast” – available for download on iTunes.

Gobos for Architecture – They're More Than Just Logos!