Needing a place to live in May, I contacted a promising Airbnb host in Inwood, NY. Who would have suspected that I would end up living in the apartment of former Lighting Designer and active Choreographer-Director Christopher Caines? We thought that it would be interesting to write about Christopher’s career - past and present - as it unfolded in a series of evening conversations. 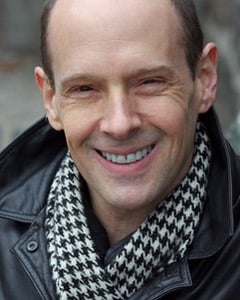 Christopher hails from Halifax, Nova Scotia. After receiving a degree in literature from Harvard, he moved to New York City, where he was awarded a scholarship at the Merce Cunningham Studio. His fascination with lighting dates back to the first dances he choreographed, working with student lighting designers. “I realized that in dance, the lighting often constitutes the set, defining the volume and space, which makes the role and responsibility of lighting different from what it is in opera and theatre.”

Christopher’s lighting career began when the Cunningham Studio’s TD, Nicole Werner, hired him as her assistant, relieving him of the janitorial duties that paid for the portion of the tuition that his scholarship didn’t cover. He became her electrician and board operator for the almost weekly productions that she lit for the companies who rented the studio. He was subsequently hired as the TD at Movement Research’s loft theater on Varick Street, beginning a ten-year career as a lighting designer, primarily for dance but also for theater and music, as well as becoming resident TD-LD for several nonprofit organizations. His nonstop activity as stage manager, ALD, master electrician, board op, and sound technician included a few European and American tours and lighting projects for hundreds of artists while he began to choreograph his own projects and danced for other companies. 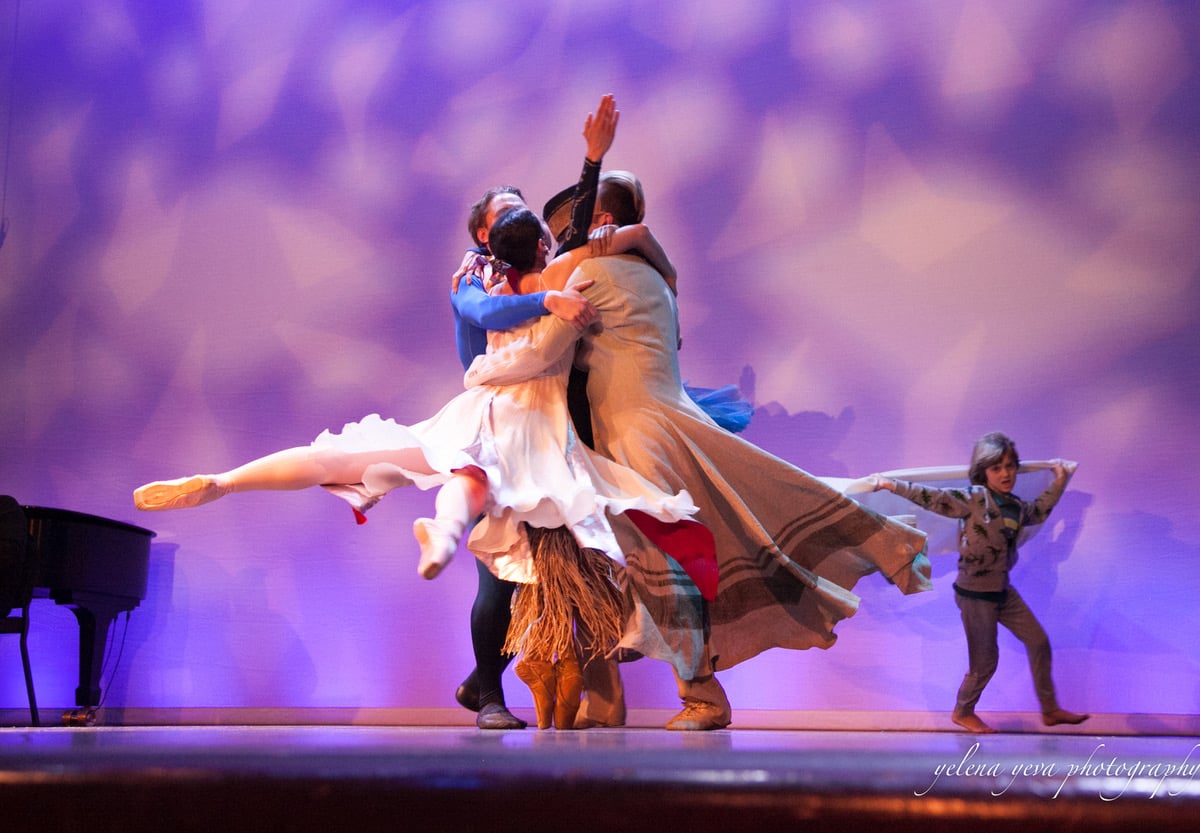 THE KITCHEN REVUE (2015)
Choreography, Direction & Lighting Design - Christopher Caines; Photo - Yelena Yeva
"I had to light this commissioned work myself in very little time on the day of the premiere using the venue's rep plot. The templates were part of the plot, so I did not choose these breakups - but I was able to ask for this focus, combining hard and soft focus to give a surreal effect to one of the ballet's narrative peaks."

Ask Christopher who was the biggest influence on his lighting and he answers, “Jennifer Tipton” without missing a beat. “I worked as Jennifer Tipton’s board operator during a two-week workshop for designers and choreographers. Her intellectual acuity in this field is without peer. We built up an analysis of the fundamentals of dance lighting step by step, and what impressed me the most was her extreme attentiveness to the more peripheral effects of light—flare, bounce, the direction of shadows—and her notion that the basis of all her work is sunlight. I am still one of those geeks who sees R78 in the color of a sunset shadow.”

Christopher loves to talk about color, explaining why he favors a “restrained palette.” He agrees with Tipton that any color filter imposes a restriction on the entire spectrum and consequently on the hues of sets, costumes, and skin tones. “Of course I have my ‘go-to’ colors, like R321, R378, R382, and many of the other 300-series colors.” 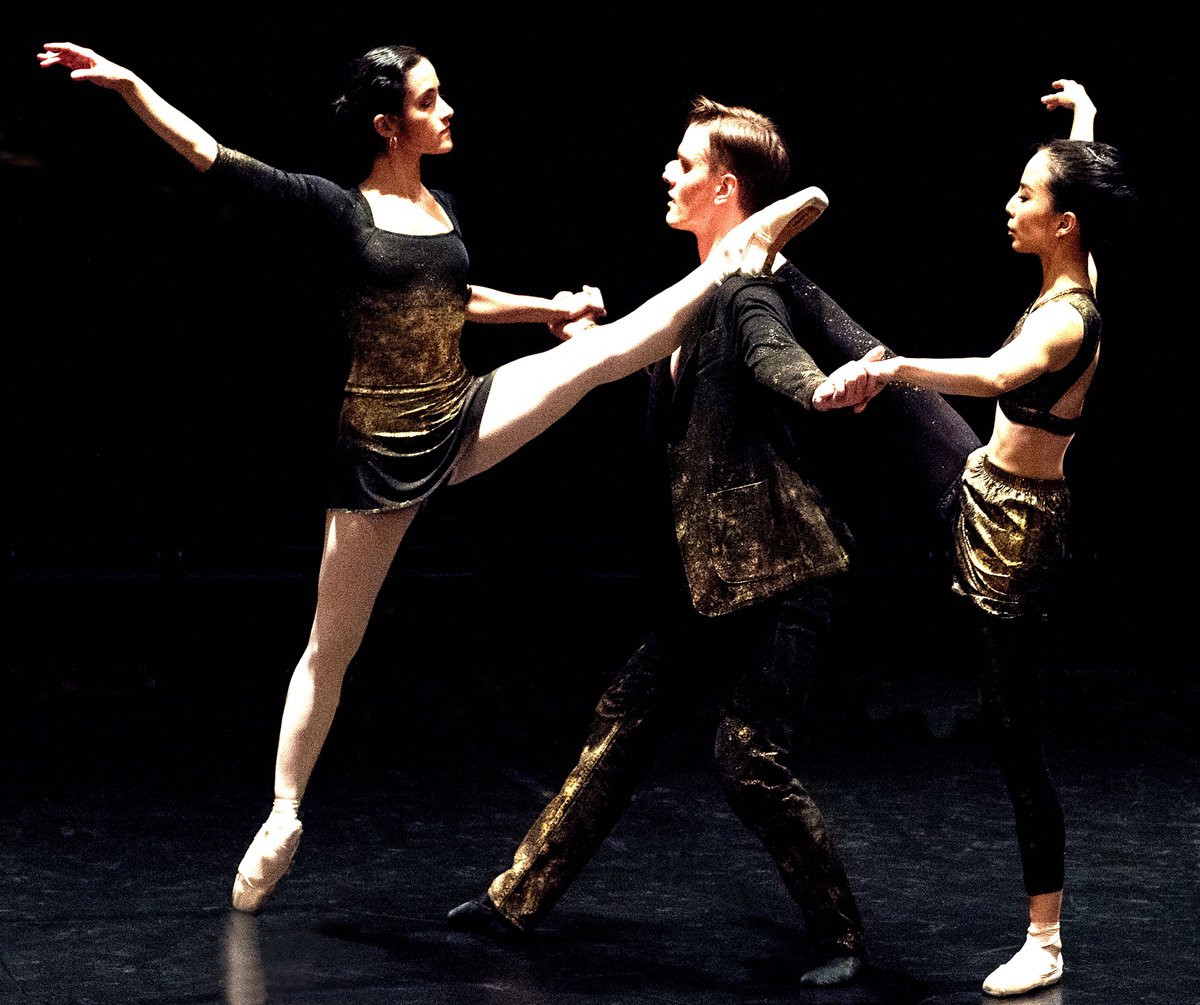 Dancers Elisa Toro Franky, Luke Tucker and Mayu Oguri perform in "four→ONE" (2017)
Choreography, Direction & Lighting Design - Christopher Caines; Photo - Steven Pisano
"Lighting in this venue was severely restricted: a no-color, 8"-Fresnel downwash and some chandeliers. Costume Designer Greg Gale's choice of metallic effects in the costuming for this site-inspired ballet's act 2 was a deliberate choice to turn this restriction into an advantage."

Christopher incorporated gobos into many of his designs “to define the space, not just the deck or cyc.” He believes that the templates create a heightened contrast in which one still “really sees.” His favorites are leaf breakups such as R77732 Realistic Leaves, which he uses slightly out of focus as a breakup-wash. “Templates enhance atmosphere while, in my opinion, video usually upstages the dancer and makes the live performer look small and boring. We all spend so much time staring at media on our screens that it’s the last thing we need in the theatre, and today’s trendiest video animation will look like an old screen saver next season.”

ARIAS (2011) - excerpt from act III, "Night: In the House"
Choreography - Christopher Caines, Lighting Design - Jay Ryan
"The first two acts of this three-act ballet take place outdoors, first on the terrace and then in the garden of a country estate. For act three, I asked Jay to come up with some simple effect that would immediately establish that we have moved inside the house, late at night. Rosco's Jacobean window template (77141), with the lower third masked by shutters, was his elegant solution.”

Finally I wanted to know how he collaborates with his lighting designers, given his lighting background. “I treat a designer the way I liked to be treated as a designer myself, sharing my imaginative vision of the work in lighting-friendly terms.” Christopher believes that true leadership means hiring the right person and letting them do what they do best. “I know how not to say silly things,” he says, “like ‘Make it darker by putting more blue light over there!’” 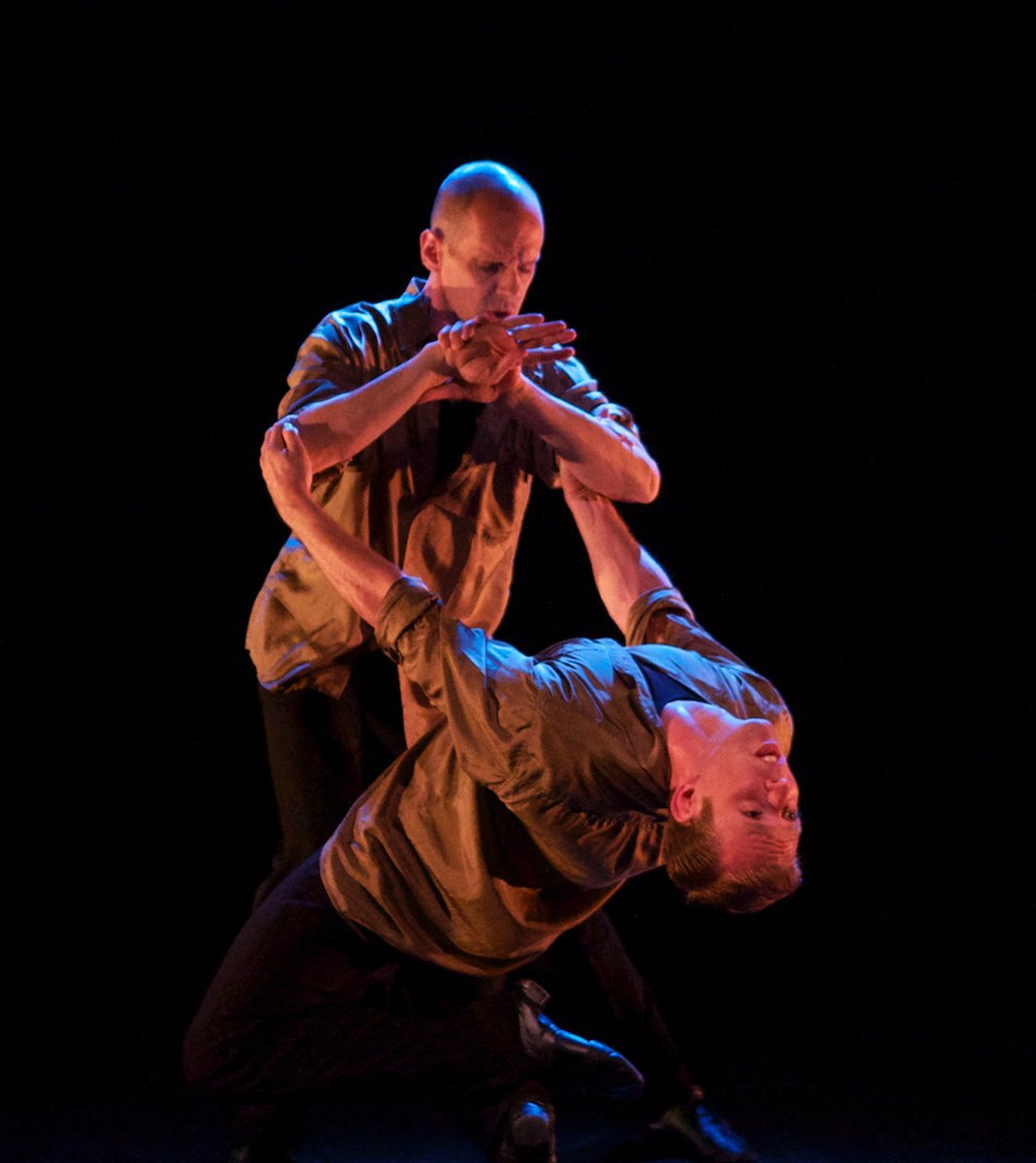 Christopher Caines and Timothy Kochka in "Sin Mo Làmh" (There’s My Hand) (2013)
Choreography and Costume Design - Christopher Caines; Lighting Design - Scott Nelson
"I asked Scott to make this scene seem to float in a dreamlike void—and I think he succeeded."

May turned out to be one of the most interesting months that I can remember. I always imagined that there are dancers and choreographers who understand lighting but I had never met one who had actually been a technician and designer. It was a treat to meet and get to know Christopher who speaks with such eloquence about both subjects. To learn more about his work, be sure to visit www.christophercainesdance.org

Shooting Inside A Mini Cooper With RoscoLED® Tape