Lighting Designer Christina Watanabe knew she faced a major challenge when she went into tech for The Wild Party at Post Theatre Company in Long Island, NY. Watanabe recalled how “the show was in a bit of a crunch. I was in tech for another show, but I had a week off before dress rehearsals,” she said. “My associate, Leslie Smith, focused the show based on my focus charts while I was out of town, but couldn’t stay for tech or dress. I had a second associate, Elizabeth Stewart, who could be there for the show's final dress. Knowing that I had this really tight turnaround, I needed to be sure of what I was putting in the plot. I needed colors that I knew and trusted.”

For the pure, bold colors her design required, Watanabe chose Rosco’s Storaro Selection. This catalog of ten richly saturated gels were developed by Rosco with Academy Award®-winning Cinematographer, Vittorio Storaro. While traditionally used in television and film productions, the Storaro colors are an excellent choice for scenes that require strong, emotive colors - on camera or on stage.

Rosco's Storaro colors have been part of Watanabe’s arsenal since her graduate school years. “The year was 2012, when either I found them in a swatchbook or in someone else’s plot. I remember that it became kind of a joke in grad school. We were all going to put Storaro Blue (R2007) in our plots, because it was such a beautiful blue. That was my way into the series. The colors were so true, so saturated, without losing the intensity.”

The fact that these colors were developed for use in movies didn’t faze Watanabe’s love of them. “Maybe people are afraid of film colors, but I believe in using what’s best for the plot,” she said. So, in approaching The Wild Party, Watanabe relied heavily on the Storaro colors to match the story’s passion and high emotion.

"I never found a red that made me happy until Storaro R2001," confessed Watanabe, "and now it is my red forevermore.” One-third of the conventional units in the plot were gelled with R2001, which helped her set the mood of the show right from the beginning. “The opening look when we meet Queenie for the first time, there’s a wash of red and we pick her out to foreshadow what was happening in the story." Wantanabe also described how part of the director’s concept was that the partygoers never left the space. Instead, they would lounge around on the moat surrounding the space. "I definitely made use of the Storaro Red to treat the actors as scenery and fill out the mood in there,” she said.

“Bold, pure color was always just sort of there,” Watanabe said, describing the light in the show. “It represented this dangerous passion as a part of the characters’ world, of their life. It’s inescapable. Especially in some of the exciting musical numbers, we just went for it.”

Going for heightened theatricality definitely paid off for Watanabe. Her design for The Wild Party earned her the 2019 Knight of Illumination Rosco Award for Musicals, Small Venue. “I looked back to see just how much I did use these colors, and I do remember that, at the time, I purposefully chose only Rosco colors,” she said. “Especially with a musical, there just wasn’t time to think about making changes if a color wasn’t working. We needed to go bold, and I knew Rosco’s Storaro Selection would deliver.”

Based in New York City, Christina Watanabe designs lighting for theatre, dance, music, and events. Her work has been seen across the country at Oregon Shakespeare Festival, Virginia Stage Company, Charlottesville Opera, White Heron Theatre Company in Nantucket, Massachusetts, Brown/Trinity Rep in Rhode Island, and a co-design on television for comedian Colin Quinn’s CNN program Colin Quinn: Red State, Blue State. A USITT Gateway Mentor in 2018, 2019, and 2020, Watanabe has previously served as faculty of the NYU Tisch Production and Design Studio. Watanabe is a member of USA 829. If you’d like to see more of her work, visit her website: www.starryeyedlighting.com. 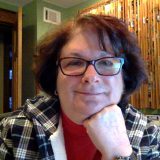