When Production Designer Daniel Novotny first read the script for The Arrangement, he was impressed with the authentic dialogue and its believable A-list celebrity love story that’s shrouded in the shadow of the main character’s ties to an organized “cult.” But one of the reasons he was attracted to the project was the challenge of building an ocean-front Malibu dream home inside the Vancouver soundstage where the series was to be filmed. To solve the challenge of building an ocean vista on a small soundstage, he hung Rosco SoftDrops outside the sets’ floor-to-ceiling windows to set the scene. 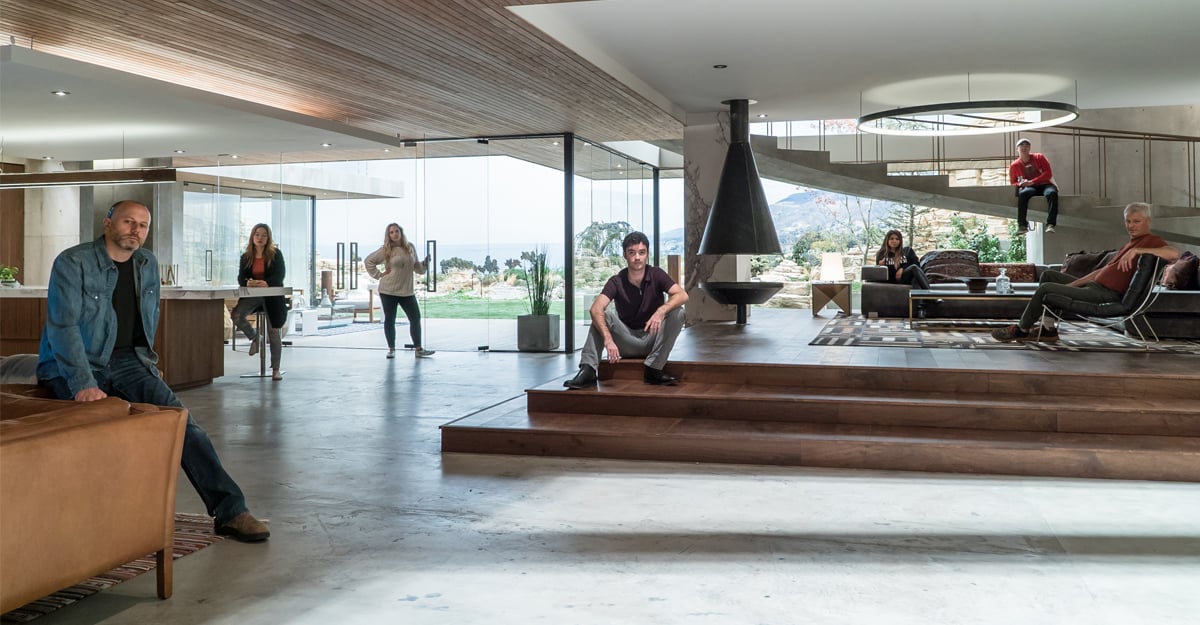 Novotny and his crew had about six weeks to deliver two completed sets: the “Malibu Beach Home” set and the “IHM” set. Each was fully built from the ground up on North Shore Studios in Vancouver. Because the LA-based designer enjoyed a special connection and history with Malibu (he proposed to his wife there), he already had the location of his “dream home” picked out – along with its ocean view vista from a bluff near Malibu High School. 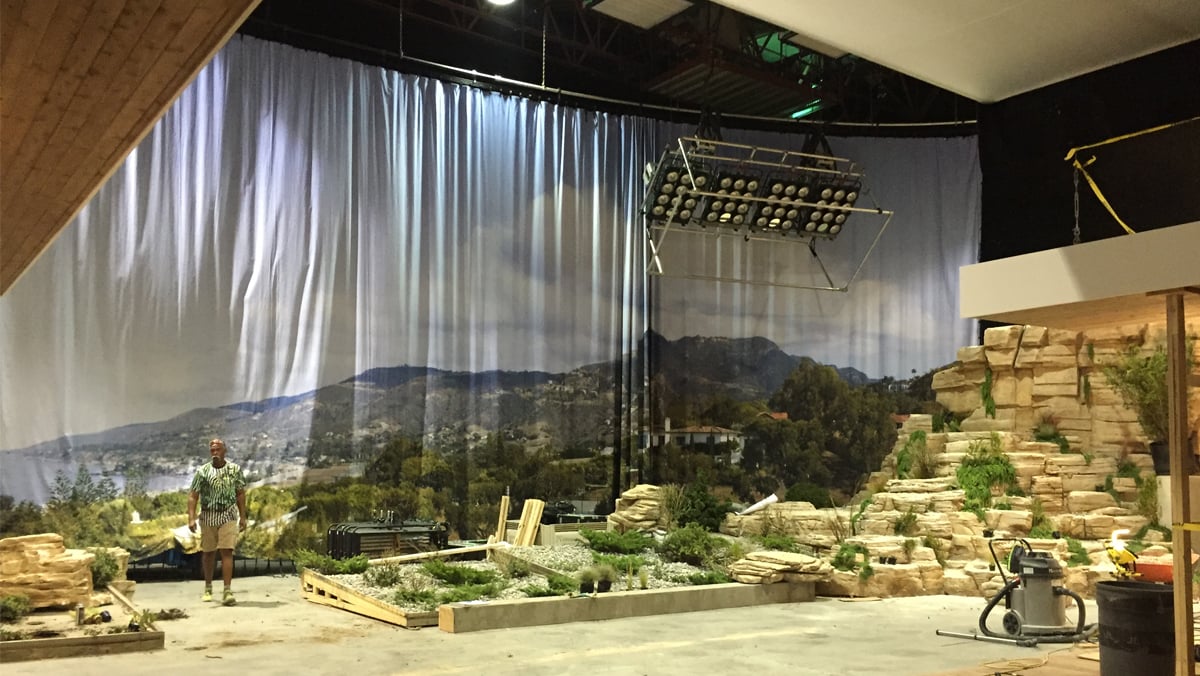 Dan had previously used Rosco’s vinyl backdrops on other productions, but this was to be his first Custom Rosco SoftDrop. He shared his vision with Rosco’s Phil Greenstreet, who then shot the Malibu location and oversaw production of the 30’x150’ Custom SoftDrop. “Rosco SoftDrops are my favorite backdrop because they are made from high-quality fabric material that is shippable, resistant to wrinkles and shine-free,” said Dan. “They are engineered to give DPs more flexibility when it comes to lighting.” 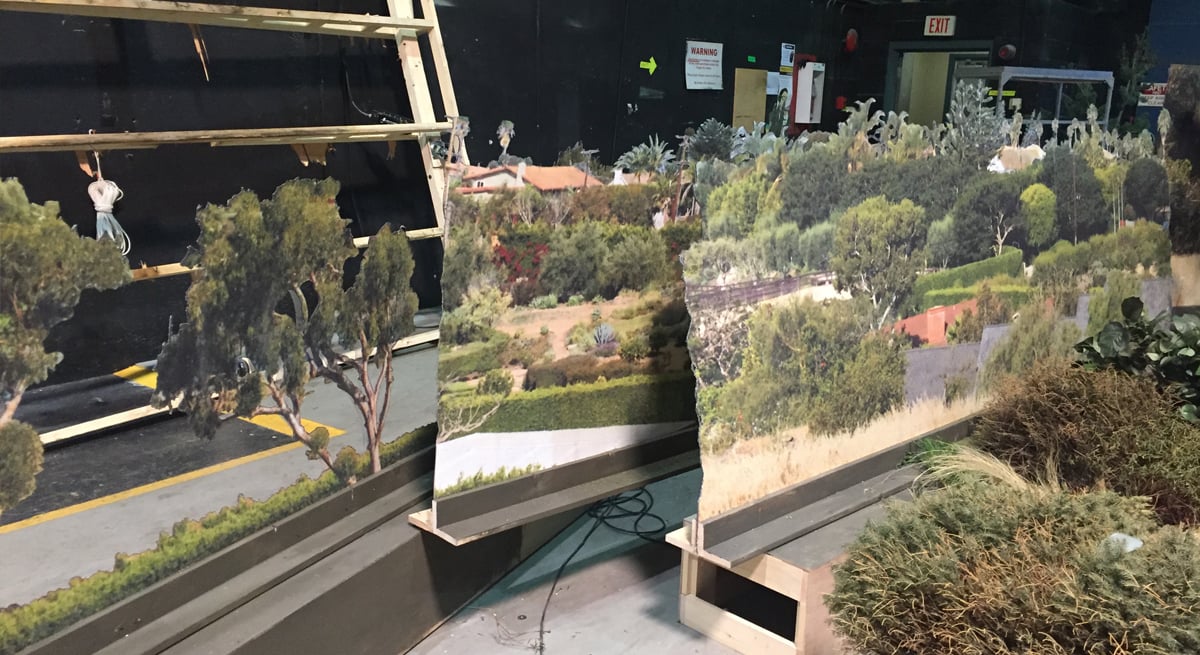 An exceptional ocean-front view is the celebrated feature of every Malibu celebrity home. Creating the illusion of depth for a realistic ocean view on a soundstage, however, is a difficult technical challenge for film crews. To achieve this organic look, Dan applied old theatrical principals to the SoftDrop backing. He used miniature theatrical scenery along with additional four-foot-high SoftDrop prints that were mounted onto plastic, and he placed all of it five feet in front of the main SoftDrop to create the appearance of distance.

The second set housed the cultish “Institute for the Higher Mind” (IHM) campus, which was based on Frank Sinatra’s Chatsworth home with yet again more floor-to-ceiling window views of California landscape. Dan chose a “Simi Valley” image from Rosco’s library of backdrop digital imagery, then worked with Greenstreet again to crop and adjust the file so that it was exactly the image he needed.

“For many reasons, the IHM set was more challenging because there was less of a main focal point,” said Dan. Unlike the Malibu Beach Home set, which had its windows focused in one direction, the IHM set needed a panorama backdrop because, as Dan notes, “Sinatra’s Chatsworth house featured floor-to-ceiling glass in every room around the property.” The set ended up with a 30’x150’ SoftDrop that wrapped around the entire IHM set-piece to provide its serene, California hills landscape in every room… and even a few “exterior” shots. 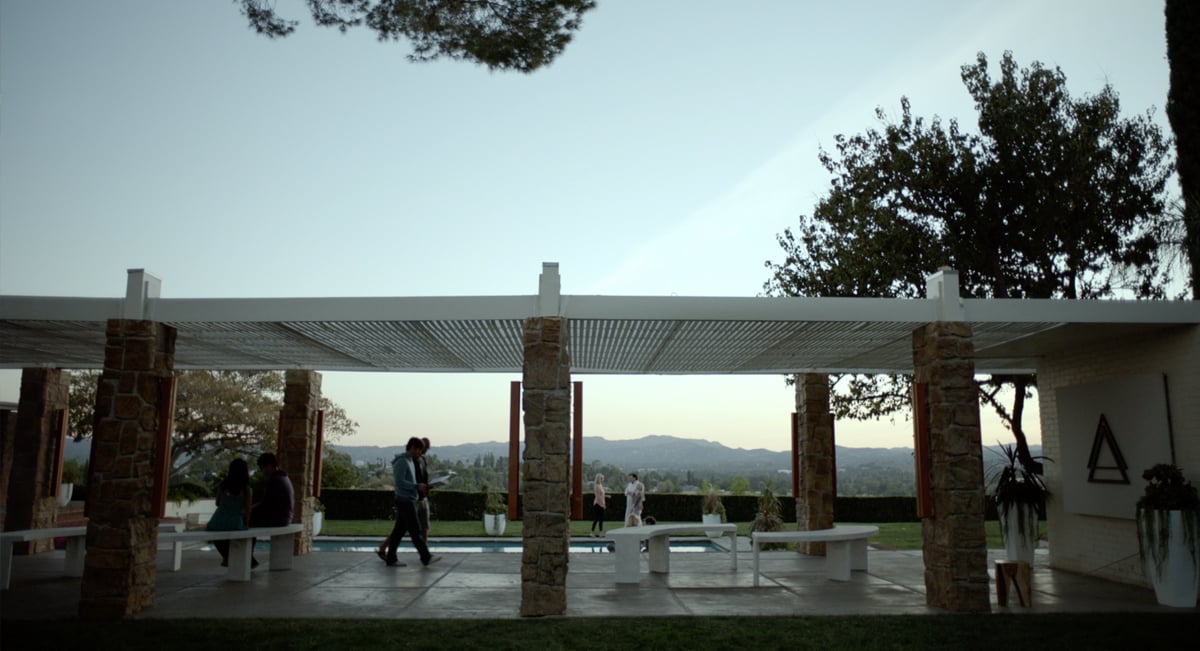 Dan is looking forward to returning to Vancouver and his custom-built sets and SoftDrops when he begins filming the 10 new episodes for season two of The Arrangement. If you’d like to see the SoftDrops in action, season one is available to stream in its entirety on E! Online. For more information about Rosco’s backdrop solutions, including Custom SoftDrops and their extensive library of backdrop imagery, visit the Rosco Backdrops & Digital Library web page.

Rosco Silk® 210 vs A 1K Fresnel A Real-World Comparison