Jay Duckworth is the props master at the Public Theater in New York who recently mounted Lin-Manuel Miranda’s Hamilton – a musical, set in the late 18th century, about Alexander Hamilton. The production called out for custom candles – which then necessitated custom candle holders. Jay and his team created 160 of them out of foam using a DRILL PRESS-LATHE! Yeah baby! Watch the video below to see Jay masterfully freehand a candleholder before your very eyes.

As you can see, Jay used three different coarse rat tail files to remove foam. Being round they were easier for him to hold on both sides. The carving threw off so much foam that he hooked up a Shop-Vac on the back to suck up some of the flying debris. 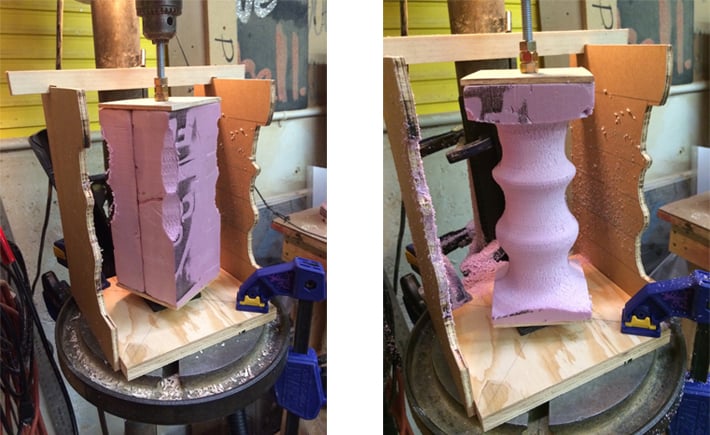 Once the holder was properly shaped on the drill press-lathe, Jay cut the top and bottom on the chop saw and brushed them with watered down Rosco FoamCoat. After sanding them down and FoamCoating, and then sanding again – he painted the holders gold before gold-leafing them. 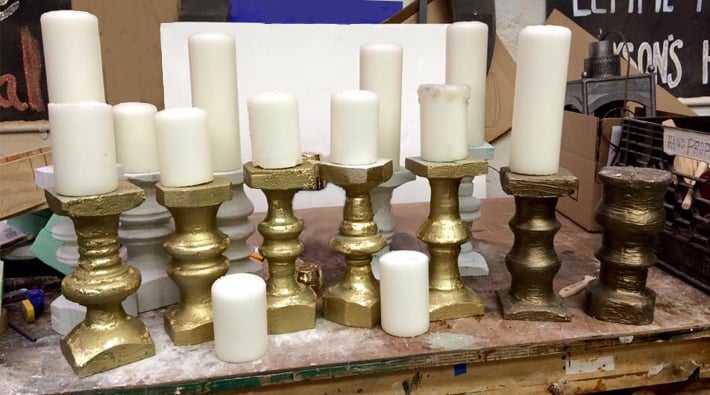 In the above picture you can see the FoamCoated candle stands behind the gold spray painted ones. Here is what Jay told us about using FoamCoat on this project: “The first coat of FoamCoat was watered way down, which helped us make sure that there was less sanding and it helped wash away any small bits of foam that may have escaped our first cleaning. I learned that technique from icing a cake. When you ice a cake you do a thin first layer so that no cake crumbs mess up your final look of icing. Additional coats gave us a believable enough surface to look like poured brass, which we then had to gold leaf so that they would shine when the lights hit them.” 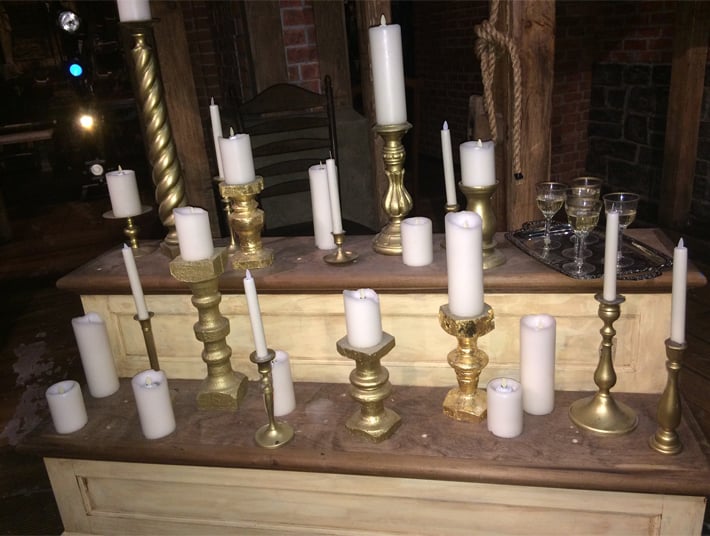 A hole in the center of the candleholder helped the electricians feed wires through the holders straight into actual wax candles that made them realistically glow and flicker for this enlightening musical. 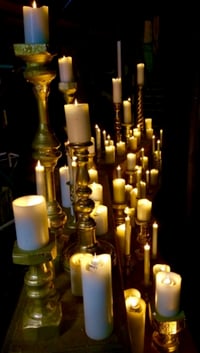 Make sure you check out the entire article from Stage Directions for a full description of Jay Duckworth’s candle holder technique.

Note: This production has moved to Broadway! It opens August 6th, 2015 at the Richard Rodgers Theatre in New York.

Creating Three-Dimensional Foliage Scenery = The Most Fun You'll Ever Have