Roller Girls of the Apocalypse

Conceptual Photographer Eva Creel was German born and Montana raised, and has since returned to Germany to continue her photographic career.  We first learned about Eva thanks to an article on InMyBag.net where she listed our Strobist Collection as one her "must haves" inside her camera bag.  At that point, we introduced her to our other Flash Packs and Filter Kits - to which she replied "these are wicked fun!"  and began to share her fantastic photos with us.  We've been enamored with her playful and colorful style ever since, so we were thrilled when she sent us this story of how she used our color filters to enhance her portraits for a local roller derby team. 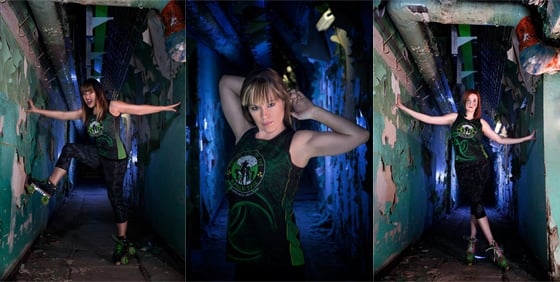 When the Roller Girls of the Apocalypse contacted me for new promotional photos, I was elated with the potential of the project!  Immediately, I began to think about where I could photograph them to really do their team justice - and Kindsbach Bunker soon came to mind.  It's an old cold war bunker in Germany that has 'baditude' written all over it. From the outside the bunker just looks like a hill with a metal door, but inside it's a dark labyrinth of hallways that lead to 67 different rooms. The owner of the bunker had warned me about getting lost in there and, as he handed us the padlock to the main door, he casually reminded me to make sure I didn't lock anyone inside.  As brave as the girls were, we ended up choosing a hallway somewhat close to the entrance. 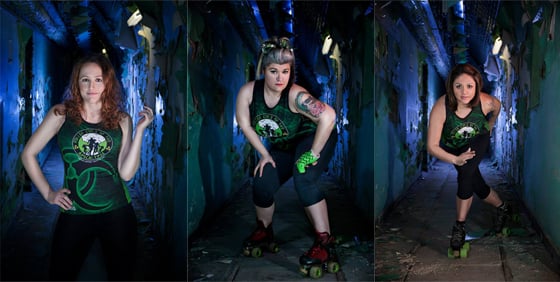 The lighting setup originally consisted of three speed lights, but we added another one for more light on the models legs and skates: one flash behind the model in the hallway, two in front, left and right (as best we could fit them in the narrow space) and one on the floor. I gelled two of the lights using filters from the CalColor Flash Pack. For the background light I knew I wanted a rich, dramatic color so I chose CalColor 4290 90 Blue – the deepest blue from the primary color section of the pack. The second gel, which I placed on the main front light, was CalColor 30 Red to add some warmth to the girl’s skin and avoid any green tinting from the bunker walls. 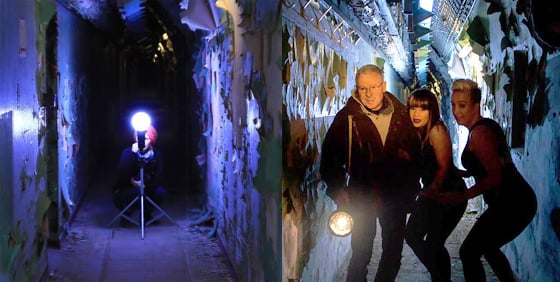 We spent three hours in that bunker! That included set up and shooting almost 30 roller derby girls. Editing in post mostly consisted of retouching skin, retouching some of the battle bruises and scrapes, and some dodge and burning for a little extra drama. It's worth noting that I did not color-correct any of these images.

I am so impressed with the results of adding the CalColor blue to the back light. The images with the blue-colored background compared to how the image looked without it were night and day to me! That little piece of gel is what made the images "Apocalypse Derby Girl" worthy. 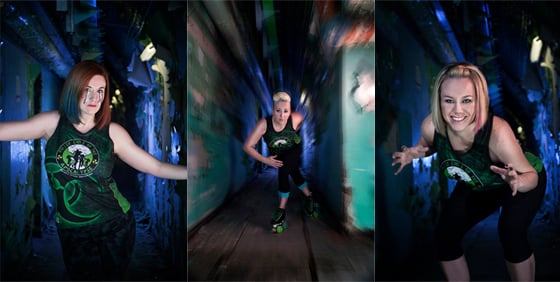 To see more of Eva Creel's photography, you can visit her website and we strongly suggest you follow her Facebook page to get updated on her fabulous work as she posts up new photos.

The Rosco Story: From Gels To LEDs As told by the Rosco Stand at Light + Building 2016