As regular readers of Spectrum know, Rosco has asked for lighting designers to submit photos of the design work of which they're proud of, along with a narrative of why they chose the colors they did and what they thought their design accomplished.

Our goal was to share these images and narratives with the rest of the lighting design community in hopes that it would inspire readers to produce their own ideas and insights, sometimes building on the work of others and sometimes taking off in a new direction.

The response has been extremely gratifying. If you have not yet sent us your best work and would like to receive a unique piece of swag with which we use to thank all of the participants, it's not too late to do so. Details can be found here: http://www.rosco.com/sharingforswag 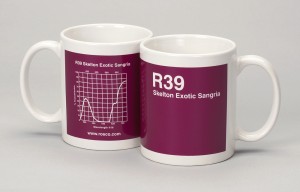 You'll receive a Rosco color mug for submitting your work.

We currently have close to 1,000 photos of theatre and event lighting. All of them are interesting and some of them are spectacular! In order to function as a real resource for designers, the material clearly needs to be organized, classified and made searchable. We are working on that now and will soon have it all organized into a color research library that lighting designers can use as they are investigating their color palettes for upcoming productions.

Meanwhile, we thought some of the most interesting work might be helpful to you right now. You can see some of the shared work below, but if you'd like a full overview, without comments from Rosco, you can see them here: http://www.rosco.com/sharingforswag/entries 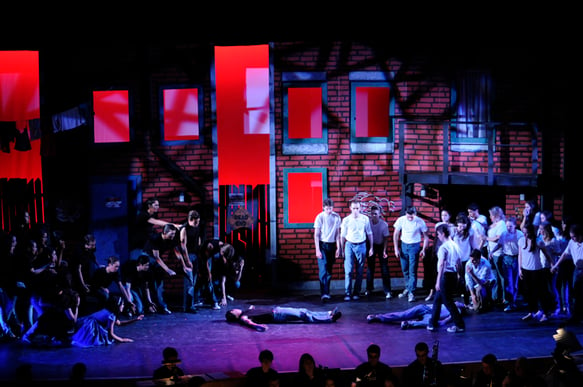 Benjamin Green writes: R124-Cyc Silk Red on the cyclorama from both the top and the bottom to highlight Bernardo and Riff's death during the dream.
R382-Congo Blue from a low sidelight angle to portray a dreamlike quality with harsh shadows on the ensemble.
R60-Front light to maintain a pale yet not too cold illumination of the actors.  Also used as a downlight and a low front fill.
Gobo R77228 shooting from SL & SR to illuminate the city facade with texture akin to light broken up by fire escapes.
West Side Story, North Kingstown High School Auditorium, lighting design:  Benjamin Green.

Rosco Comments: West Side Story is one of the most widely produced musicals in schools and regional theatres everywhere.  Saturated reds and blues are an integral part of the palette in most productions.  R124 Cyc Silk Red is a gently striated filter that allows the light to climb up and down.  Other colors in the “cyc” series are green, blue and amber, as well as R160, Light Tough Silk, a clear diffusion material. 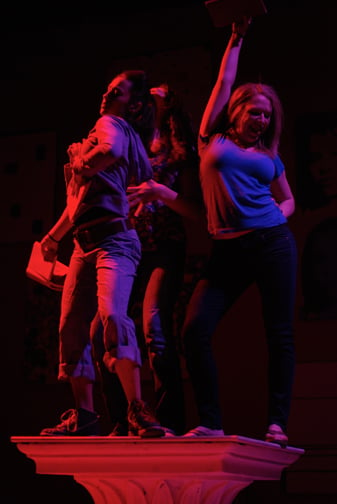 Jay Zawacki writes: Production: Moliere, The Learned Ladies, Boston University CFA Director: Jason King Jones
Actors: Chelsea Kurtz (Left), Lizzie Bassett (Back), Amanda Mason (Right)
Colors Used: R27 and R79
For this production of The Learned Ladies, the design team wanted to emphasize the sexy side of learning. The concept was to take The Learned Ladies and put it in an "Real Housewives" setting. To that end,  the team wanted to begin the show by depicting the characters using the books, or 'Knowledge,' to make themselves more attractive. Because it was the beginning of the show, there was artistic freedom to take the show into an unrealistic environment. Using high contrast from the side allowed the form of the bodies to exemplify the sexy feeling that the design team wanted to achieve.

Rosco Comments:  Are saturated colors, like R27 and R79 sexy?  Most designers seem to think so.  They are often used in erotically charged dramas (see Tennessee Williams, William Inge, etc.)  But apparently Moliere is not exempt! 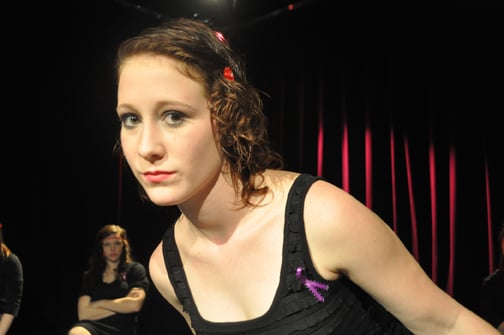 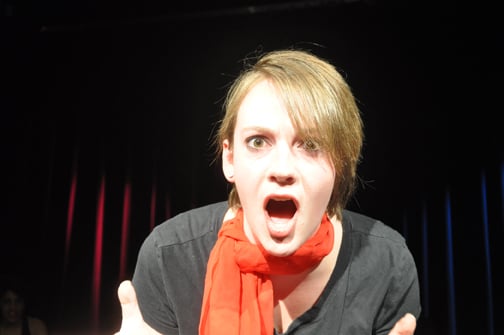 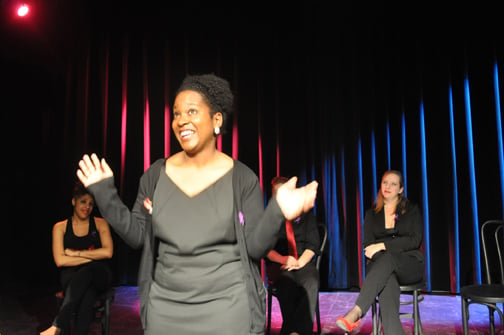 Skyler Broughman writes: After discussing ideas with the director as well as hearing about his visions for the direction of the show he decided he wanted a 'club' feel, with the style that these girls are going up at a big open mic night and sharing their stories. After a some research I came across a stage cross lit, kissing the walls, which were brick in the research. I felt highlighting the curtains would be all the better.I settled on Midnight Blue (#384) due to the slight hint of red in it that would mix well with Light Red (#26). I chose the Light Red due to the slight hint of pink and while I didn't want to use pink heavily, due to the nature of the show I felt that some subtle femininity was important. They were used alternatively, Light Red for the more passionate pieces, Midnight Blue for the lighter ones and I mixed the both during certain more poignant points in the show.

Rosco Comments: A good example of a lighting designer doing it right. She conferred with the director (“he wanted a club feel”), did her research (“I came across a stage, cross lit, kissing the walls.”) and then made color choices based on the director’s vision, her research and, most important, the script of the piece. (“Light Red for the more passionate pieces, Midnight Blue for the lighter ones.”)

When – And How – To Use Plastic Gobos In Your LED Lights