The “Share The Work” initiative, in which we asked lighting designers to send us photos of their work, has yielded an extraordinary outpouring of lighting ideas.  For Part 2, we would like to continue sharing more of this fine work and explore what designers had to say about their color choices. 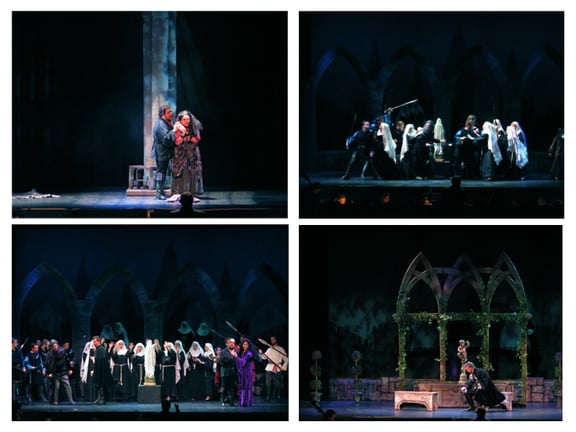 Derek Heckler writes: Il Trovatore is a dark opera that takes place primarily in the evening-night hours. For this, we chose to light the scenes with different saturations and hues of blue through the arc of the show in order to evoke different times of the night. This called for a versatile selection of cool colors which I know Rosco can always provide for me. Colors used included R55, R360, R366, R73, and R74. Using one of these colors alone, or when layered with lighting from other direction and intensity, really provided me with the palette I had envisioned from the beginning.

Rosco Comments: Different shades of blue can evoke different reactions and different times of day … or night.  Five of Il Trovatore’s eight scenes take place outdoors, at night, so a lighting designer needs to draw on many shades of blue to match both the time of night, the location of the action and the mood.  Layering different blue beams over one another offers the additional depth and shadowplay found in nighttime scenes. 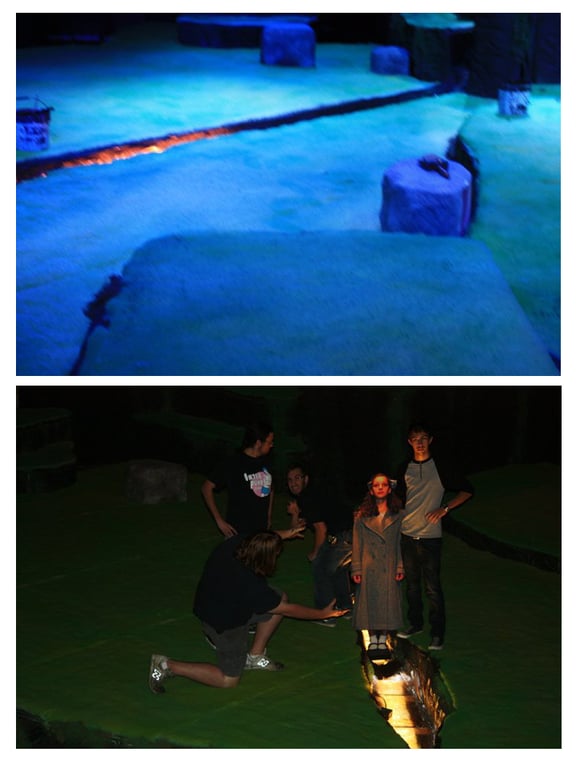 Andrew Michael writes: Production: Women of Lockerbie LD: Andrew Michael Scenic Design: Johnny Pettagrew The look for a "dawn" sequence called for a light to appear from under the stream of water while the women washed the clothes into the water. I needed something that was going to be white light but glow into yellows and golds during the scene. To make this work I used two MR-16 strips and put in R-02, R-09, and R-11 to give the individual glows during the scene.

Rosco Comments: Check out the SED curve for R-11: 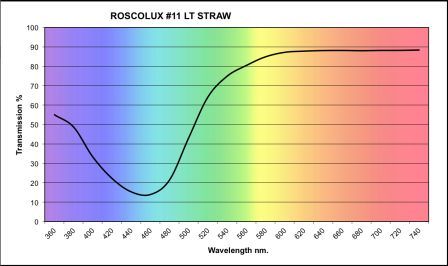 The filter transmits an extraordinary 90% of the yellow wavelengths while blocking nearly all of the violet and blue.  That purity assures a solid yellow “glow” in the resulting light.

Ross McKillop writes: Not the best photo but R99 Chocolate was the choice of general wash for this show - love the warmth it gives without being "sunny" like straw. One of my favourite front light "wash" colours. The FOH rig was very limited for this show, and lower than ideal so it became very "front light" which wasn't the original plan - the only front light colours were R99 and open white. Production: Tether End by Estrado Theatre Company LD Ross McKillop SM Morven Henderson Director Tom McKeown.

Rosco Comments: R99, Chocolate, may sound like an unusual choice for a general wash color, but a number of designers have discovered what Ross McKillop calls its “warmth.” When combined with open white light, it also has the effect of reducing the intensity of the stage light.

We are currently creating a searchable Color Resource Gallery, in which we’ll display the photos and the designers’ narratives we have received, organized by the criteria most designers use when they are doing their pre-design research.  The Gallery will be an excellent tool for designers to see how various Rosco colors look on stage and should be available on the Rosco web site within the next few months.

In the meantime, you can view all the submitted work on this web page: http://www.rosco.com/sharingforswag/entries/

And if you haven't submitted your work yet, do it now and get your Rosco mug!  Details here: http://www.rosco.com/sharingforswag/