Originally from Manila, Philippines, Cha See is a lighting designer for theatre, opera, dance, environmental performances and on-site installations in New York City. She recently worked on a New York Theatre Workshop production of the play Houseplant at the Fourth Street Theater. For reasons that she explains below, her lighting design necessitated a lot of green. Read on to see how she used three different Rosco solutions to create the green light her production needed. 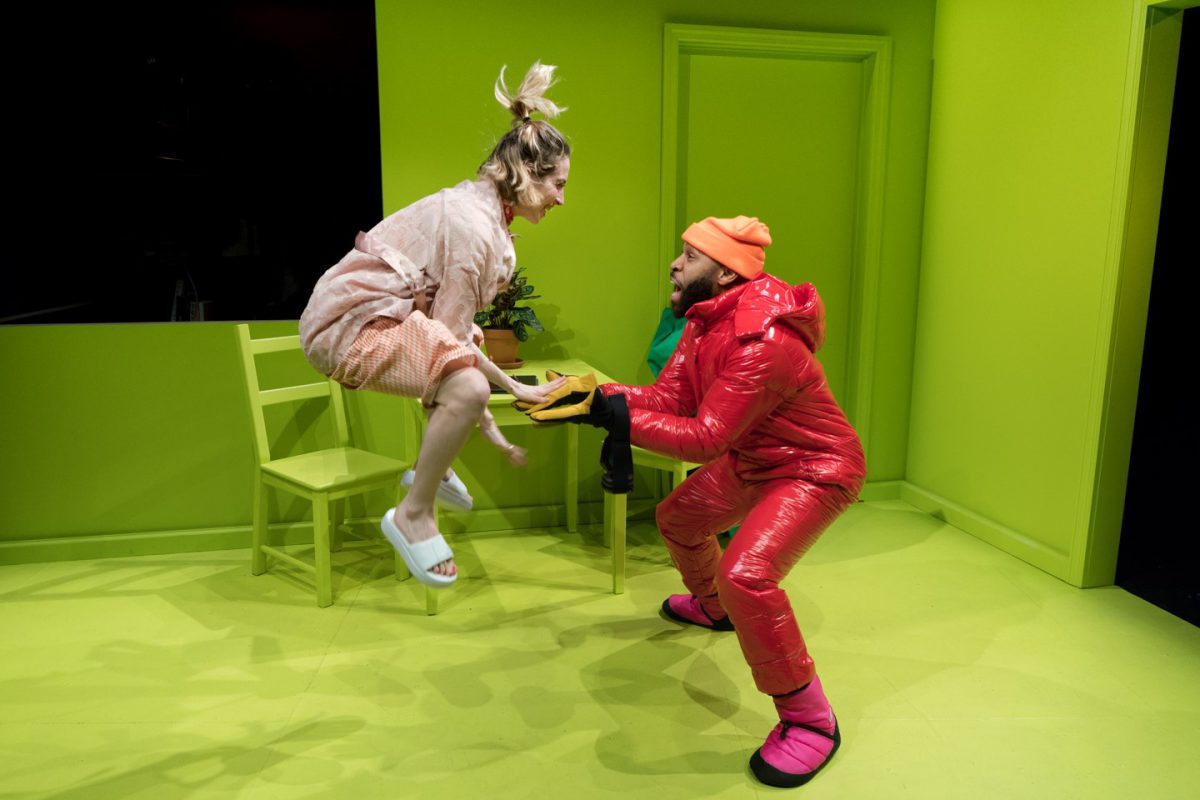 I knew that Houseplant was going to be one tricky show to light right off the bat. When I looked at the set design, I noticed that A.) the set was angled and it was diagonal, B.) there was another level upstage right that was raised three feet off the deck that was also at an angle, and C.) there was this vivid lime color in the paint elevation. How tricky can this be? Ha! 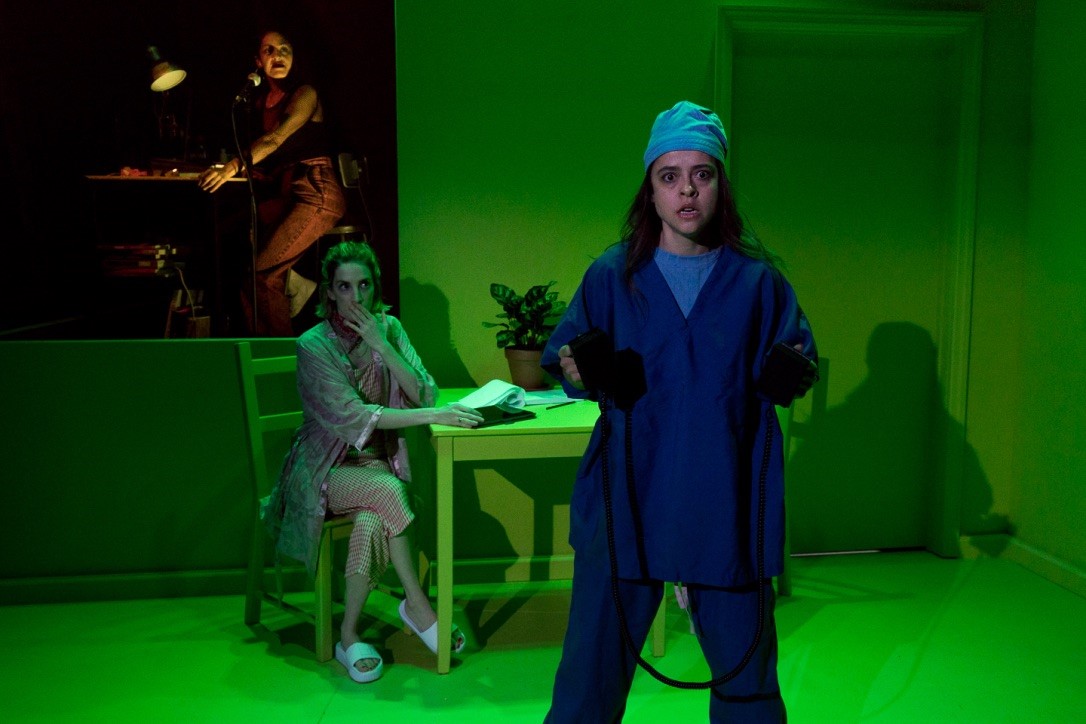 Houseplant was an “NYTW Next Door” production at the Fourth Street Theater in Manhattan, which, if you folks don’t know, doesn’t have much height. The set design and the venue gave me some very exciting challenges: choosing colors that would work well with the costumes on the lime-colored set, how to create some of those colors with color-mixing LEDs, strategizing the footprints of the lighting fixtures in the grid in relation to the height of the set walls, and how to shift my lighting angles depending on what mood the scenes needed. 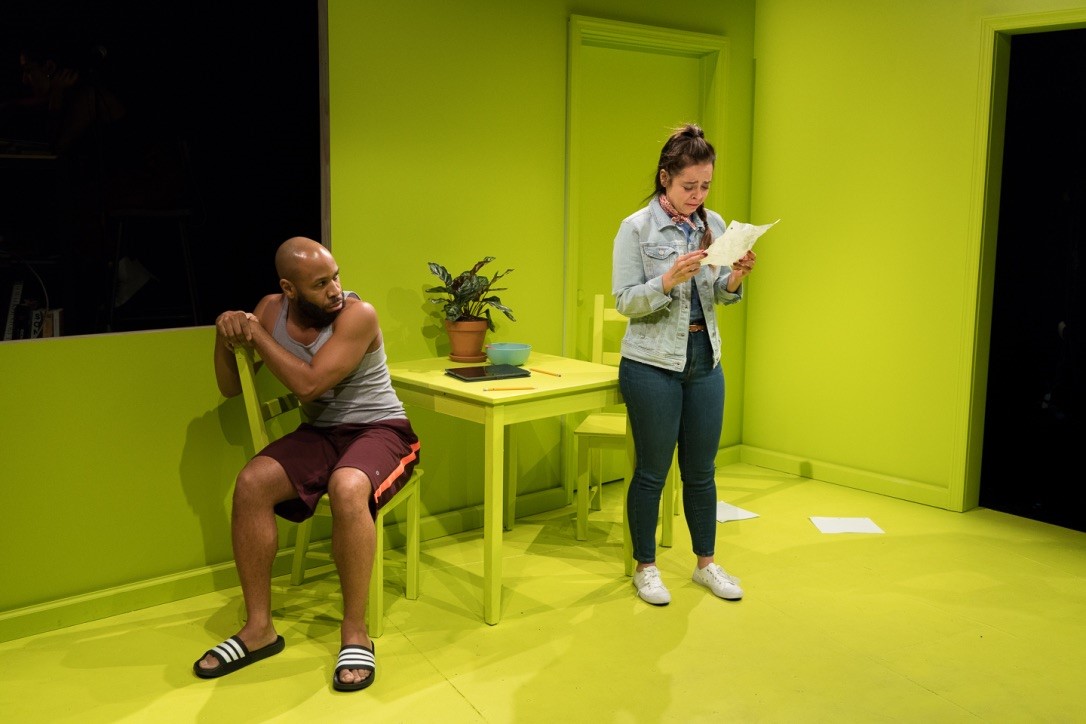 This is where the fun begins! Here is what I ended up doing. I used Rosco 3315 ½ Plusgreen, combined with some R119 Light Hamburg Frost, in my front light system. This made that two-walled lime set pop out more to make it look balanced, and the R119 softened the shadows in the tight space. 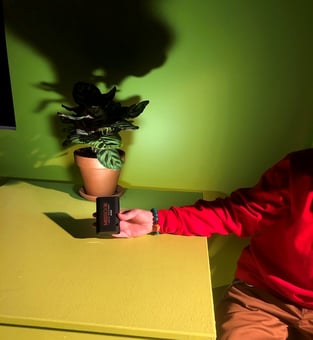 This production was also my first experience putting my new Rosco MIXBOOK™ to work. I wanted the color from the LED fixtures on set to work with my front light color, so I used the MIXBOOK to help my color mixing process. It was not complicated at all. I went on stage and focused the MIXBOOK on the houseplant, then turned on one front light with the R3315. From there, I used the Color Mode of the myMIX™ app to find the matching color with my MIXBOOK. Once I had the proper color, I used the Hue and Saturation levels of that color – displayed in the myMIX app – to program the LED fixtures. Voila! All of the LED tape strips, front lights and the Rosco Miro Cubes up in the grid looked like they were all in conversation with one another!

For angle shift and color changing needs of the show, Rosco Miro Cube® 4C LED fixtures helped me tell the story of my design. The story shifts a lot between reality and emotional spaces of the characters. The dimming and color mixing capabilities of the Miro Cube 4C fixtures fit really well with the demands of the story. I had six of the compact units in the grid. Their small, four-inch, footprint gave me angle options other larger fixtures couldn’t, and their RGBW LEDs gave me a whole gamut of color options – including green! 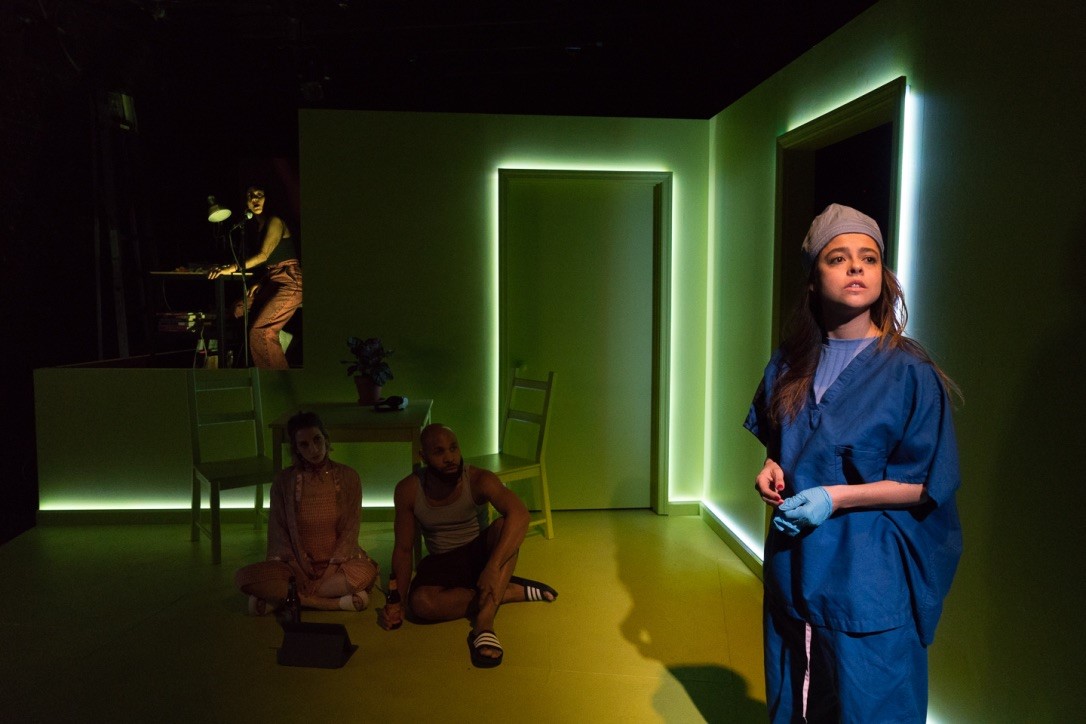 It’s also worth noting that the upstage right platform was especially difficult to light. The compact footprint of the Miro Cubes helped here too. I placed two of the 4C units on the actual platform and hid them upstage of the wall to heighten the story behind the character who is situated on that platform. Houseplant was written by Sarah Einspanier and directed by Jaki Bradley with scenic design by Meredith Ries and costume design by Haydee Antunaño. Set photos courtesy of Elke Young. Cha See is an award-winning lighting designer whose work was recently on display at the 2019 Prague Quadrennial. To see more of her work, please visit her website: seelightingdesign.com.

If you’d like to learn more about the products that Cha See used during her production of Houseplant – click on the images above.

What Is The Perfect Light?