James Mathers has been the director of photography on over 40 feature and made-for-TV films, and has been associated with six TV series from inception through the show’s first season. He is also the president and co-founder of the The Digital Cinema Society, a nonprofit educational cooperative dedicated to the industry’s informed integration of new technology. James recently lensed an independent film that needed versatile, power-efficient lighting – and he found our DMG Lumière MAXI SWITCH filled the production’s needs perfectly.

Ask a Filmmaker of any stature, and they will tell you that they never have enough resources (time, budget, equipment) to devote to any project. It’s certainly true for me shooting Indie features. The demands are great, but the resources are thin, so in this realm it is especially important to pick the right tools for the job. I need dependable equipment that will get the job done quickly and efficiently without compromising image quality. 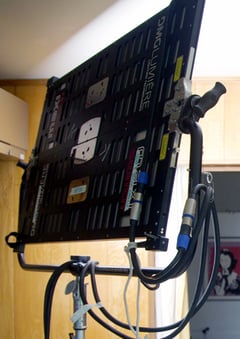 I’ve come to rely on the DMG Lumière MAXI SWITCH light from Rosco. It was really quite indispensable on my last feature, The Windigo, which was shot in the dead of a Michigan winter. The story, set both in the 1800s and present day, revolves around an ancient Native American legend about a spirit that can be conjured up to exact justice for evil deeds when other forms of punishment fail.

The budget dictated a small crew and short schedule, even though the script called for lots of large night exteriors. The latest technology allowed for an approach that would not have been possible a few years back when lighting instruments were not as efficient and cameras not so sensitive. I decided to use only lights that could plug into a 20-amp household circuit (what some affectionately call an “Orange Stinger Job”).

Of course, this would be no sweat on a small set or for a documentary type of production, but as previously mentioned, this shoot called for a number of large night exteriors in the forest. Rather than a dense pine forest where you could just light one row of trees, this is the type of winter forest that had enumerable barren tree trunks visible for hundreds of yards in any direction. Naturally, the director wanted to look in lots of different directions with multiple cameras requiring very little relighting between setups, so it was somewhat a tall order. 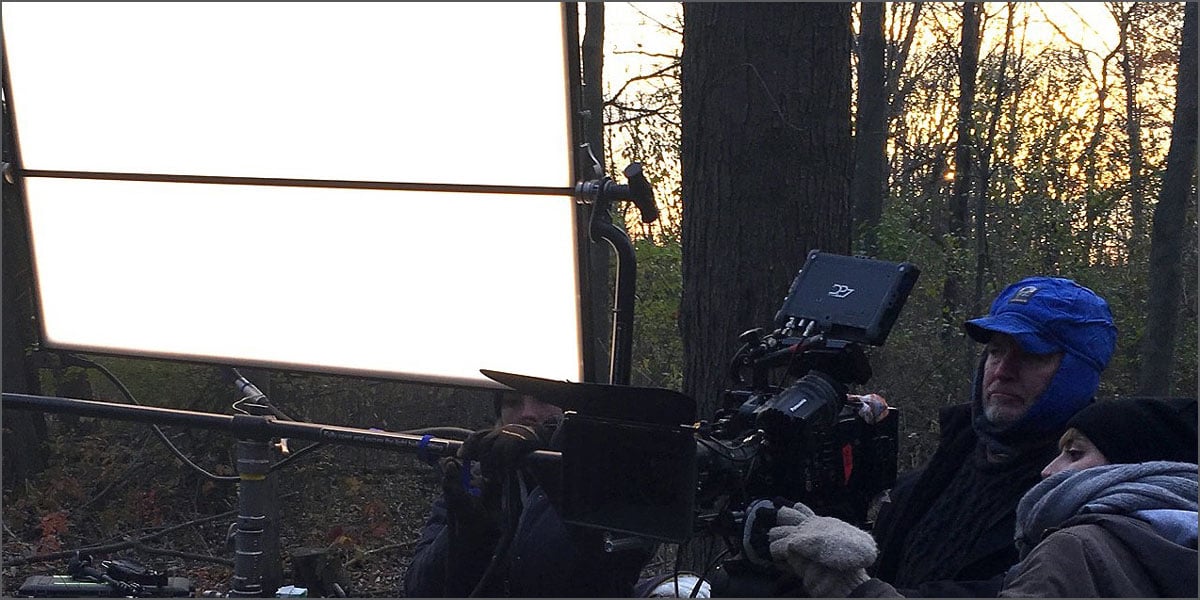 The DMG Lumière MAXI SWITCH allowed me to create a large, soft, bi-color source, with a power draw of only 520W, that was very quick to deploy. It was able to be transported to set in a soft shoulder bag, then folded open into a 3’x4’ panel. Even though the light output from the MAXI SWITCH is very soft, I found it was plenty bright enough to put through a diffusion like a silk or a muslin to make it an even larger source. 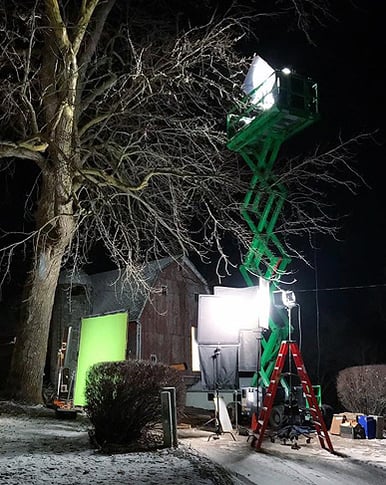 The quality and output of the light was comparable to – but so much easier than – my old approach, which was to bounce one or two Nine-Light Molepar Brutes into a 12’x12’ Griff. That lighting setup took a lot of resources in terms of initial set-up and power consumption (9,000 watts each!), and those rigs are extremely hard to move in and out of position. Hardly an appropriate technique for a small crew on a short schedule. I always like to play my fill a little warmer than my edge and backlights, and trying to control color on such large heat generating units as 9K Brutes can be very difficult. Gels have to be large enough to be mounted a safe distance from the lights in order not to burn, and of course, it adds a whole other layer of grip gear. With the bi-color MAXI SWITCH, on the other hand, changing the color temperature is easily accomplished with the turn of a dial. For these nighttime exteriors, I balanced both the camera and the MAXI SWITCH to 4500K and let the pair of 1.8K HMIs I had on a lift above the tree line play at their native 5500K. This setup resulted with a cool back edge to create depth in the background that avoided needing correction gels altogether.

The MAXI SWITCH is also bright enough to use as daylight fill, reducing shadow in full sun and it was often deployed to extend the shooting day when we were losing the light. The fixture enabled us to quickly adjust the color temperature to match the setting sun’s Kelvin shift, which was a real lifesaver. 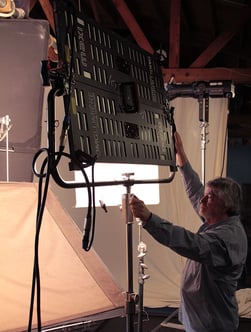 Not only was the MAXI SWITCH dependable and rugged enough to withstand the elements of rain, snow, and at times, fierce winds, we also found it quite useful for several of the interior shots. Since there were a lot of practical light sources on the sets, I needed to balance for tungsten. I warmed up the MAXI SWITCH, dimmed it way down and put its light through a 6’x6’ muslin. Even though it creates a large source, the extremely thin profile of the MAXI SWITCH allowed it to fit into relatively tight spaces.

This is a light that has earned its way onto my regular lighting package. I don’t think I’ll shoot another movie without it.

If you’d like to learn more about the tools and techniques James Mathers used to shoot The Windigo, be sure to read his behind-the-scenes article on digitalcinemasociety.org.

If you’d like to learn more about the versatile LED soft light James used to illuminate several of the scenes in this indie feature – visit the MAXI SWITCH product page on the DMG Lumière by Rosco website.

L.A. Sentimental Expressing the Mood of City Hall with Color