A Modern Lighting Solution For A Modernist Masterpiece

Miesian Plaza is an office complex built over three blocks in the heart of Dublin's Central Business District. Originally serving as the headquarters for the Bank of Ireland for many years, the building is considered Dublin’s finest example of the Modernist style made popular by architect Ludwig Mies van der Rohe. In an effort to bring the vacated building back to life and preserve its architectural heritage, the complex recently underwent a €69MM redevelopment. Miesian Plaza has since become one of Dublin’s most iconic construction projects – and we’re honoured that Rosco Custom LitePads played a role in the building’s illumination.

The complex was originally designed by Ronnie Tallon of Scott Tallon Walker Architects and was constructed in two phases during the 1960s and 1970s. It was only fitting that the firm – which is well-known for designing, building and renovating some of the Ireland’s most emblematic buildings – would be chosen to handle its redevelopment. The project included upgrades to meet today’s energy-efficiency requirements and strived to secure the highest sustainability credentials. At the same time, the architects needed to consider that Miesian Plaza is one of the few 20th century buildings in Europe to have protected structure status. That meant that while they brought the buildings up to modern energy consumption standards, they would also need to preserve the structures’ unique and historic aesthetics at the same time. 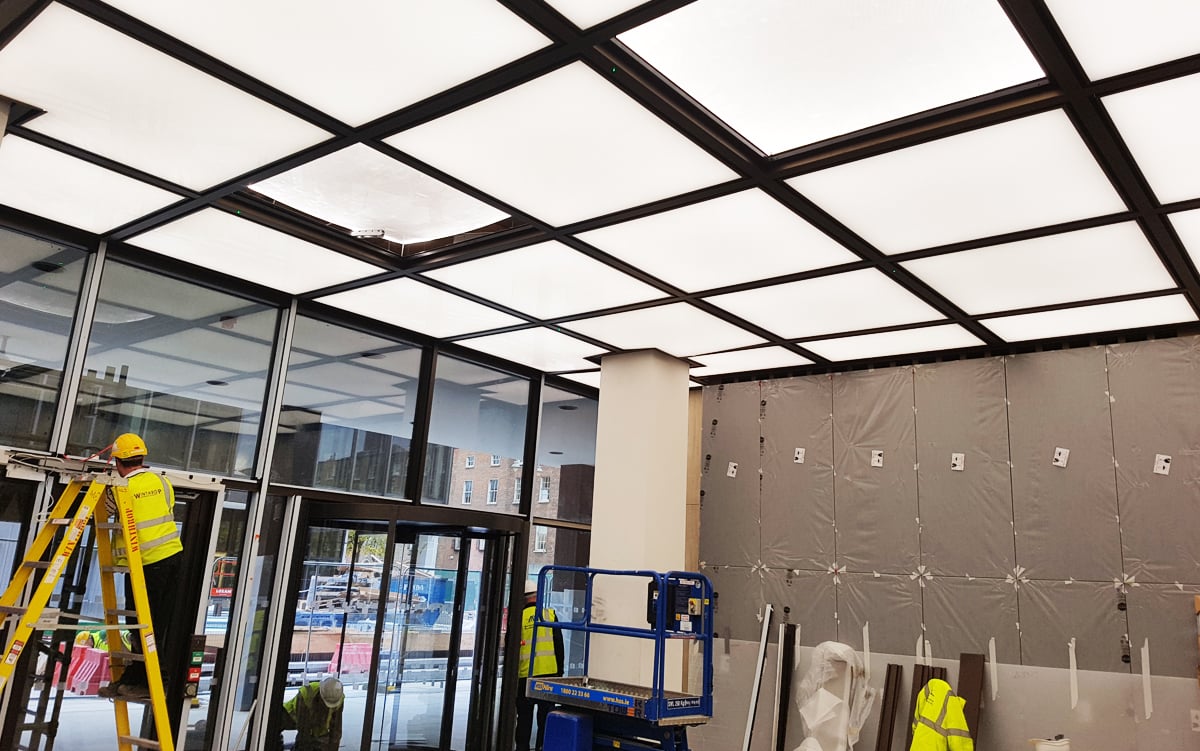 Installing the Custom LitePads into a rectilinear grid in the ceiling. Photo: Mark Reilly, Arup-Ireland

Architects at Scott Tallon Walker, working in collaboration with lighting designers from Arup – Ireland, decided that Rosco Custom LitePad HO90 met both of these requirements and specified over 30 of the 4000K fixtures to create a Miesian-inspired ceiling structure inside the main reception area of Block 3. Rosco LitePads satisfied the lighting design’s need for a source that was energy efficient and generated an even light output. The large square and rectangular LitePad modules also fulfilled the architectural needs of the Modernist, Miesian aesthetic and were installed inside a bronze anodized aluminium frame to match the bronze cladding of the façade. 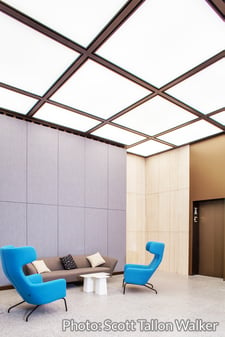 Rosco LitePads are edge-lit LED panels that are engineered to produce attractive, soft light output. The fixtures feature a unique etch-pattern that ensures even illumination across the panel.

Ronan Phelan, the Director of Scott Tallon Walker, said that the Custom LitePad’s “uniform, diffuse lighting creates a bright and welcoming interior for office workers and visitors alike in an office lobby that has limited access to natural daylight. The dimmable LED source provided a sustainable and flexible solution to the creation of a luminous ceiling in a bespoke architectural design.”

The slim-profile nature of the 8mm thick LitePads makes them easy to install inside building renovations or new construction.

Mark Reilly, Senior Engineer at Arup-Ireland, highlighted the same qualities of Rosco Custom LitePad HO90 on the project: “The design brief included for an illuminated ceiling within an existing building where it was critical that the lighting could be calculated and the products could be customised to the space requirements of the area. Visually, the lighting output required a high level of uniformity to achieve the required look and feel aspiration required.”

We are thrilled that Scott Tallon Walker and Arup-Ireland chose to integrate Rosco Custom LitePads into the bespoke ceiling design of Miesian Plaza. If you have an upcoming project that needs attractively bright and even ceiling illumination, visit the Rosco Custom LitePad product page to determine which easy-to-install LitePad will work best.

Modern Lighting Inside An Historic Building At HTV Houston

A Modern Haunted Effect With A Vintage Touch