When bands put together dates and venues for their tours, a number of performances end up landing at outdoor music festivals. This was the case for the punk/experimental rock band Pierce the Veil and their “Made To Destroy” Tour. The set & lighting depended on a hazy atmosphere in the air to create the show’s aesthetic. While the hazers in the rig created this atmosphere fine indoors – it was all lost in the wind once the band took the stage at the outdoor venues. Jason Reberski from JR Lighting Design, Inc. (the gear-provider for the US leg of the tour) explains how he helped solve this problem using a Vapour Plus Fog Machine and our Rosco Fog Fluid.

After a few tour stops at outdoor festivals the request came for “more atmosphere” from Lighting Designer Jeff Maker and Touring Lighting Technician Mark “Chud” Williams for these outdoor tour dates. Jason, having worked with Rosco Fog Machines for his entire career, knew that the solution for creating haze outside was to make fog… lots and lots of fog.

Luckily, JR Lighting Design, Inc. has Rosco Vapour Plus Fog Machines in its rental inventory. Jason knew that the Vapour Plus was designed specifically to quickly make massive amounts of fog, which makes it the perfect solution for creating atmosphere in outdoor venues. He knew that not only could the machine make plenty of atmosphere for the large, outdoor stages – it could also replace the atmosphere quickly if-and-when the wind would carry it all away. Jason explains, “Initially the thought was that the Vapour Plus would sit at Front Of House with a fan in an effort to disperse more haze out into the crowd area at these festival dates, however it ended up being used on stage and re-positioned by Mark “Chud” Williams during the performances. We were pleasantly surprised that this singular machine was creating such great atmosphere on stage. The machine’s low-end control and its high-output both contributed to the success of managing the atmospherics successfully.”

The machine is only half of the equation though. Jason also knew that, in order to make effective fog/haze outdoors, the fluid you use needs to be pervasive enough to hold together in the elements. That’s why he suggested both the Vapour Plus Fog Machine combined with Rosco’s original Fog Fluid formula to create the atmospheric haze for Pierce the Veil’s outdoor performances. “There is something special about Rosco’s original Fog Fluid,” notes Jason. “First of all, its distinctive aroma – you can always identify ‘that Rosco Fog smell’ from a mile away. Second, and perhaps most importantly, its high index of refraction and the long hang-time of the fog it produces allows for a more economical use of the fluid as well as a great looking effect!”

The machine was shipped directly to the tour a few weeks in where it was put immediately into service and worked flawlessly throughout the run. Jason further expands, “The Rosco Vapour Plus machines have been robust additions to our touring/production rental inventory and continue to perform very well for our customers. We expect to see many more years of reliable service from them.”

When asked for his advice on creating effective outdoor atmospheric effects, Jason replied: “work WITH the wind, don’t fight it.” The Pierce the Veil stage crew moved the compact & lightweight Vapour Plus around the stage from show-to-show so that any airflow that was present would move the atmosphere across the stage – not off the stage. The tour was recently written up in a Lighting and Sound America article where Jason specifically explains how he used the Rosco fog machine and fluid: “[Pierce the Veil had] a single Rosco Vapour Plus fog machine that was added a quarter of the way through the US portion of the tour. The extreme density and long hang-time of the standard Rosco Fog Fluid used in the Vapour Plus machine was key for the outdoor festival dates, for creating excellent atmosphere.” 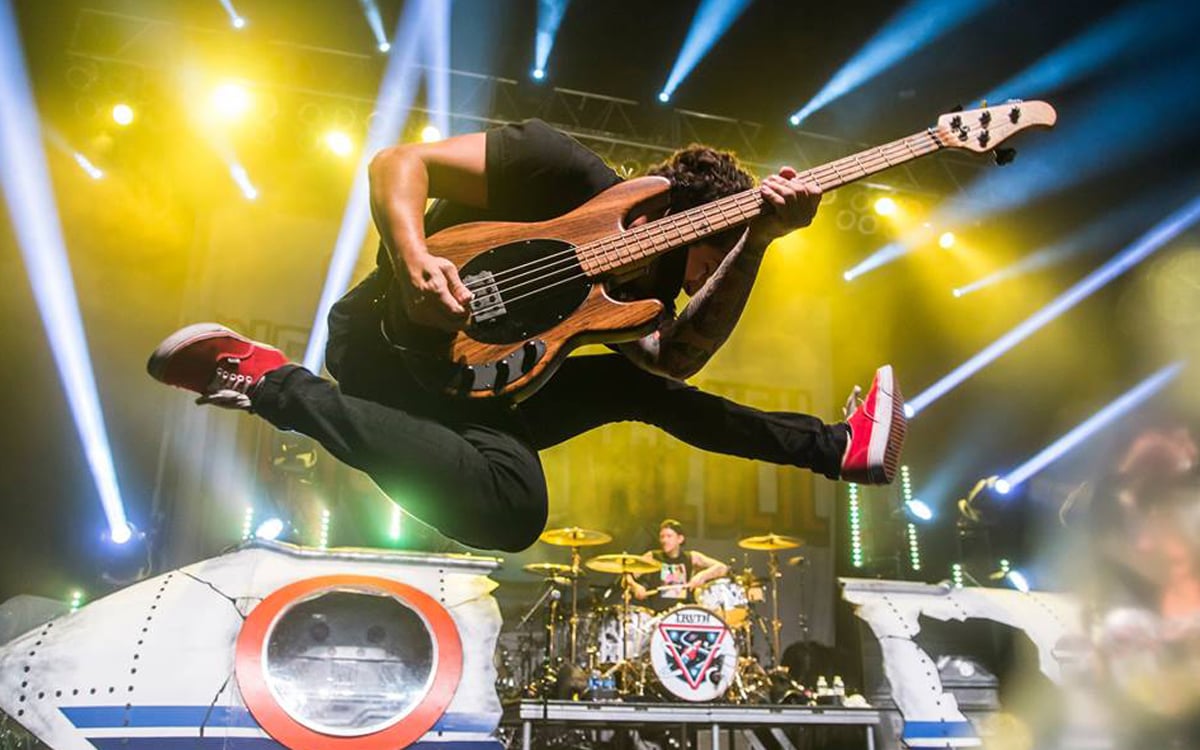 Pierce the Veil performing at Chill On The Hill. Photo Credit: Dylan Dulberg

Thanks to Authorized Rosco Dealer JR Lighting Design, Inc. for sharing their story and for stocking Rosco fog & haze machines and fluids in their rental and sales inventories. Visit jrlightingdesign.com to see their full inventory of lighting & atmospheric equipment. You can also explore the Vapour Plus product page and the Rosco Fluid product page to learn more about the Rosco fog products used on Pierce the Veil’s “Made To Destroy” Tour – or click here to learn about our full range of Vapour Fog & Haze machines.