Neal Preston is a world renowned music photographer who has portrayed almost every rock legend of the past four decades. He has accompanied many iconic personalities on their tours and captured some of the greatest rock moments - on and off stage – with his camera. Artists including: Janis Joplin, Fleetwood Mac, David Bowie, Bruce Springsteen, Pink Floyd, Queen, The Rolling Stones, Bob Marley and Tina Turner are amongst Neal’s impressive collection.

As Led Zeppelin’s Robert Plant once said of Neal’s work: “whenever I see Neal shooting from the pit, I know his eye, I know he’ll be in the right place and when I see the photo later it will often feel just like it felt to me onstage – except larger, with an echo of sound and fury”. 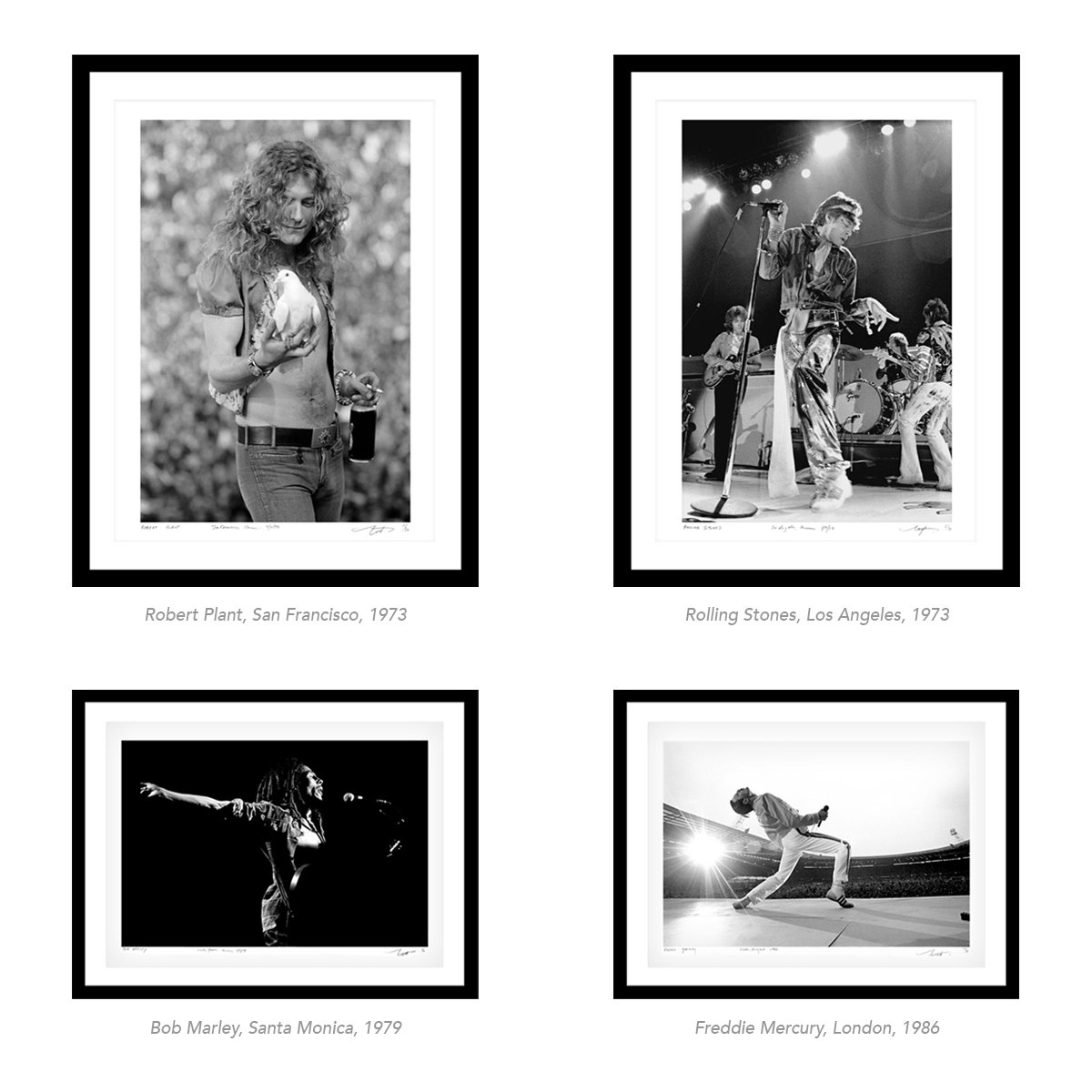 Thanks to the touring exhibition “Neal Preston – In the Eye of the Rock’n’Roll Hurricane,” visitors get to view several of Neal’s iconic photographs and experience the “echoes of sound and fury” that Plant described. Originally organised by Rosco’s dealer Lightpower, the exhibit has attracted a large number of enthusiastic visitors in Las Vegas, Stockholm, at the Montreux Jazz Festival, and at the Musikmesse Frankfurt Fair.

Art Director Andreas Witt’s concept for lighting the photographs included a glowing background with each photograph illuminated by its own spotlight. Witt discovered Rosco’s VariWhite RoscoLED Tape and not only found that it could be easily mounted and adapted for touring, but its high output made it the perfect choice for the backlit walls.

Witt describes his concept: “The idea was to have lighted walls, changing from a warm to a cold white, to create a special ambient in the exhibition area, while the pictures from Neal are still spotlighted via a ETC Mini Gallery Version. After some tests at the Lightpower Studio it was the first choice to use the Rosco VariWhite Roscoled Tape. Impressed by the quality of binning and output, we did the first big show in Frankfurt at the Musikmesse with about 1000 m2 and wall heights of 3,80 m!” The results provide a dynamic experience of Preston's photography. As a viewer approaches an image, it may be backlit in warm light that transitions into cool after a short time. It's interesting to note how the visual impact of the photograph shifts as the backlighting fades from cool to warm.

More than 500m of VariWhite RoscoLED tape was used for the Musikmesse Frankfurt fair, which was then adapted and reused for other exhibitions. In order to make the exhibit more touring friendly, however, Witt explains how changes needed to be made. “Early in 2016 we decided to use a new wall system with a height of 3m to be prepared for smaller venues and gave the walls a luxury touch. After replacing the used tape from the cooling aluminum base we were very happy to use more than 90% again for the new system. Now the tape is mounted in single custom units with different lengths and 30 degree optical lenses with a custom made cable system, ready to tour with the Rock’n’Roll Hurricane.”

At the time of this article, the “Neal Preston – In the Eye of the Rock’n’Roll Hurricane” exhibit is on display at the Gütersloh Theater. For this installation, Witt added an additional 75 m of Rosco’s color-mixing VariColor RoscoLED Tape to create a new display in the windows. “At the Theater in Gütersloh we had a huge display of about 40 m long glass window front. The backdrop of the wall system has a big print on a backlit fabric showing parts of the hurricane. 36 custom made lightboxes are hanging in front of the print, each lightbox showing a song title from the bands or artists of Neal’s pictures. The boxes are lit up from inside with 1,5m VariColor RoscoLED Tape and are DMX addressable. A custom control board in each box is in a 3 channel version using red, blue and cold white. The color quality and the output is amazing! 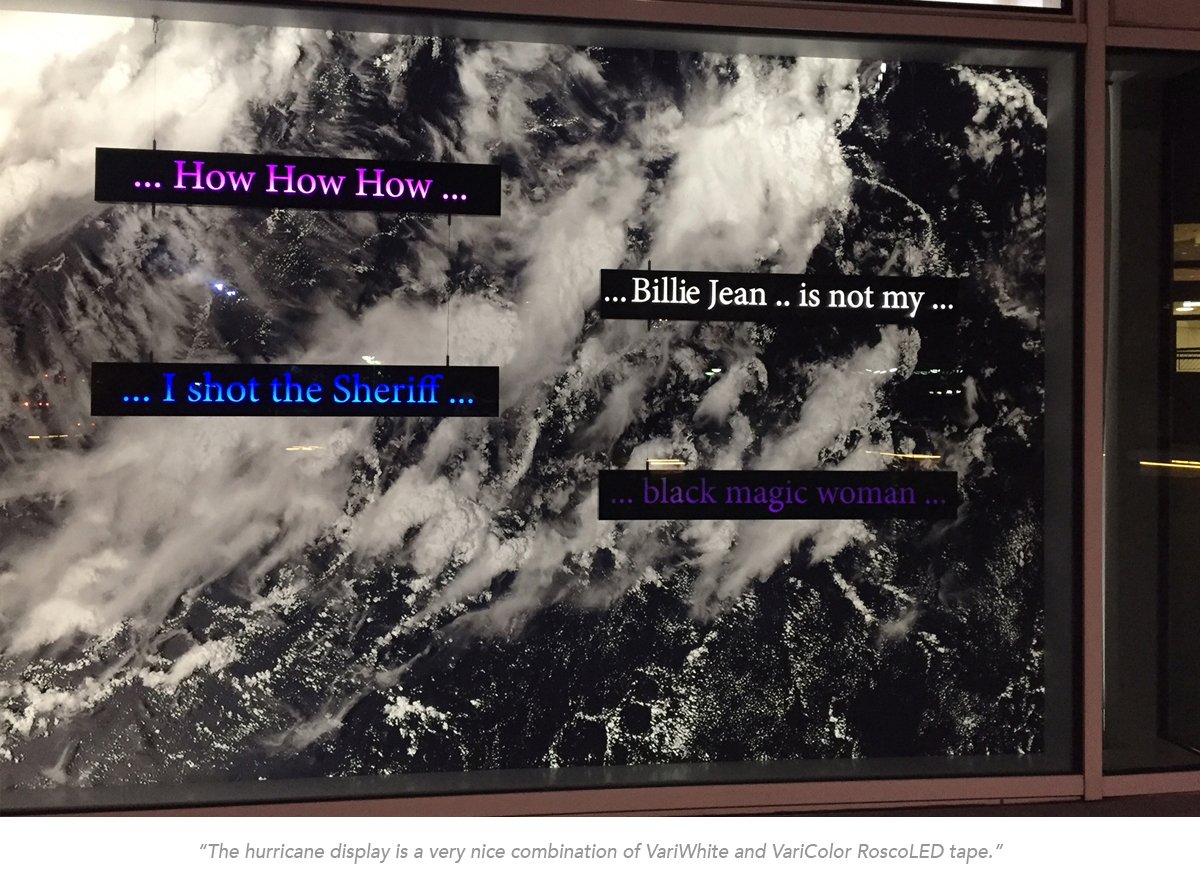 “We are very happy and pleased with Rosco and a special thanks to Matthias "Matze" Bohnenpoll (Rosco’s Account Manager - Germany, Austria & Switzerland ) for his support.” 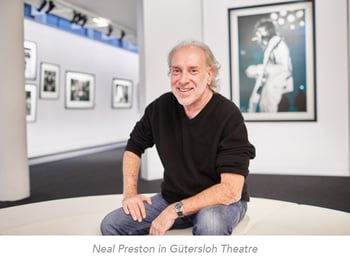 Lightpower Collection is donating all income from the exhibition at Gütersloh Theatre to the Behind the Scenes charity. This organisation provides financial support to entertainment technology professionals who experience hardship when they become ill or injured, or to their surviving family members. Rosco is thrilled to have collaborated in this exhibition in its longstanding effort to support the efforts of Behind the Scenes. To see more of Neal Preston's iconic images - be sure to visit lightpower-collection.com.

Unflatten Your Food Photography With Backlight