El Parque Fluvial Padre Renato Poblete (Father Renato Poblete River Park) is a public park located in Santiago, Chile that was renovated to recover the banks of the Mapocho River and form a calm lagoon that would permit a variety of water activities. To keep the aqua them going at night, designers sought to create a wave lighting effect throughout the park.

Video showing the plan of the park

The lighting design for the park was conceptualized by DIAV to integrate into the park’s geometry. Using the Mapocho River as the central reference, different lighting zones were created for each area in order to create a unique experience that would promote the new qualities of the park and its connection to the water. A perfect example of this concept is the water-themed "wave lighting effect" DIAV envisioned to illuminate the pedestrian walkway that runs alongside the lagoon inside the middle of the park. 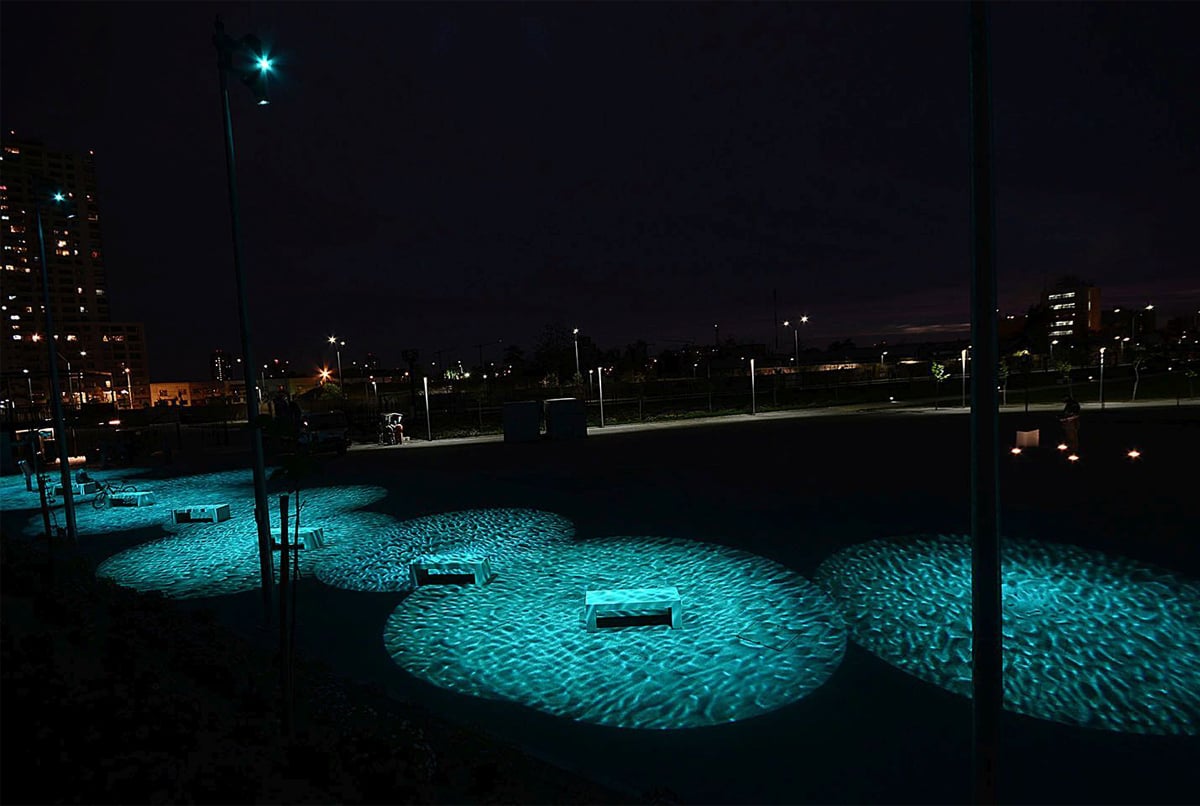 DIAV’s concept for this particular zone was to project a blue, rippled light effect that would mimic the water of the nearby lagoon. Valook S.A., Rosco’s dealer in Chile, together with the installation company Brotec Construcción Ltda, initially tested several different types of Rosco ColorWaves to find the desired effect. The design team fell in love with texture of our Cyan Sparkelite ColorWave, but the colour was not quite what they were looking for. Because the dichroic coating is placed on the textured side of the glass, a ColorWave is engineered to produce several vibrant colour shifts throughout its image area. The DIAV designers didn’t want any colour-shifts – they wanted that Sparkelite texture in a solid cyan hue. 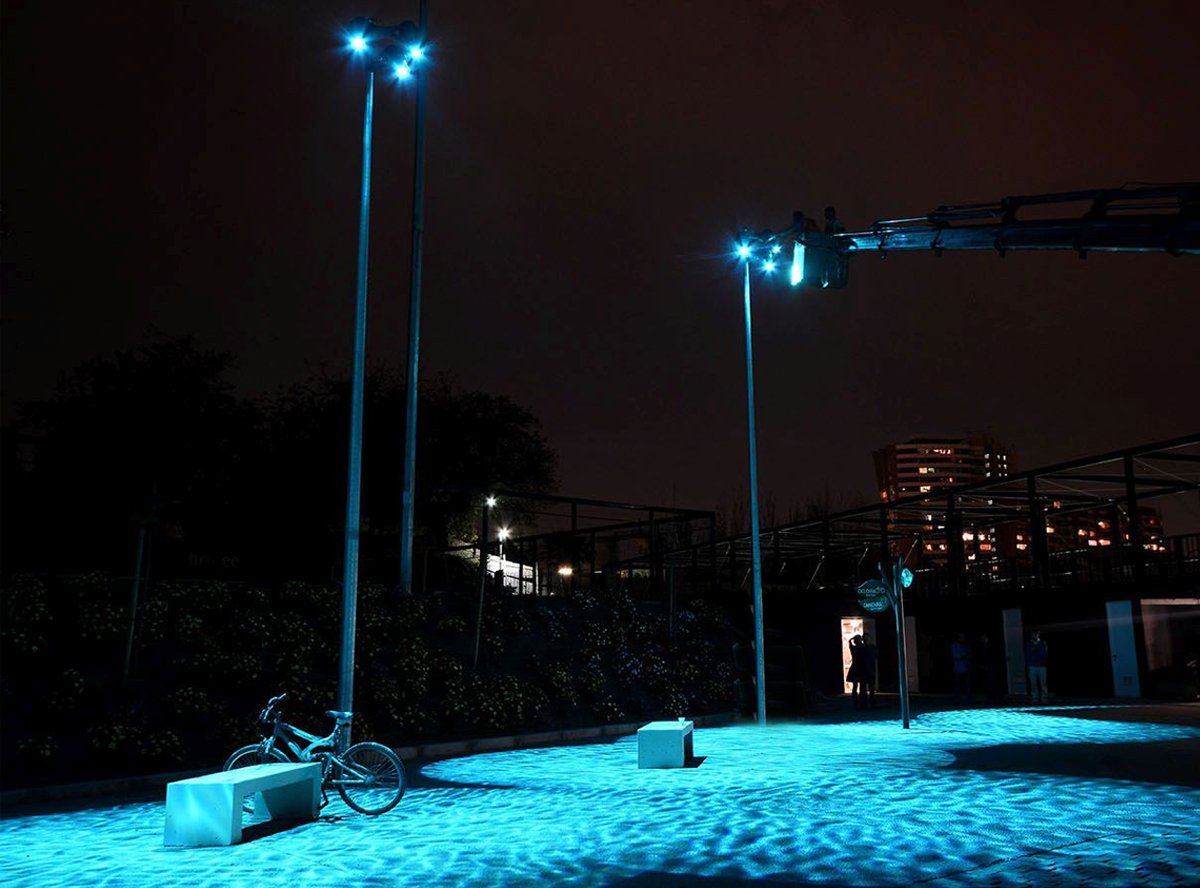 The next idea was to use the non-coloured Sparkelite Image Glass gobos to achieve the desired texture and combine it with a piece of our Permacolor Dichroic Glass #5700 Sea Blue for the colour. The lights DIAV chose to work with, however, were Philips UrbanScene fixtures, which only had one A-sized gobo slot. 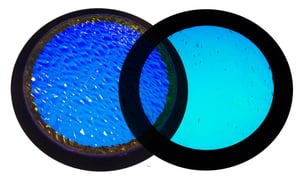 With only one gobo slot to work with, Valook collaborated with Rosco to provide the solution: gluing 100mm round pieces of the Permacolor 5700 Sea Blue onto the back of the A-size Sparkelite Image Glass gobos. This produced the desired effect – a perfect rippling texture in a solid Sea Blue (or should we say - Lagoon Blue) to create their wave lighting effect. 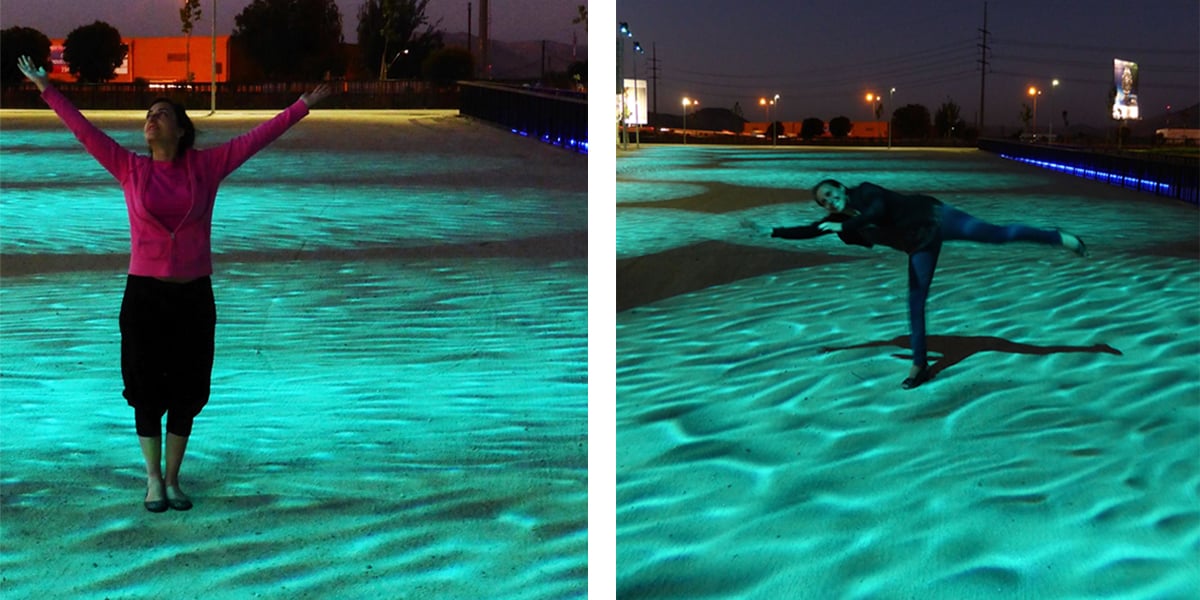 The pedestrian walkway is bathed nightly in vivid sea blue waves thanks to the 56 gobo/dichro combinations projected onto the ground below. We, along with our Valook partners, were thrilled to help the designers make the park an attractive, safe space for people to enjoy, while at the same time highlight the importance of the Mapocho River and its relationship with the city.

Captivating RoscoVIEWs From Around The World