When ETC launched their new, cool-running, Source 4WRD LED retrofit endcap, we witnessed a whole new interest in using plastic gobos. As more and more facilities contemplate upgrading their fixtures to LEDs, we’ve been getting calls and emails wondering how those fixtures work with gobos – particularly whether or not the fixture can use plastic gobos. In the case of the Source 4WRD, the answer is yes! Below are some of our findings on how our Cool Ink Plastic Gobos performed vs a standard print-at-home transparency inside a fixture with the Tungsten Source 4WRD endcap installed.

One of the major upsides of LED gobo projectors that people talk about is how they can print their own gobos. While it may be tempting – here are the results we captured during a recent test with the ETC Source 4WRD (NOTE: these results are not exclusive to the Source 4WRD. We’ve seen similar results with several other LED gobo projectors on the market as well). The image started fading within seconds of going into the unit - particularly the blacks. The projected image you see was taken as quickly as possible after insertion. Note the browning blacks around the image, not to mention the faded colors and the distortion of the image itself.

More than likely, you'll also notice a “starfield” effect in the black area. This is due to the uneven way the ink adheres to standard, off-the-shelf transparency film and can't be helped. The transparency also wrinkled terribly upon removal from fixture, rendering it completely useless and non-reusable.

Not only was the original projection substandard – non-true black, poor image resolution, etc – but, it didn’t last inside the Source 4WRD very long at all. Notice the bubbling and warping of the transparency after only being in the fixture for 20 minutes.

It may take a little more time and money than printing a gobo yourself, but making those investments in our Cool Ink Gobo technology will yield a much better projection. First of all, our Cool Ink Gobos are printed on Rosco’s proprietary film, which yields smoother, more consistent blacks (bye-bye "starfield" effect), better adhesion between the ink and the plastic, and much better image-resolution. Plus, the printed image is mounted in a plastic bezel that makes it easier to insert into a gobo holder, and the bezel keeps the plastic taut to help it resist warping in the heat.

If you’re looking for even better image-resolution and heat-resistance, consider ordering one of our Cool Ink HD Gobos. This process begins by printing the image on our proprietary film, then adds in our unique masking technique that produces opaque blacks and superior image-resolution. The image is then sandwiched between two pieces of heat-deflecting glass and mounted in a metal bezel, which improves the gobo’s ability to resist image distortion due to warping caused by heat. The glass also has the added benefit of making the plastic gobo cleanable – now you can remove those pesky finger prints from your projection.

Sometimes, plastic gobos aren’t the answer at all. While the image-resolution of Cool Ink HD is better than any other plastic gobo available, it still might not be good enough. We are the only gobo manufacturer that makes our own dichroic glass, which means we have complete control of the colors rendered. This results in superb art replication and fine detailed projection. The dichroic glass also ensures non-fading permanency and extreme heat-resistance. Many LED fixtures still generate a sizeable amount of heat and cannot take plastic gobos – making glass gobos your only option for projection of full-color imagery. Check with the fixture manufacturer or call Rosco to see if your fixture can take a plastic gobo. 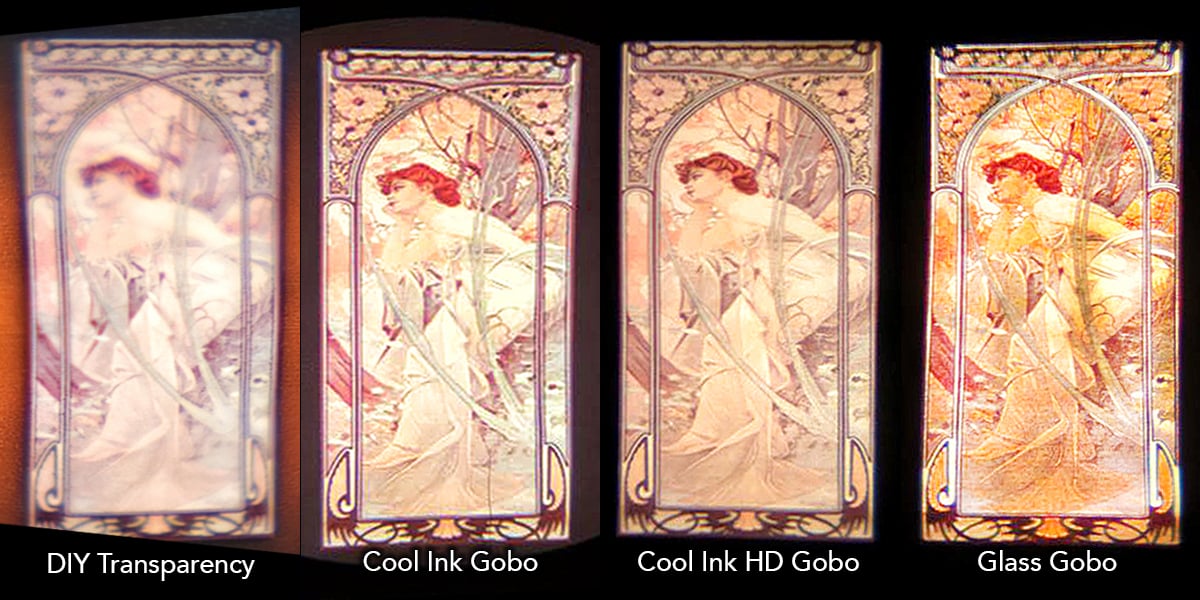 When we launched our Cool Ink Gobos back in 2012, we pointed out how Rosco has been in the plastic gobo business since 2001 thanks to our iPro Image Projector! Now, with four years of manufacturing Cool Ink and Cool Ink HD gobos under our belts, we’ve continued to improve plastic gobo technology! Put that experience to work for you. We know there are times when you absolutely have to make your own gobo. But, when time and budget allow – don’t do it yourself. Order a Cool Ink or Cool Ink HD Gobo instead.

When – And How – To Use Plastic Gobos In Your LED Lights