Black Light Effects - They're Not Just for Halloween Anymore 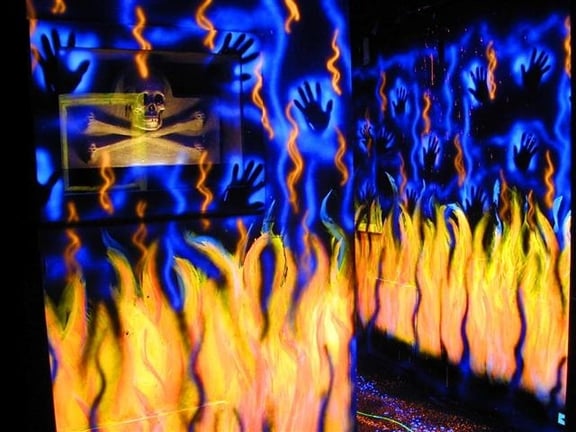 Tis the season for haunted houses, spooky mazes and Halloween parties. No doubt, if you partake in any of the above, you'll probably experience at least one black light effect. We covered what makes good black light in a previous Spectrum post. Now, we'll illustrate how, thanks to the LED black light technology found in Rosco's Miro Cube UV, designers are empowered to use black light in ways they never could before.

Sometimes a design needs an area to glow as if it were back lit, but the constraints of the set or the facility either prevent the necessary power or the lighting fixtures themselves from getting installed properly to make a back lit effect happen. 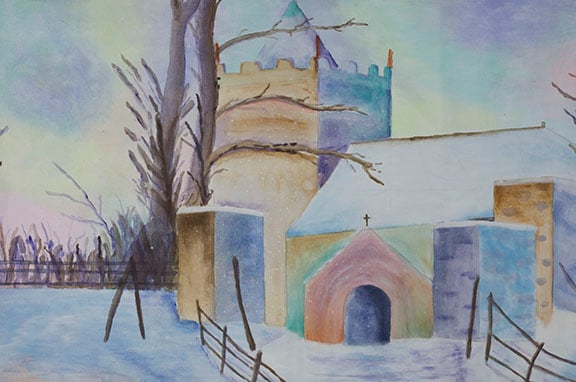 A church in winter, front lit, with fluorescent highlights in the sky.

The sky in the scenic drop above was painted with muted Rosco Fluorescent Paints that were let down and combined with some Off Broadway colors. Under standard lighting conditions, the scene looks serene and pastel with some colorful highlights in the sky. 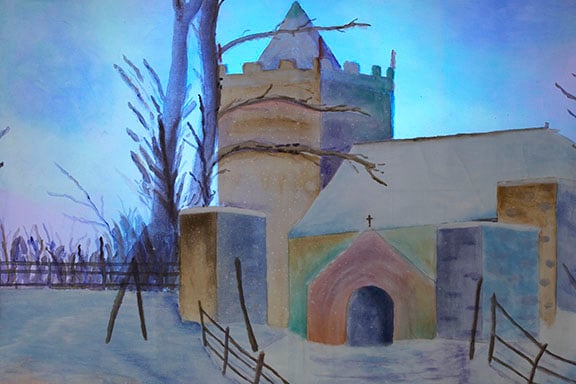 Adding UV to the front light makes the sky glow as if it were back lit.

When the drop is lit with UV, however, the sky areas glow as if they were being back lit. Thanks to the power of the Miro Cube UV, this is effective even in areas with high ambient lighting. In fact, the designers at Emphasis Lighting put this technique to good use in a recent installation at the Legoland Discovery Center in Chicago. 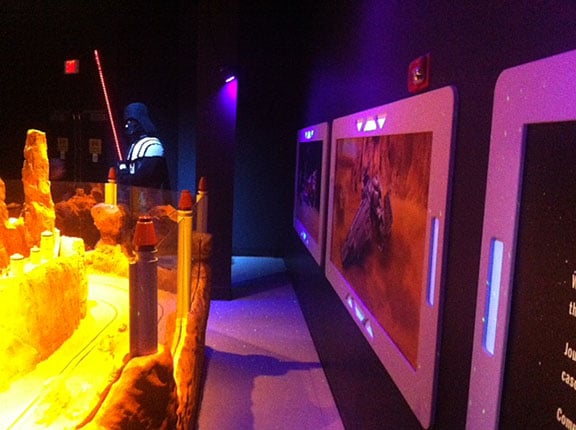 There are no lights in the frames back lighting the glowing shapes - it's all front lit UV.

Most of the darker areas of the Lego Star Wars exhibit were lit with T5 fluorescent black light bulbs, but the designers were challenged with fluorescing the frames of the Star Wars themed art work that were hung in the well-lit retail areas. They chose Rosco's Miro Cube UV to punch through the bright lights of the store and make the fluorescent areas of the frame glow as if they were back lit.

Back Lighting with Black Light

Another technique now available to designers is to actually back light scenery with UV. This gives designers the ability to change the look, feel or time of day simply by adding black light to the back of the scene. 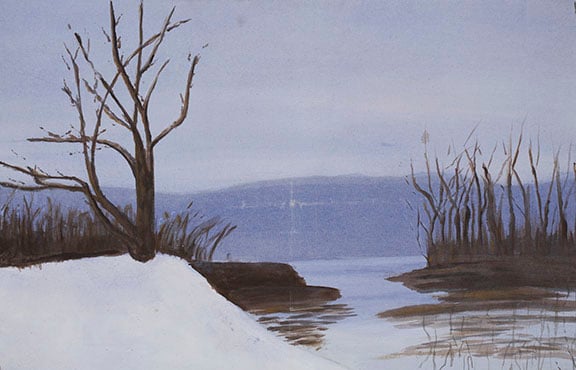 The painting above, when lit from the front, is a serene, winter lake scene with a cool daytime sky. However, the scenic artist added streaks of fluorescent pink and orange Vivid FX Paint to the back of the drop. 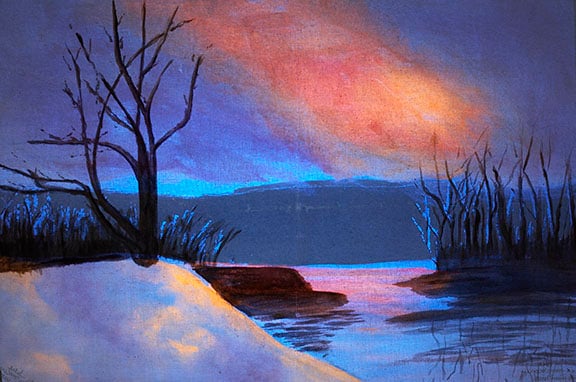 The Miro UV makes the fluorescent colors painted on the back glow through to the front.

Once the Miro UV bathes the back of the drop in copious amounts of fluorescent-exciting UV, the pink and orange areas glow bright enough to be seen from the front - quickly and easily changing the daytime scene into sunrise or sunset. Thanks to the scenic artists at the University of North Carolina School of the Arts for providing the scenic drops featured in this post.

The intensity of the sunset effect can be varied by controlling the amount of front light.

The fact that the Miro Cube is a compact, 2.5 pound, 4 inch cube means that it easily installs behind scenery or in the ceiling. Every unit comes with its own set of spread lenses that adapts the beam spread of the fixture for any throw distance - long or short. Miro Cubes have built-in DMX and on-board controls to generate the proper amount of UV needed for your next black light effect.

The Miro UV gives designers a black light fixture that they can install and control anywhere - including long throws from a theatrical grid, areas with higher ambient lighting or even back lighting set-pieces. Now you can put black light effects to use in theatrical productions, retail spaces, museum exhibits and, yes - even haunted houses on Halloween.