Shine a Light on Autism with Rosco Color Filters

April 2nd is World Autism Awareness Day, which kicks off World Autism Awareness Week. Seeing that our blog is called 'Spectrum' and that cities and landmarks all over the world will be lit up blue for Autism Speaks' global Light It Up Blue campaign - we thought it would be a good idea to use our social media outlets to help raise awareness of the Autism Spectrum. We've joined forces with Autism Speaks to provide global solutions for those that want to change their exterior lights and Light It Up Blue!

For those of you that frequent Rosco Spectrum, you might remember a previous post entitled Spectrum Wavelengths: Something Borrowed, Something Blue that highlighted Autism Speaks and Light It Up Blue. The goal of the campaign is to raise autism awareness of the campaign by lighting up buildings, icons and landmarks in cities all over the world blue on the evening of April 2nd, which is World Autism Awareness Day. Hopefully, by lighting up more buildings and landmarks blue this year, autism awareness will be raised to help increase understanding and acceptance of individuals with autism.

For the past several years, the operations staff at Autism Speaks has been recommending two of our filters - R80 and R68 - to facilities managers and lighting supervisors all over the world to change the illumination of their building or landmark blue. These filters have become the official gel colors of the Light It Up Blue campaign.

Why blue? What does the color blue have to do with the autistic spectrum? The answer is that Autism Spectrum Disorders are almost 5 times more common among boys than among girls. So, the color blue represents the boys diagnosed with Autism.

How did Autism Speaks decide on Roscolux 80 & 68 as the colors they recommended, and why are there two? As the campaign was beginning to get off the ground, the staff at HOK Lighting in St. Louis took the Light It Up Blue concept to some of the clients they had worked with to illuminate the exterior of their buildings, and they convinced them to change the color of the light shining on their buildings to blue. In order to make it as easy as possible – the professionals at HOK Lighting recommended that their clients choose either Roscolux #80 for spaces with brighter lights or more reflective, light-colored buildings and Roscolux #68 for spaces with lower intensity light fixtures or less reflective, darker buildings. This easy recommendation got back to the national organizers for Autism Speaks and they began sharing HOK’s R80/R68 specification as a part of the How To Light It Up Blue section of their website. Having two, specific products to suggest made it easier for the Autism Speaks team to convince buildings and landmarks to light themselves up blue on World Autism Awareness Day. 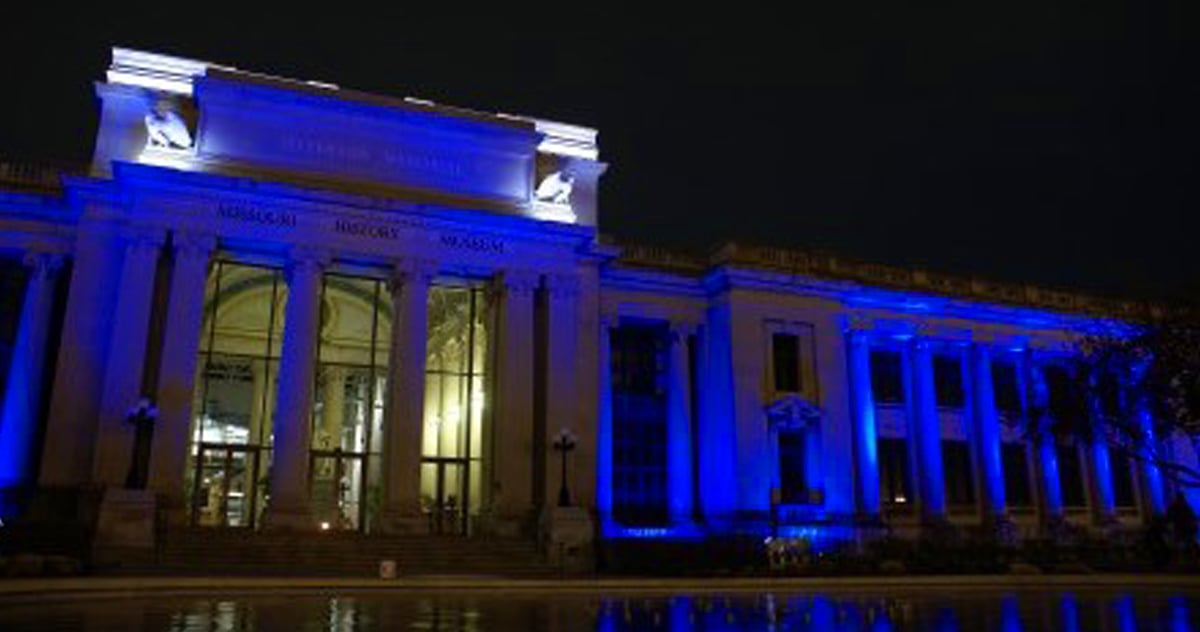 The Missouri History Museum lit up blue thanks to HOK Lighting in St. Louis

Now that there was an easy Roscolux recommendation, the organizers of Autism Speaks reached out to us to find a way to streamline the purchase of the filters. They needed a centralized location that they could share with people looking for solutions to turn their lights blue and wanted a place where their supporters could easily find & buy the proper Roscolux colors. Because we don't sell on our website, we partnered up with our friends at Barbizon to provide the online-sales support Autism Speaks needed to get blue Roscolux filters shipped all over the world and we also built a dedicated Light It Up Blue with Rosco Filters web page: www.rosco.com/liub.

An interesting development of the new relationship between Autism Speaks and Rosco is that the campaign organizers learned all about Rosco Gobos! There are many times that the regional directors have a location interested in supporting the Autism Speaks cause; the organization would like to participate but can't commit to changing the lighting scheme of their building or landmark blue. The solution is a custom gobo that they can project on their structure like they did on the Flagler Memorial Bridge that connects the city of Palm Beach with West Palm Beach in Florida. 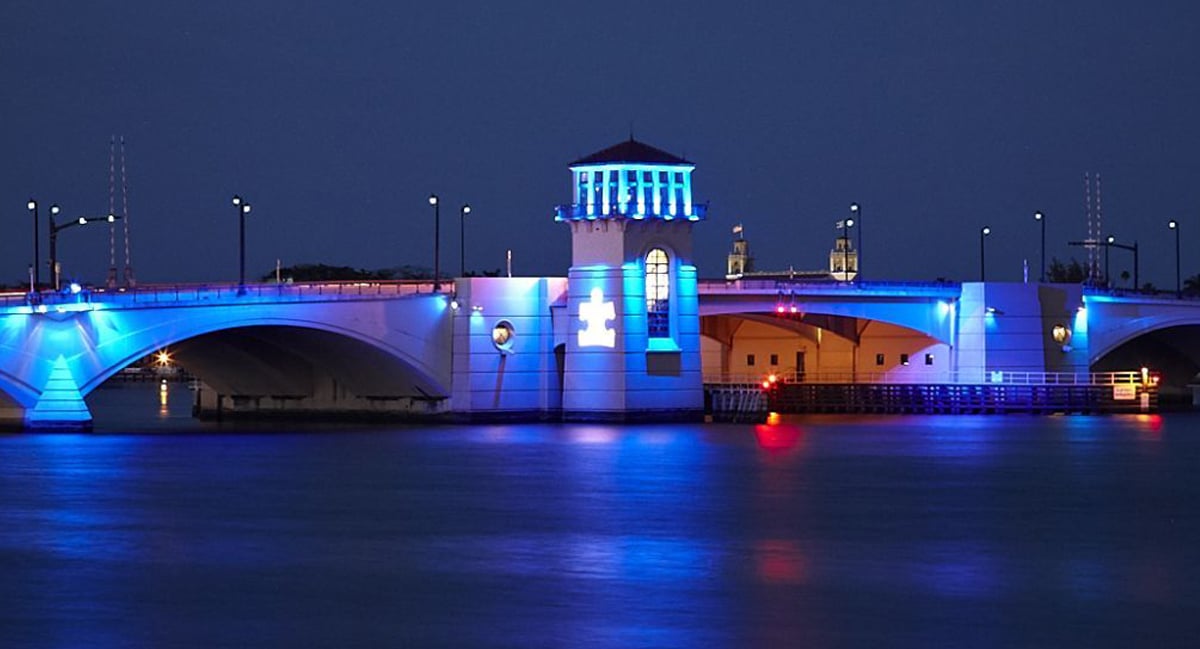 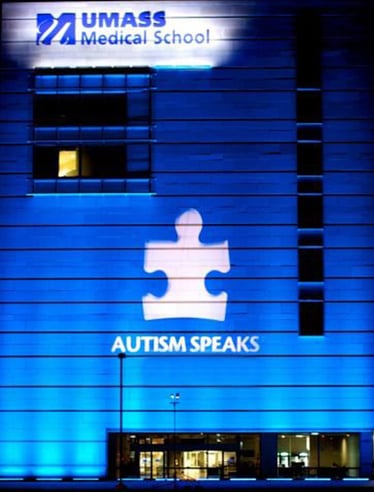 Another technique for illuminating your office blue, without manipulating the color of a building's exterior lighting, is to add R80 to the windows from the inside. Roscolux 80 is sold in 48"x25' rolls, which is wide enough to cover most windows. Simply cut the filter to size and tape it to your window for the week. Now you and your office mates can make an impact simply by leaving the the lights on inside to Light It Up Blue to the passersby outside. 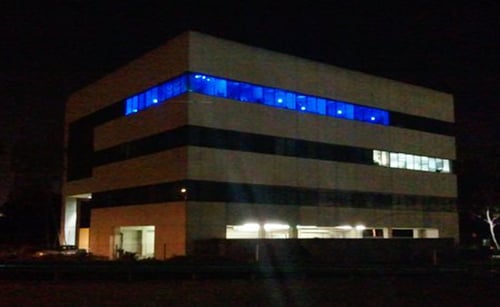 Luckily, the folks over at HOK chose two of our most popular filters - so chances are good that your Local Rosco Dealer  has sheets of both of these filters in stock for you to put on your lights. If you post pictures of your building lit up in Rosco Blue to Facebook - be sure to tag Rosco in them so that we can see the good work you've done.

We are excited to be a part of Light It Up Blue and look forward to growing the relationship with Autism Speaks in the coming years. Together - we can all help shine a light on autism.

A Blueprint For Successful UV Effects