Spectrum Elements: Pink for the Cure! 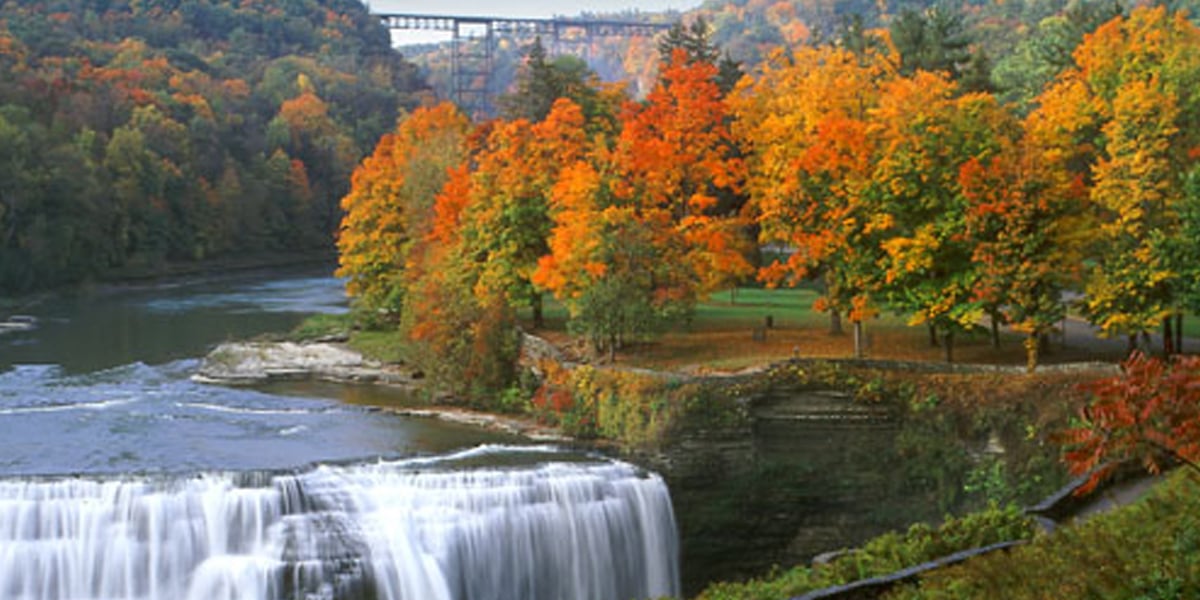 As October begins, the world around us begins to take on all sorts of vibrant colors - yellows, ambers, deep reds & oranges... and pink - lots and lots of pink will be seen throughout city skylines and on people's houses.

Throughout the month of October, individuals and institutions across the country will begin to search for ways to turn their lights pink, which means lots of sheets and rolls of pink gel heading out of the Rosco warehouses for the next few weeks. Our phones have already started ringing with people asking what’s the right Roscolux color to use. 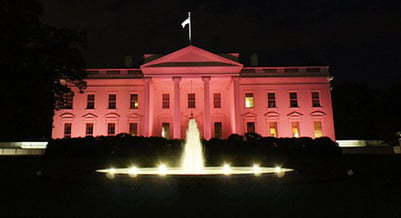 There are a number of factors that influence what "the right pink" is, including: the spectral output of the light source you're working with, the hue of the pink you want and whether or not the gel can survive when installed on the light source.

Most lights used to illuminate buildings are either metal halide or sodium vapor. The metal halide makes a 'white light' that has spikes in the blue and the green, while the sodium vapor fixtures are very yellow and also have a high green spike. Remember, a color filter cannot put color into a light source that it doesn't already contain. So, if the light source you're working with doesn't have the colors in its spectral output to make pink in the first place, installing a pink color filter on the light won't work.

In general, you'll have the most luck working with metal halide as that particular source has more colors present in its spectral output, so it should yield a decent pink. 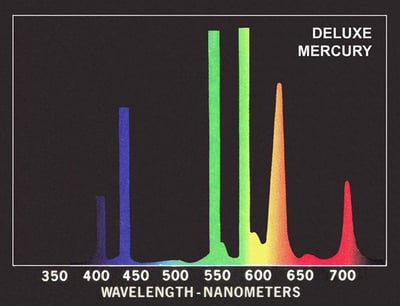 Sodium Vapor, on the other hand, has very few other colors in its spectral output - really the only colors of light it makes is yellow and green, so getting a decent, rich pink out of it may be more difficult. 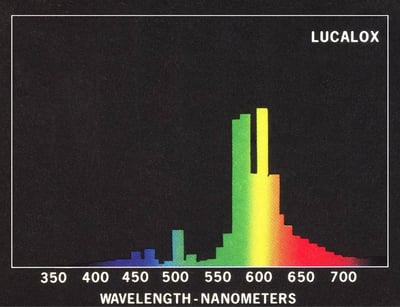 There are several different manufacturers of both metal halide and sodium vapor lamps, which means that the spectral outputs of both can vary greatly depending on the actual lamp you're working with. It's always best to take your Roscolux swatch book outside at night with you and hold it up to your eye while you look at the source to see what colors might work. Once you have a short list of favorites, go buy a test sheet or two of the ones you think might work and experiment with them on the fixture. Not only will this help you confirm your color choice, but it will also help you determine whether or not the gel will survive in front of your light source. Roscolux filters were manufactured to hold up to a lot of heat, however some industrial fixtures can produce high amounts of UV or IR that might cause the gel to fail/fade/melt quickly. It's better to learn that a plastic filter won't hold up on your lights by sacrificing one sheet of gel before you've bought several rolls to cover all of your lights.

Note: If you are having gel failure, you can investigate Rosco's Protective Filters to place in-between the light and the gel to help the color filter last longer.

Last year, Norcostco had a lot of success selling Roscolux filters to various institutions around the Twin Cities. They have two Roscolux suggestions that they offer their customers who wanted to put gel on the lights illuminating their buildings: 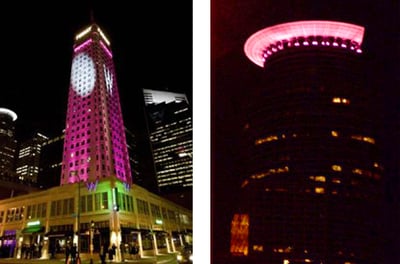 L: The W at the Foshay Tower    R: The Halo Atop the Capella Tower

L: Cantebury Downs    R: The sign outside The Hartford building

Norcostco also shared how Park Nicollet Medical Centers used LEDs to wash their building in pink, but that they used an R71064 Cancer Awareness Ribbon Gobo inside a Source 4 with R43 to turn the ribbon pink: 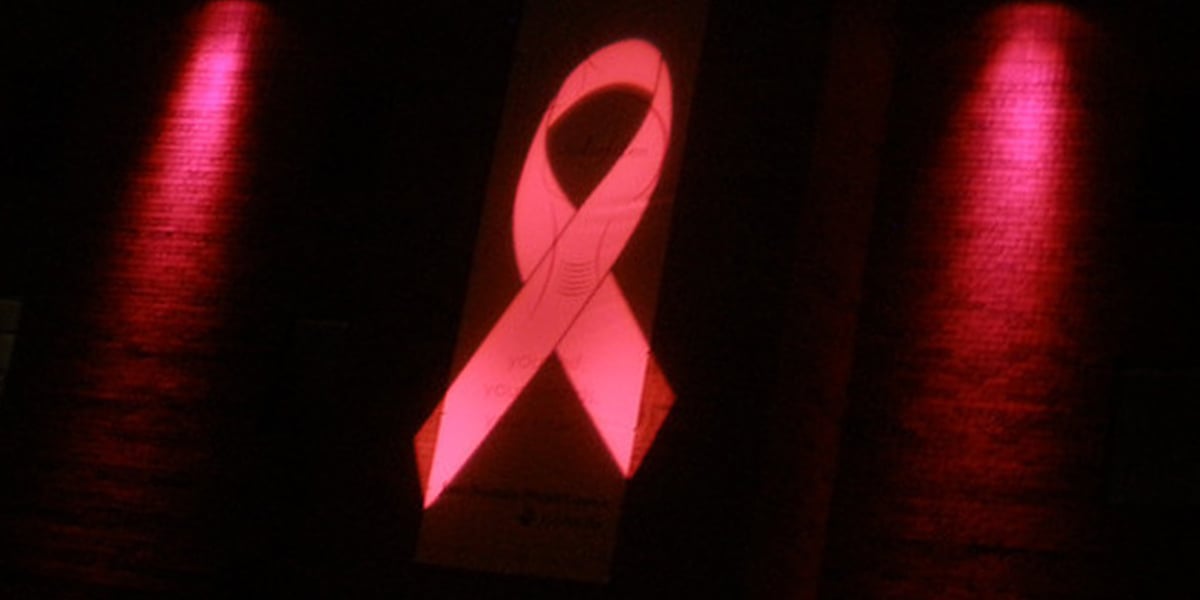 My personal favorite was the R346 used on the Basilica of St. Mary: 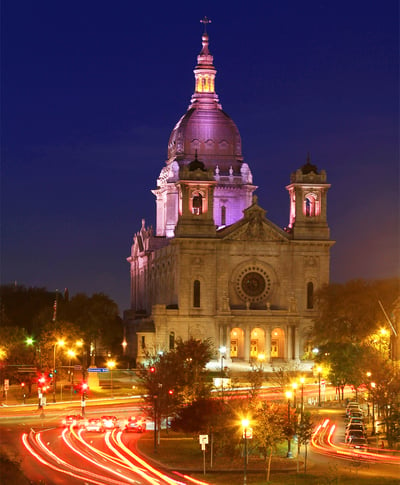 The National Breast Cancer Awareness Month Campaign has inspired thousands of people to light their homes, businesses and civic institutions pink in an effort to raise awareness of their mission for early screening to cure breast cancer. Speaking for everyone at Rosco, especially those of us that have been affected in one way or another by this disease, I know we are honored every time a Roscolux pink is chosen to Light It Up Pink For The Cure! If you, or your organization, uses Roscolux pink filters to light up your building pink, please be sure to tag @rosco_labs in any photos you post to social media - we'd love to see them.

How Rosco Fog Turns The Berry Into Scary At Knott's

Bring The Location To You With Rosco Backdrop Solutions