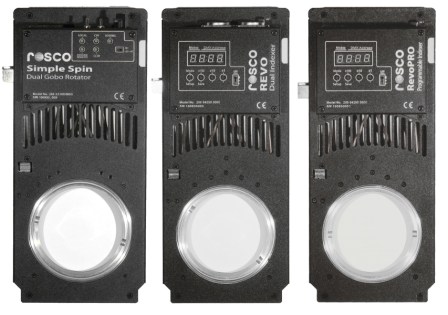 Whether a design calls for rotating a logo at a corporate event, the shadow of a fan blade turning through special-effects haze in the latest blockbuster or undulation within a foliage break-up to make it look like a breeze is blowing through the trees on a theatrical stage, a gobo rotator is the simplest and most affordable way to create those effects.

Over the years, we have received requests on the features a gobo rotator should have in order to be useful from multiple different markets. All of that feedback is reflected in the stunningly large array of features in Rosco's new BeltDriveFX range of gobo rotators: The Simple Spin, REVO and RevoPRO 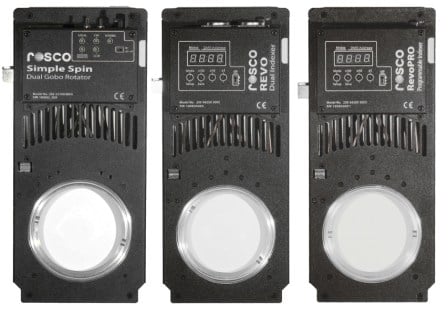 Some features are common to all of the rotators and some are unique to the individual rotator. The BeltDriveFX range of rotators presents a solution for every customer in every market.

Here are some of the features we developed for our new range of rotators that are universal to the entire BeltDriveFX range: 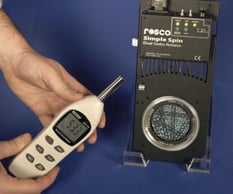 No one wants to hear the unit work - especially smaller venues, churches and broadcast facilities. Even at its fastest speeds, the new BeltDriveFX rotators are quiet enough for the most sound-sensitive installations.

Tired of your rotator sliding around in the iris slot as your focusing? This feature helps keep the rotator locked in place.

Never lose another spring clip again! The collar accommodates gobos as thin as steel (or plastic) and as thick as glass gobos, like our Prismatics; plus the collar threads down tight to keep the gobo from slipping/turning inside the rotator.

Each of the three rotators were created with a certain user or market in mind and the feature-set of each unit was tailored to its respective use or venue. 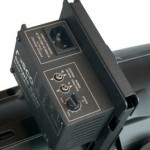 If your production or event just needs to rotate some gobos for a dance scene or nightclub effect, then the Simple Spin is the right choice. This double gobo rotator has on-board speed and direction controls for local control, or with a flick of a switch, you can control it from your lighting board by plugging it into a dimmer. The Simple Spin has an internal 100-240v transformer and electronic controls vs electric controls, meaning that it will work all over the globe. Instead of the voltage directly controlling the speed of the motor, the controls inside the Simple Spin detect the voltage and tell the rotator how fast to rotate. This means having more control over the speed of the rotator (1/3 – 24 RPM) and ensures reliability - no matter how slow and subtle or fast and erratic you want the effect to be. 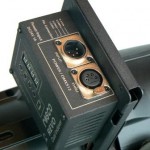 Finally, a gobo rotator that has been designed to operate the same way the rotators inside moving lights do. Until now, the gobo rotators available for ellipsoidals have been completely different - notably in effect capability, motor type and programmability - than the rotators in moving lights. The REVO is manufactured using two stepper motors, like the motors found in moving lights, providing not only superior durability, but the ability to create dynamic effects by individually controlling each motor separately. Additionally, the 8 bit or 16 bit DMX control over the rotators enables individual indexing of both rotators and it comes with seven different programming modes, so that no matter what moving light you might be pairing with it, you can set the REVO so that you can program it the same way. Moving lights have provided lighting designers and programmers the luxury of individual, indexed control and now they can expect the same from the REVO, which uses the same 24v PSU technology our I-Cue and other theatrical accessories necessitate. 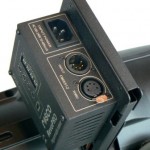 The RevoPRO was designed for use in a theatrical or live-event environment via DMX OR in a non-DMX, stand-alone installation. Powered by an internal 100-240v transformer, the RevoPRO can operate anywhere in the world and it also has 8 bit or 16 bit DMX control over each motor enabling individual indexing of both rotators with seven different programming modes. Due to its 99 pre-programmed effects and the ability to program the unit using its on-board, easy-to-use, LCD controls, the PRO in RevoPRO stands for Programmable. This becomes incredibly handy when you want to rotate a gobo in a retail environment or a special event where there is no DMX present. It also becomes helpful for theatrical venues that can use it on stage during one production and then out in the lobby to help promote the next production.

Rosco's new BeltDriveFX Gobo Rotators offer a huge array of features: silent operation, threaded Teflon collars, channel lock, electronic controls and stepper motors with individual indexed control to name a few. However, the number one piece of feedback we receive about rotators is that they need to be affordable. Even though we packed them full of desirable features, we also took great steps to make the rotators the most affordable in their class and ended up with the most value-engineered range of rotators available. All three, the Simple Spin, REVO and RevoPRO, are available today - contact your local Rosco Dealer for pricing.