Spectrum Elements: Rosco adds another member to the ASC!

In this new series of posts that we're calling Spectrum Elements, we'll take a closer look at the elemental building blocks of Rosco - the individual employees that make the company function on a daily basis. This first post was inspired by one of our colleagues experiencing a truly rare honor.

Very few companies in our industry can say that they have membership in the American Society of Cinematographers. First, a person has to be invited to join and then the membership has to vote you in. Rosco can now say that we have two associate members in this prestigious organization: Stan Miller and now Jeff Treanor. This installment of Spectrum will introduce you to the ASC's most recent inductee, Jeff Treanor, ASC: 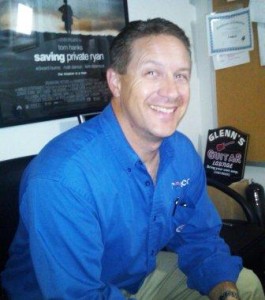 Jeff Treanor is a rare breed. He is one of the few people in Los Angeles that can call it his native home. Jeff was born in Hollywood and raised in La Crescenta, California - approximately 12 miles away from Rosco's Glendale office.

He earned a B.A. in Behavioral Studies from The Master’s College in 1990 and shortly thereafter became a Deputy Sheriff for Los Angeles County. 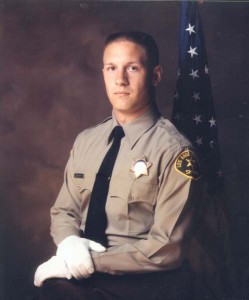 Jeff served as a Deputy for several years in a variety of assignments, including downtown Los Angeles during the riots in 1992.

After leaving the Sheriff’s Department in 1997, he entered the film industry working as the Assistant Manager of the Expendables store on the Warner Hollywood lot. When Warner sold the studio, he helped start Quixote Studio Store. After another studio stop Jeff spent a considerable amount of time in the theatrical side of the industry selling cables, connectors and distro at TMB.

Jeff joined Rosco Laboratories in 2006 as the West Coast Theatrical Sales Representative. In 2007, when the position of US Film and Television Representative for Rosco was offered to him, Jeff jumped back into the film industry to take over, what has been deemed by many as, 'The Best Sales Job at Rosco.' Jeff’s current duties for Rosco include working closely with our dealer network; traveling around the country to support the crews by visiting them on the sets and locations of their respective television shows and feature films; hosting product demonstrations and workshops for Cinematographers, Electricians and Grips; as well as teaching workshops and seminars for Cinematography and Set Lighting students at film schools.

Jeff, on location, working with the crew of the TV show Justified

In 2010, Jeff was told that he was being considered to be invited into the American Society of Cinematographers as an Associate Member. He recalls, “I thought it was a joke at first. To me, it was so far outside the realm of possibility that I never thought it would go anywhere. Associate Members are people like Stan Miller and Mole Richardson’s Larry & Mike Parker, not some knucklehead like me.” But with ASC members like Francis Kenny, Johnny Simmons and Richard Crudo sponsoring him, Jeff returned from a business trip to find an invitation to become an Associate Member waiting for him on his desk. Besides his three sponsors, Jeff has truly appreciated the support of many ASC members including Christopher Baffa, Affonso Beato, James L. Carter, David Darby, Frederic Goodich, Stephen Lighthill, Denis Maloney, M. David Mullen and Daniel Pearl. “I still didn’t truly believe it until I received the plaque. Then it sunk in…kind of.” 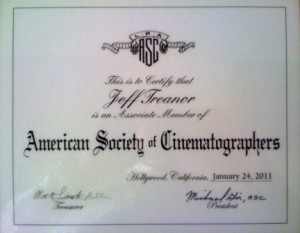 Jeff says, “I owe this all to Stan Miller and Rosco. If it weren’t for Stan's leadership over the past half-century, or the support of a company that allows me to do my job with integrity and pride, there’s no way this could have happened.”

Jeff married his college sweetheart, Stacy, in 1991. They, and their three sons, Kevin, Brian and Jason, live in Santa Clarita where they are active in church, school & athletic activities and where going to the movies means Jeff making his family stay until after the end credits finish rolling. 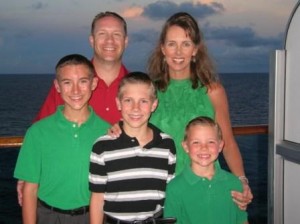