In case you haven't heard - Rosco turns 100 years old this year. We asked Stan Miller - who's run the company for 52 of those 100 years - for a collection of memories on how the business began, what the industry was like in the 'early days' and how the company, the industry and the products have evolved over the past 100 years. In this installment - you'll learn the background of the Rosco Laboratories name and how today's theatrical dealer was born.

We know that the company was founded in 1910 in New York by Sydney Kelsey Rosenstein when he was 24, but we don’t have many details. Rosenstein was a chemist and his first products were “Colorine,” a transparent dipping lacquer for coloring small light bulbs and “Opaline,” a translucent lacquer. 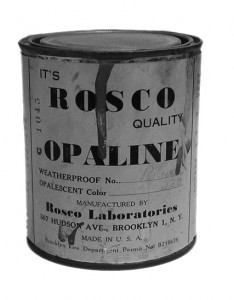 He apparently wasn’t too sure of the future direction of the company because he named it “Rosco Laboratories;” the “R O S” from “Rosenstein” and “CO” from “Company.” “Laboratories,” for a chemist, would have been the most general term, indicating that he had no idea what Rosco was ultimately going to be doing. It worked out well in later years when he tried a number of markets and the non-specific name proved to be no impediment. For example, located near the Brooklyn Navy Yard, Rosco received a “Request for Bid” in error in 1942. The navy needed 3,000 gallons of grey paint to repaint a destroyer. Although there was no Rosco Paint in 1942, Rosenstein never hesitated, he found a source, quoted, won the order and delivered.

Years later we tried to get rid of “Laboratories”, but New York State said there were other “Roscos” and we had to keep it. While we were in Brooklyn, the “Laboratories” in our name attracted a steady flow of strange people to our door with containers of unidentified fluids that they wanted “tested.” 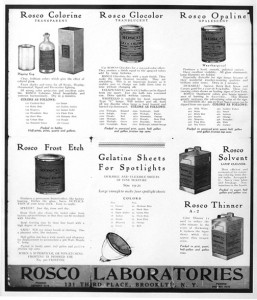 In the early 1900’s, bulbs were available only in clear, not frosted and not colored. If you owned a Broadway theater you had to color your own marquee lights. Rosenstein developed customers among the stage electricians for his Colorine and Opaline which he mixed in Brooklyn and delivered to Manhattan. His promotional material featured the prophetic line, “We color the night lights of Broadway”. Within a few years, Rosco would be outside on the marquee and inside on the stage lights. 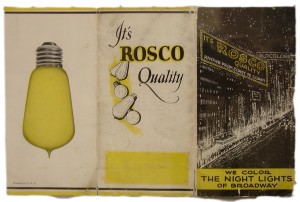 We Color The Night Lights On Broadway. One of the first print brochures.

He later developed a significant business in chemical products for movie theaters, the largest being film cement for splicing film. Most motion picture film was acetate-based. To cut and splice a section or make a repair, a special adhesive was required and that was “Rosco Film Cement” (or Kodak Film Cement or…). We sold gallons and pints to professional film exchanges and one ounce bottles to amateurs. Colorine was flammable, but the film cement was HIGHLY flammable. Rosco continued to make and package film cement until the 1970’s.

What now seems like a strange combination of products had a logic at the time it evolved. The movie theater was an entertainment center, with both on screen and live entertainment. There was a stage show between the two halves of the “double feature”. Therefore, the dealer supplied his theater customers lamp dip for the marquee bulbs, film cement for the booth and gel for the follow-spots.

Coming up in Part 2 - From Gelatine to Roscolux

Rosco SoftDrop The Easiest Backdrop Ever