When it comes to covering a political convention, it’s all about being nimble, setting up fast and making your A-grade anchors look great. So, when we found out that the Rosco Silk 210 was used to light up two of the most high-profile news desks at the DNC – we had to share those stories. 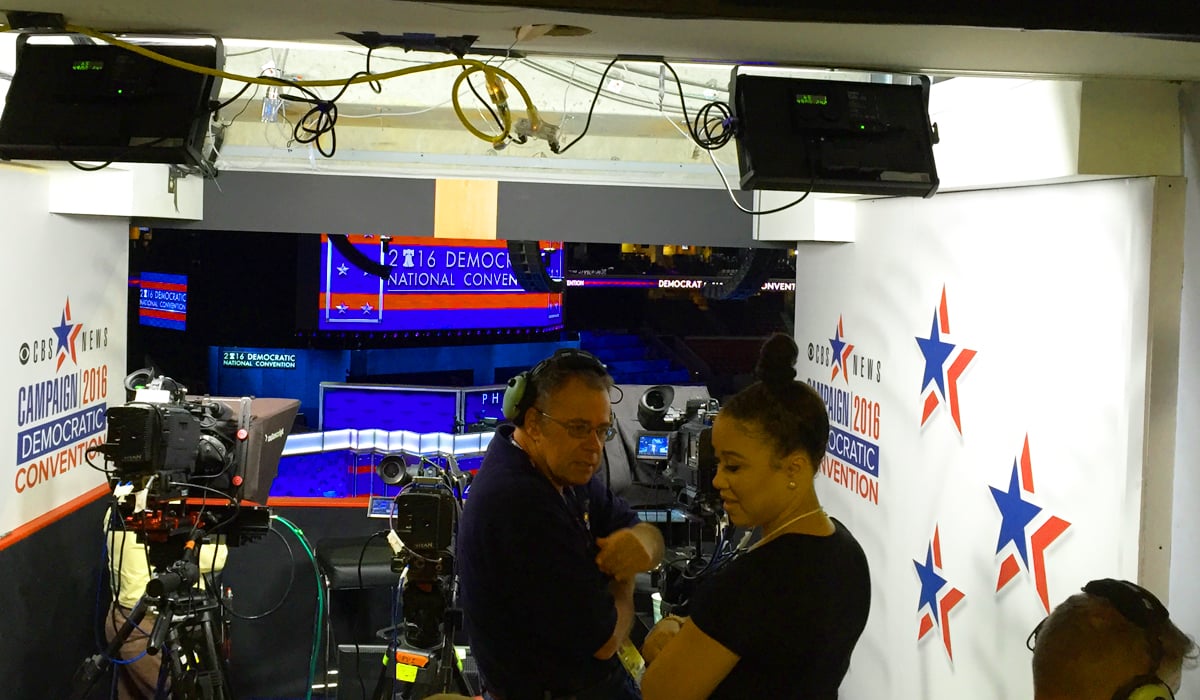 The first story comes from Marc Bress who was responsible for lighting the CBS News set at the DNC in Philadelphia. 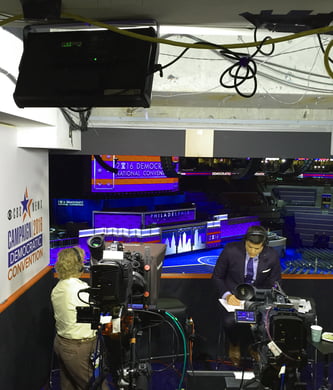 The DNC was hosted by the Wells Fargo Center in Philadelphia, PA – home to both the 76ers and the Flyers – which was built to hold over 19,000 people. Plenty of room – right? However, when the candidates and their teams, along with the throngs of delegates and lobbyists, arrived – all that space disappeared fast! This meant that there was definitely not enough room for newscasters to set up a full-blown broadcast studio on site. The crews had to make do with what they had.

CBS News set up their DNC studio inside one of the Wells Fargo suites. As you can see, Marc not only didn’t have much space to work in, he also had very little ceiling height to work with. Marc was able to light the four people at the news desk using only two of Rosco’s Silk 210 LED fixtures that he was able to bolt directly to existing door channel inside the suite. When he sent the photos of the Silks in action to us, the only accompanying text that came along with them was:

"Those two lights are kicking butt!! That's all that's needed."

As he was setting up inside the Wells Fargo Center, Marc Bress noticed that the Good Morning America crew was also using the Silk 210’s in their lighting setup. He found it interesting, so he captured a few photos of their set and sent those to us as well. 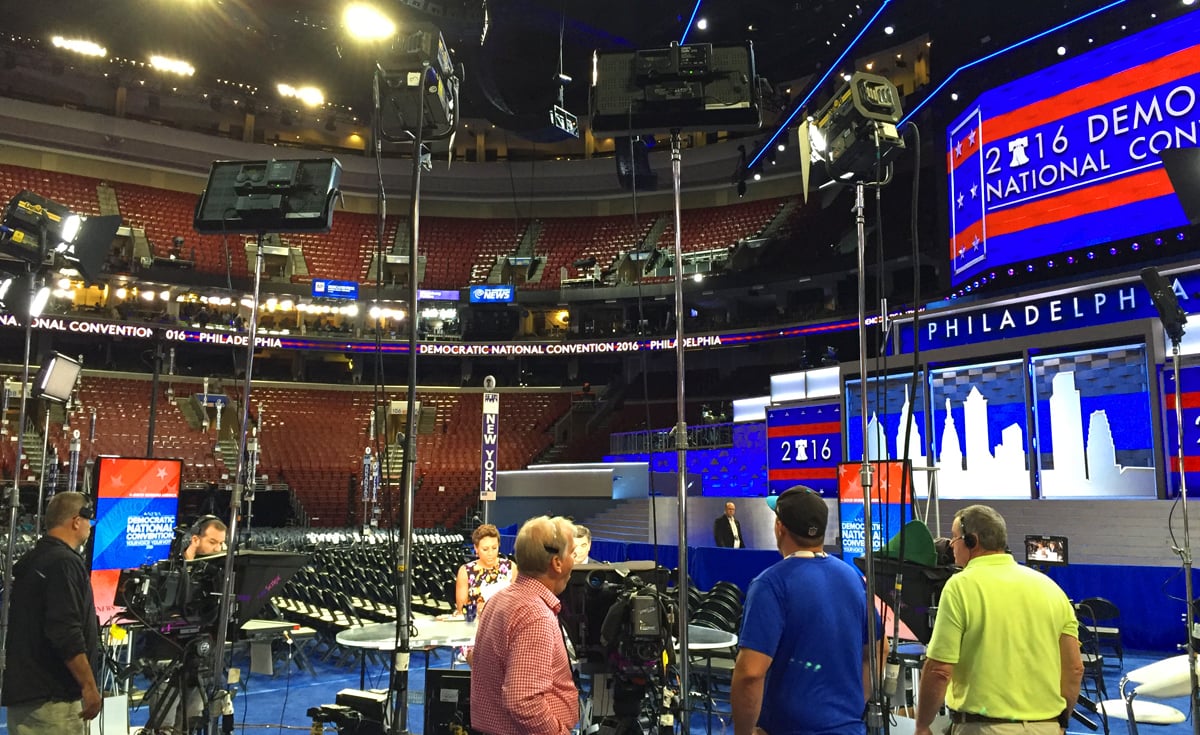 During the convention, Philadelphia, and the surrounding markets, had run out of the essential things a large metropolitan area needs to host a successful convention, including: hotel rooms, airline flights, restaurant reservations – and lighting equipment! 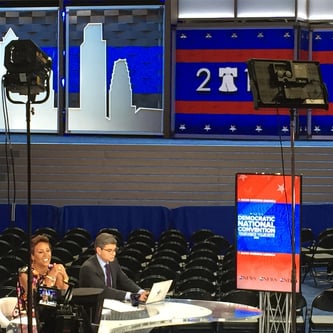 Thanks to Marc’s help, we later learned that the GMA lighting director on-site was Mark Janeczko. When we reached out to Janeczko to inquire about his usage of the Silk 210 at the DNC, he responded:

“I had never actually laid eyes on the Silks before the DNC. It was a 'fortunate for me' substitution by the shop (Boston's High Output) who had been wiped out of gear during the convention.”

The Good Morning America set was located down on the floor of the Wells Fargo Center, which gave Janeczko a little more room to work. He ended up lighting the GMA set using four Silk 210’s, along with a handful of Desisti fresnels.

In his message to us, Mark Janeczko reported:

“The Rosco Silk 210’s provided a beautiful, soft base layer of light for GMA. I would definitely recommend them and I will definitely seek them out down the road.” 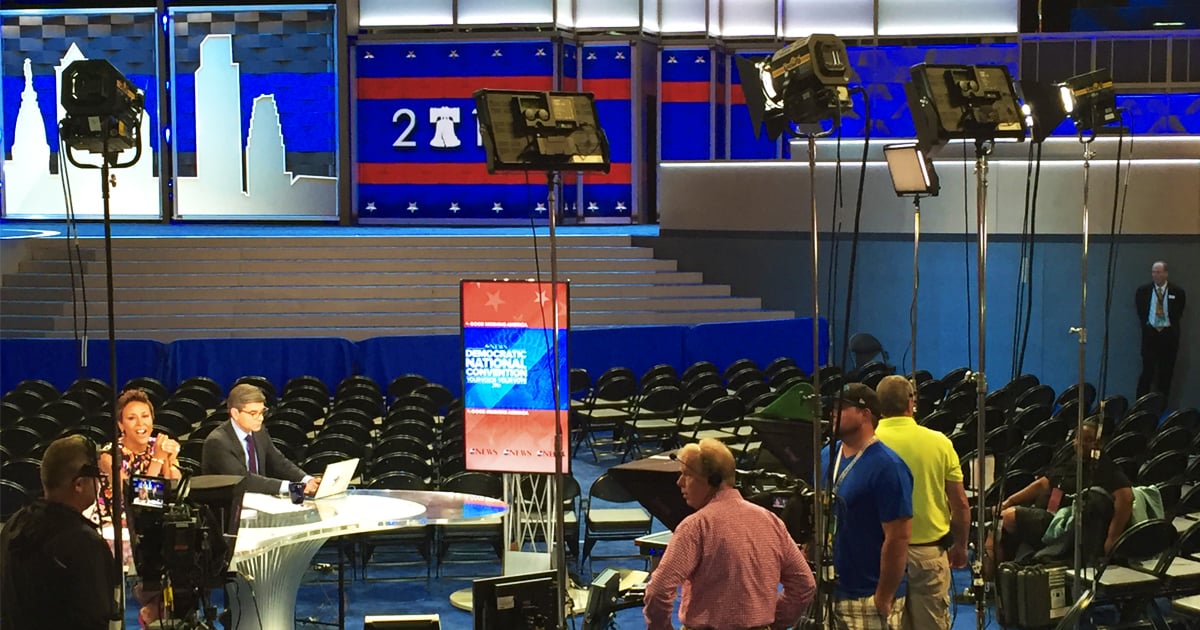 When it comes to lighting the news – especially when it comes to important events like the Democratic National Convention – lighting directors are challenged with balancing the constraints of the location with making sure that the anchors are lit properly and in a flattering manner. In this case, both Marc Bress and Mark Janeczko relied on Rosco’s Silk 210 LED fixture to illuminate their news sets at the DNC in Philadelphia – and they were both thrilled with the results. Be sure to visit the Silk 210 web page to learn more about our powerful, portable LED fixture the next time you need a softlight for your broadcast.